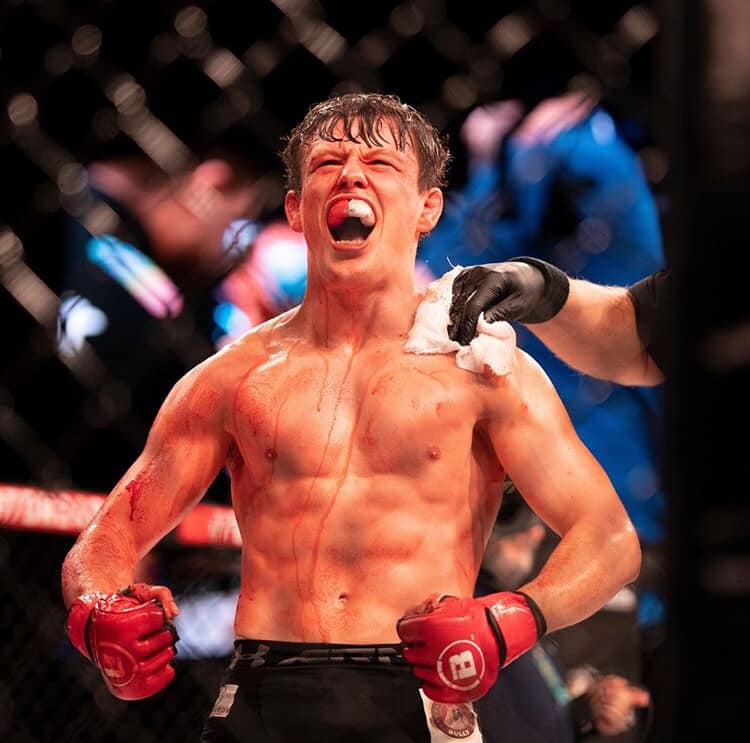 Fresh from his big recent victory at Bellator MMA giving him an undefeated pro record of 2-0 our featured fighter of the week is none other than professional mixed martial artist and former Team Ireland representative, 24 year old Ciaran Clarke of IMMAA gym SBGI under head coach and IMMAA president John Kavanagh. Having represented Ireland on five separate occasions at the IMMAF championships across the world Ciaran graciously agreed to give us an insight into how being a member of the Irish Mixed Martial Arts Association and the opportunities it provided have prepared him for a successful career in the professional MMA ranks.

Growing up in Drogheda, Co. Louth Ciaran considered himself to be a typical teenage boy who found it difficult to stay focused in school and as a result would act out and regularly find himself in troublesome positions. Unfortunately Drogheda has gained a reputation in Ireland as being a hotspot for drugs, gangs and criminal activity which is too often seen as a tempting lifestyle for teens in the area to enter into, but thankfully Ciaran stands proud today as a shining example for young people in the area that finding your passion in life and working through adversity is a much more desirable alternative to venturing into the seductive but destructive world of lawlessness.

Ciaran’s first introduction to martial arts was at age 12 when his brother Daryl convinced him to join the local boxing club, but never chose to compete due to a recurring hand injury. He admits that while he enjoyed the training, he had not yet learned the self discipline and dedication it requires to excel in martial arts and so gradually fell out of the routine of attending training regularly and reverted to his troublesome teenage ways. At school Ciaran had heard his friends mention that they had begun training in MMA in a local gym taught by head coach Conor Dillon,who famously fought Conor McGregor in October 2010. Ciaran was intrigued by the idea of joining MMA but his ego held him back as he was worried that he would be defeated in training by the people who had been training for a longer time than him. Eventually he decided to overcome his initial reservations and joined in his first MMA class at No Fear MMA where he surprised himself and others in the class by being able to submit members who had been training for a number of months.

Unfortunately his lack of concentration at the time and dislike of structured routine meant that he found it difficult to focus at school and would resort to messing and breaking the rules which led him to be expelled from his secondary school. With no other school in the area willing to accept a teenager with a troublesome reputation Ciaran was enrolled to Youth Reach, an educational centre for young people aged 15-20 years old who had exited mainstream schooling without a formal education, which he claims was an incredibly character building experience which helped to transform him from a boy to a man. Ciaran stated that it was a whole new experience to go from a mainstream school where he felt as though he was treated as a child to a school where he was on a first name basis with the teachers and was treated as an adult with dignity and respect. He recalls one specific event where he had misbehaved in class and expected to be punished by the teacher but instead the teacher simply stated “we’ll see how mature you are by the end of the year”, Ciaran was taken aback at this unexpected response and took it as a personal challenge to prove to his teacher that he was capable of behaving in a more mature fashion.

Ciarans MMA training quickly brought him to the realisation that his foolish and disruptive tendencies would not be tolerated in the gym and would be detrimental to his training and and success as a fighter, he learned that he would need to improve on his concentration skills if he wanted to progress in his combat training.

He quickly realised that he had a natural talent for striking and grappling and became addicted to learning as much information about fighting as he possibly could, so when the opportunity arose for his first MMA fight at 16 years old on a local fight show Ciaran accepted it without hesitation. Unfortunately the fight did not go as Ciaran had hoped and he was knocked out in 36 seconds into the first round after a failed armbar attempt. Rather than becoming discouraged or disheartened by such a devastating loss Ciaran pinpoints this exact experience as being the moment that made him realise he was willing to do whatever it takes to become the best fighter he could possibly be. He stated that once he regained consciousness the first thought that came to his mind was that he enjoyed every second of that fight and could not wait to do it again. Even at such a young age Ciaran had come to the realisation that many more mature fighters can often fail to understand – that a loss is not a sign of failure, it is an opportunity to learn and grow. He believes this to be a pivotal moment in his career because it was the worst thing that he felt could have possibly happened to him at the time, to be knocked out in a matter of seconds in front of all of his closest friends and family, but to experience such a crushing blow and still enjoy the experience and not lose his passion for the sport only reinforced his belief that he was a true fighter at heart.

At the time Ciaran and Daryl were the only fighters of their size and experience level at the gym and so decided that it was in their best interest to switch to SBG Ireland, even though this required travelling daily by bus and the Luas to get to training, it was a sacrifice they were willing to make to train under head coach John Kavanagh and alongside his team of accomplished athletes.

When questioned about the highlights of his career to date Ciaran stated that his experiences of competing at the IMMAF tournaments are some of his most cherished moments in MMA. Ciaran was selected to represent Ireland at the IMMAF MMA Championships on five separate occasions in Las Vegas, Bulgaria, Romania and twice in Bahrain. He claims that the experience of competing at the IMMAF Championships improved his knowledge and abilities as a fighter immeasurably and that these events were invaluable in preparing him for his professional career. Although he also admits that his greatest regret in his amateur career is that he was never awarded an IMMAF championship medal as he states that it was his dream to stand on the winners podium with the Irish flag draped across his shoulders, and is still to this day a heartbreaking component of what was otherwise an incredible experience.

Speaking of his career plans Ciaran says that he would like to stay focused on each upcoming fight at hand rather than look too far ahead into the future, and with two fights left on his contract with Bellator MMA he wants to ensure that he continues to provide exciting and triumphant performances within the cage as he has thoroughly enjoyed working with the promotion thus far and hopes that they will continue to have a long and prosperous working relationship for many years to come. He also hopes to one day return to the IMMAF Championships as a coach for team Ireland to guide and mentor new up and coming Irish athletes and help them to achieve their dreams. Ciaran also stated that he plans on giving back to his local community by working alongside schools to teach self defense techniques to children and hopes to lead by example as a positive role model for young people. Ciaran declared that all of his accomplishments and successes to date would not be possible without the help of his dedicated coaches, teammates, friends, family and supporters. He stated that he learned his tenacious work ethic from Conor Dillon early on and looked up to him as a role model in his teens. His Brother Daryl has acted as a key motivator, actively pushing Ciaran to improve his skills at every opportunity and Ciaran explained that he could never possibly repay his mother Barbara enough for all of her sacrifices through the years and the support she has shown him every step of the way throughout his journey. His coach John Kavanagh who has always gone above and beyond his call of duty to provide Ciaran with amazing opportunities and is always on hand to provide guidance and encouragement. Ciaran is endlessly grateful to his loyal girlfriend of 10 years Lauren, who has been by his side since before he ever stepped into the cage and who’s constant support and selflessness has been a monumental benefit to his career. Last but by no means least Ciaran expressed that he would like to give thanks to each and every person who has supported him in any way throughout the years, from donating to his fund to travel to the IMMAF championships, to buying tickets to see him fight, sponsoring his training or even cheering him on from the stands.

Ciarans passion for MMA, his country and giving back to his community were extremely apparent throughout the course of his interview. Recalling even the most difficult moments of his martial arts journey he spoke with such intense affection and fondness for each experience gained and lessons learned. Ciaran has time and time again proven himself to be a shining example of a role model for the young people of Ireland and we here at the Irish Mixed Martial Arts Association are incredibly proud of his achievements both in and outside of the cage and wish him nothing but the very best of success in what will undoubtedly be an extremely prosperous and long lived professional fighting career.