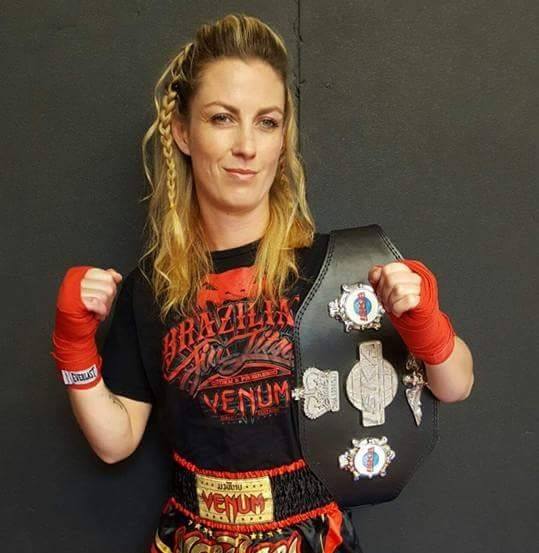 The Irish Mixed Martial Arts Association would like to show our appreciation to a person who has experienced the sport from all perspectives as a competitor, coach, parent and cutwoman and has been an invaluable source of help and support within the MMA community both at home and abroad, Mrs Deborah O’Sullivan of IMMAA club C-MAC MMA. Deborah not only runs one of the most successful MMA gyms in Ireland alongside husband Deano Wade but has also made her mark on the sport in many ways including being part of the only mother and child combination to ever compete in the IMMAF – International Mixed Martial Arts Federation championships in the history of the sport.
Deborah was introduced to martial arts in her teen years when she began training in traditional style shotokan karate and chinese kickboxing. After finishing school she met husband Deano at just 17 years old while working together at a local garage before going on to study applied biology in Tallaght. After having three children together Deborah returned to her striking training at Mulhuddart Boxing club and soon transitioned to training in kickboxing at Global Kickboxing Academy under head coach Jimmy Upton. Deborah’s clear talent for combat sports paired with her tenacious work ethic enabled her to go on to achieve the ISKA Europe super bantamweight title. The pair then began to coach striking classes at Coolmine Martial Arts gym before the owner at the time left and Deborah and Deano made the decision to take over the running of the club and transform it into what is now one of Ireland leading MMA gyms Combat Martial Arts Club, C-MAC Mulhuddart. Over the course of running the business and coaching classes at the gym Deborah’s caring nature drove her in search of acquiring the relevant knowledge to ensure the safety of her fighters. She was then introduced to Irish UFC cutman Joe Clifford when she enrolled in his first certified cutman cornercare course in 2013 and began to work alongside Joe on local shows and fight nights providing cageside first aid to contestants. In November 2015 Deborah travelled to Birmingham, England to compete at the first ever IMMAF European Championships where she was blown away by the level of professionalism she experienced there and decided to make it her goal to return to the IMMAF championships as an official in the future. Unfortunately recurring injuries including a dislocated knee and shoulder meant that Deborah was forced to retire from fighting, but ever the optimist, she chose to use this setback as an opportunity to focus on her coaching and cutwoman skills. Through her experience gained working alongside Joe on Irish MMA shows Deborah was chosen to travel to Romania, Prague and Bahrain (twice) to work as a cutwoman for the International Mixed Martial Arts Federation championships where she has consistently provided a high level of care, commitment and professionalism in her work. Deborah works tirelessly to support the Irish MMA team both at home and at international tournaments and has also had the pleasure of watching her son Alexander being awarded silver and bronze European medals and two bronze medals in the world championships as well as daughter Kiya winning a silver medal in the first ever youth world championships. Deborah expressed that becoming involved in Irish martial arts has improved her life in so many ways, not only making her physically stronger but mentally stronger too, she claims that training and coaching gave her an escape from the rat race of the mundane, monotonous routine that many people can so easily get stuck in and it gave her dreams, goals and ambitions to strive towards. When questioned about what the highlight of her career so far has been Deborah said that experiencing the electrifying and energetic atmosphere of the IMMAF championships and watching her children being awarded IMMAF championships medals has been the proudest and most gratifying experience of her life and are memories she will cherish eternally. Deborah also stated that she has made lifelong friendships within the MMA community and has been incredibly fortunate to meet and work alongside such wonderful, driven and passionate people within the industry, specifically giving thanks to Joe Clifford, and “Uncle” Bob Plant for their unwavering support, guidance and mentoring throughout her career. Deborah also mentioned that her family have been her source of motivation and inspiration, with husband Deano and their children offering their endless encouragement and support. Having already accomplished such incredible and admirable achievements within the sport Deborah claims her journey is far from over yet as she states that she is looking forward to watching the progression of her CMAC fighters in the future and hopes to one day attain work as a cutwoman on a UFC show. With the UFC having recently announced their long awaited return to Ireland we at IMMAA are hopeful that Deborah’s dream may come to fruition sooner rather than later and we simply cannot wait to see what the future holds in store for her.