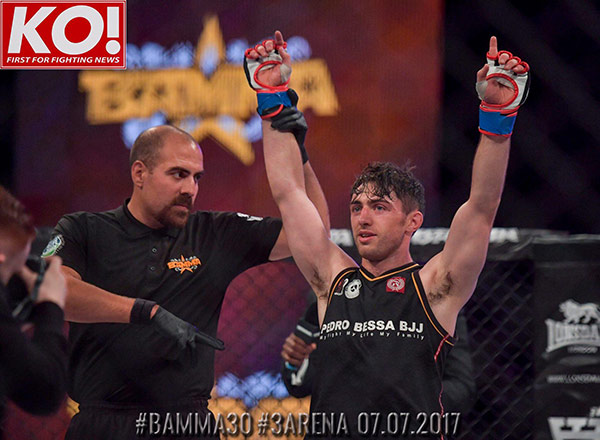 For this week’s featured article we would like to highlight the achievements of IMMAA Club MMA Cork, run by head coach and professional mixed martial artist Arann Maguire. Having previously travelled to the IMMAF – International Mixed Martial Arts Federation championships as a Team Ireland Coach, Arann is a proud member and supporter of the Irish Mixed Martial Arts Association.

Arann’s journey into MMA began like many others – with a hard hitting reality check. Having begrudgingly agreed to accompany a friend to a Muay Thai class at Sitjaipetch Muay Thai & Martial Arts Centre Cork in 2007 Arann believed he would have an advantage over some of the other beginners in the class, having received his Black Belt in Shotokan Karate 3 years previously. He laughs as he recalls how he was paired by the coach with a petite young woman for striking rounds on the pads and believed he would have to ‘go easy on her’ as he didnt want to hurt her. He didn’t realise just how wrong he was until she progressively started to encourage him to put more power into his strikes. At this point, he was already at his maximum output and still couldn’t budge her, he realised very quickly that his previous experience wouldn’t serve him as well here as he had previously hoped. He recalls feeling completely exhausted after that first class and needed to rest for two days afterwards as his hands would not stop shaking. Other than his pride taking a big hit, it proved to be a blessing in disguise, as it was the wake-up call he needed. He vowed to never experience feeling so weak and unfit again. He continued to train in Muay Thai as well as the MMA classes which were being held upstairs for 8 months before taking a break from training.

In 2009 Arann decided to resume his training when his cousin suggested trying a Brazilian Jiu Jitsu class in Bjj Cork under Black Belt Liam Beechinor which was based on MacCurtain Street in Cork City Centre. This was Arann’s first introduction into traditional Brazilian Jiu Jitsu as his previous grappling training had been more MMA focused. Apparently not really learning anything from his previous reality check, he once again made the rookie mistake of judging a book by its cover when it came time to participate in his first competitive roll. He
unwittingly partnered with a Purple Belt who did not look like a
particularly skilled or athletic opponent and Arann felt confident that he would easily get the better of him. He quickly learned the importance of technique over strength and recalls that first roll as being ‘like nothing he had ever experienced before’ as he felt so utterly powerless and under the complete control of his opponent.

He decided to fully commit himself to his training by attending 4 sessions in BJJ Cork and 2 sessions in Cork Thai Boxing Gym (who also trained in MacCurtain Street) per week. Although he was seeing vast improvements in his overall game, he admits that he was still regularly and consistently being beaten by his teammates as they were always focusing on one specific sport while he was trying to mix them. He would not let it discourage him however. In 2011 Arann made his amateur MMA debut on Battlezone and remembers his coach Liam putting him through the toughest and most physically demanding period of his life in the lead up to his fight. However the old saying ‘train hard, fight easy’ proved to be true as Arann debuted with an impressively dominant performance resulting in his first victory. Having his hand raised in triumph solidified his belief that he was destined to
be a Mixed Martial Artist and would commit his life and career to chasing that lifestyle.

In 2013 Arann proved his determination to win the fight at all costs when he broke his leg within the first few seconds of his first title fight on Battlezone when he checked his opponents leg kick, but continued to fight on recalling “That’s the beauty of MMA – you can still fight even when you can’t stand” leading him to win the fight and the Featherweight title belt. Up to this point, Arann’s MMA training had consisted of two separate aspects – BJJ and Muay Thai. His coach then suggested that while he took some time off to mend his broken leg he
should consider setting up an MMA gym within the premises. Arann thought this was a great idea as he could finally incorporate both aspects of his training into one class and began coaching three classes per week in the newly established MMA Cork.

Upon returning to training, Arann decided to drop down to the Bantamweight Division in the hopes of attaining two title belts in two separate weight categories, a decision which he regrets making as he did not enlist the guidance of a nutritionist. He did not have the relevant knowledge to reduce his weight gradually and safely by himself which resulted in him never fully performing to his potential. Despite winning the Bantamweight Title in 2016, he still maintains that he should have stayed at Featherweight. He believes that we oftentimes have an unhealthy outlook towards weight-cutting in MMA. We have this idea that we have to be bigger than our opponent in order to win. Which contrasts entirely with the historical concept of martial arts. “I’m actually very happy in particular with the new measures that the IMMAA and SafeMMA have introduced in Ireland with regards to same-day weigh ins. The concept that people starve and dehydrate themselves a day and a half before the fight in order to pretend they weigh a certain weight, only to be potentially two divisions heavier by the time the actual fight comes around makes no sense even at Professional level, nevermind at Amateur. I only wish it had been there when I was coming up.”

As Arann continued to pursue his career, the MMA Cork team, whose numbers had been growing steadily, were proving to be his greatest asset as each of his students had progressed so rapidly that they were the perfect training partners for Arann to test his skills against in the lead up to fights. When BJJ Cork eventually moved premises, MMA Cork (who had been sharing the same training space) was thrilled to realise that membership numbers had grown to the point where they could now afford to rent a premises of their own. They hit the ground running and began providing a wide range of extra MMA Classes.

After enduring a decision loss in his Professional debut in 2016 against a solid, well rounded opponent and then having to pull out of another fight afterwards, Arann conceded that dropping to 61kg was taking too much of a toll on his body and after that, he decided to move up in weight to fight at no less than 63kg. “It was the right move for me, I felt much healthier.” He went on to win his next three fights before receiving a multi-fight contract with professional MMA promotion Cage Warriors through his affiliation with Alpha Fighter Management. Although Arann was given the opportunity to fight in front of his hometown crowd when Cage Warriors 110 came to Neptune Stadium in Cork in November of
2019 he chose to delay his own Cage Warriors debut in favour of putting his students needs ahead of his own, as MMA Cork fighters John Mitchell and Jacques Maguire made their professional debuts on the card. As both a coach and fighter Arann felt that if he were to fight on the same show
as his students it would result in either neglecting his
responsibilities as a coach or his focus as a fighter and so he chooses to prioritise his coaching duties by fighting on separate shows to his students. Although he admits it can be difficult at times to find the right balance between being a coach and professional athlete, he believes his experiences as a fighter have greatly benefited him in his coaching
abilities as he understands the sport from a fighters perspective and has first hand experience of the obstacles his students will face as competitors.

He reveals that he must consistently work hard to develop his skills in order to stay ahead of his students as they are progressing at an impressive rate but as a coach he is looking forward to the day when his students abilities surpass his own, although he will continue to push them to their limits until that time comes. When questioned about his most cherished accomplishments to date, Arann claims that he is most
proud of the atmosphere he and his team have built at MMA Cork, stating that his goal when opening the club was to create a training space where everyone is equal, everybody feels welcome and no one is superior to anyone else, regardless of their achievements or experience. He believes
they have succeeded in creating this environment within the gym and is very grateful that the gym has grown to such a level that athletes are starting to travel from around Ireland to come and train with them. When asked about the clubs plans for the future Arann expressed that their focus is not on attaining belts or titles but simply pushing themselves to be the best fighters they can possibly be and building their reputation as a formidable force in the world of MMA.

Although Arann regrettably did not participate in the IMMAF Championships as a competitor during his amateur career, he travelled to the 2018 European Championships as an IMMAA coach for Team Ireland. He claims that our sport has evolved at such a fast pace that the standards of fighting demonstrated by the IMMAF amateurs today often exceeds the standards of those in the professional ranks only a few short years ago. Like many others within our community, Arann has experienced negative public perceptions of MMA as a brutal and barbaric sport but believes that the work of the Irish Mixed Martial Arts Association and SAFE MMA are helping towards improving the public perception of the sport and the safety of its competitors. He declares that he is very proud to be affiliated with IMMAA and is extremely grateful to its committee members and supporters for being the driving force behind attempting to acquire government recognition for MMA in Ireland, along with providing cover and protection for MMA clubs, coaches and athletes across the country. The Irish Mixed Martial Arts Association would like to extend our thanks to Arann for his continued support and for taking the time to provide us with an insight into his club and career. We wish him and his students at MMA Cork nothing but the very best of success as they continue to grow and prosper as proud contributors to the Irish MMA community.
Photo credit to KO Media