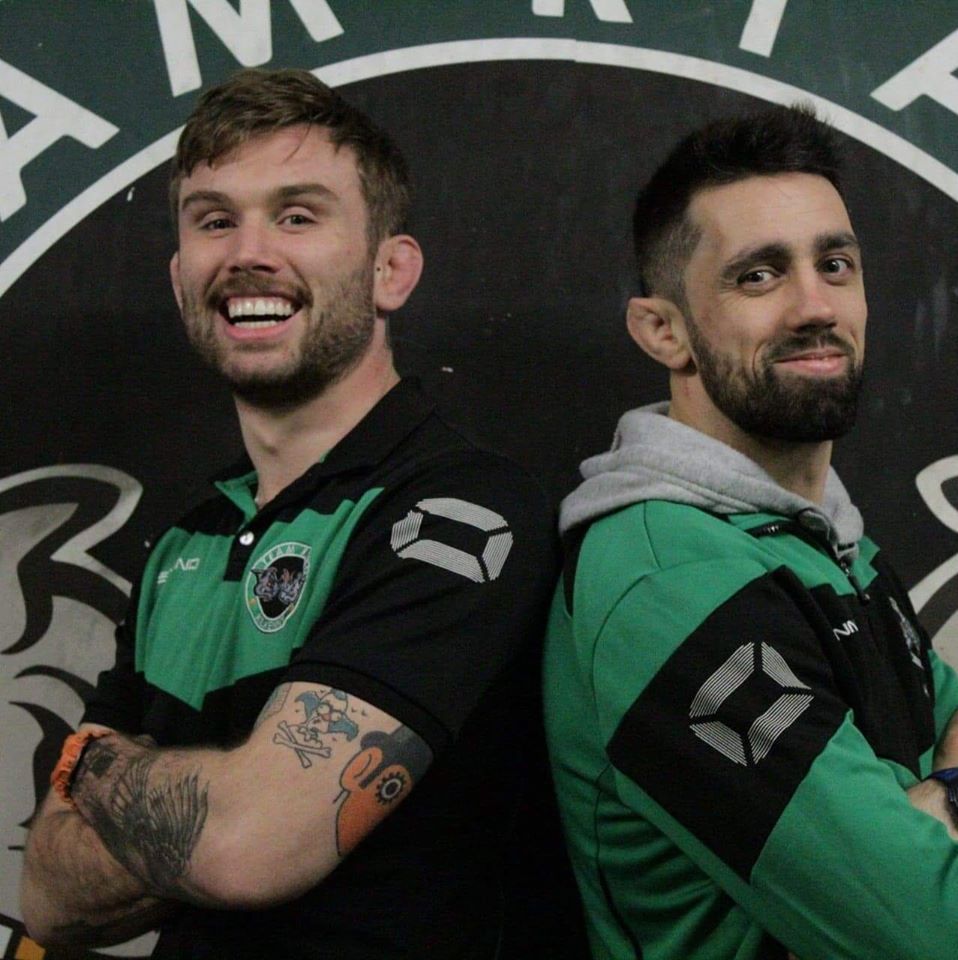 Myles introduction to martial arts began at age 15 when he began training in kickboxing at Top Pro gym Kilkenny under world renowned professional kickboxing champion Paul Cummins where he was fortunate enough to train alongside a prestigious and experienced team of kickboxers including four world champions. Using his J1 visa to travel to California Myles began training in mixed martial arts at SBG NorCal in Berkley, California under head coaches Alan and Lily Pagle. Shortly after returning to Ireland he joined SBGI in Dublin under head coach and IMMAA president John Kavanagh before moving to Team Ryano under Head Coach and IMMAA Chairman Andy Ryan in 2013.

With a sporting background in soccer Mick began training in MMA at age 22 in 2008 alongside Myles at Top Pro Gym in Kilkenny when he was searching for a new venture to challenge himself with. While initially the sport seemed to be a minefield, things eventually began to fall into place after a few months of training when he claims the techniques he had been learning finally ‘began to click’. Myles noticed Mick’s improvements in his training and offered him a debut fight against Tommy Finn on Tuffnut Promotions at Whites Hotel in Wexford. Mick stated “Back then there were no MMA technique tutorials on youtube. Your only opportunity to learn was from your coach at the gym, so in a way that really brought us all closer together as a team.”

Mick stated that while he suffered from nerves & anxiety like all fighters do, these feelings would really only kick in a couple of hours before it was time to make the walk to the cage, until his last year of fighting when it got harder to be as calm as he once was. Earlier in his career Mick stated “The doctors that would do my pre-fight medical clearance backstage used to be amazed at how low my heart rate was. They used to jokingly say “You do know you’re about to fight, right?’” Whereas Myles chose to utilise visualization and meditation techniques in an attempt to calm his pre-fight nerves.

Introduced through Myles, Mick had trained in Team Ryano HQ a few times while in fight preparation but while studying for a personal training course in Dublin Mick took full advantage of being in close proximity to the gym  and chose to train in HQ every Thursday & Friday consistently for 5-6 months where he claims he was warmly welcomed and his Brazilian Jiu Jitsu skills improved tenfold.

When the opportunity arose for Mick and Myles to open their own gym there was no doubt in their minds that they wanted their new gym to be affiliated with Team Ryano, and so in early 2017 they launched Team Ryano Kilkenny where they coach a wide range of classes catering for childrens, teens and adults including MMA, BJJ, K1, yoga, personal training and strength and conditioning.

Myles currently holds a professional MMA record of 11-7 and claims that while his career is far from over yet, he considers his fight against Peter Queally in the 3 Arena in Dublin at Bellator 217 to be the highlight of his fighting career to date. When asked what advice he would give to young fighters starting out he stated “You need to be at peace with the process of the fight. This is an intense sport so don’t try to resist your emotions, learn to embrace and channel them instead and don’t be so hard on yourself. Mistakes are going to happen from time to time, don’t dwell on them too much, try to focus instead on how you can learn and grow from the experience.”

Mick sustained an active MMA career between 2009 and 2017 and fought twice at the 3 Arena at Bamma 24 and 30. He is now retired from competing in MMA and chooses to focus instead on his Brazilian Jiu Jitsu and coaching abilities but when asked about what he considers to be the highlight of his fight career he believes his fight against Sean Tobin  at Battlezone in Cork in November of 2013 to be a performance he is particularly proud of. He states “I felt like the underdog going into that fight against a hometown opponent who had the support of the crowd but that only made me even more motivated. There was no posing or showboating, just a good clean scrap between two lads who love to fight. I was really proud of my endurance and conditioning in that fight and was very active off my back. Sean put up a good fight and it felt so satisfying to finally execute a rear naked choke in the 4th round to win the title.” When asked what advice he would give to young athletes beginning their MMA journey Mick stated “Train smart and take injuries seriously. Sport psychology is a huge advantage to any competitive athlete and is too often overlooked especially in combat sports. Sometimes the biggest obstacle a fighter can face is their own mind and learning how to overcome negative thought patterns builds great mental strength. Later on in my career I enlisted the help of sport psychologist Rich Shanahan who benefitted my training greatly and helped me to feel confident in my abilities as a fighter.”

Both Myles and Mick are currently brown belts in Brazilian Jiu Jitsu under Team Ryano Head Coach Andy Ryan and while they are both devoted to their training and progression within the sport, both claim that their focus is not set on achieving black belts but simply on continuing to learn and progress their skills and abilities. Myles stated “Andy has been an incredible mentor throughout my time training under him. He genuinely cares about each and every fighter and is always on hand to give help or advice when needed.” Mick claims “Andy Ryan made me feel welcome in HQ from the moment i met him, he’s a good genuine person who wants to see you do well & be the best that you can be. I’m a quiet type of guy especially when I’m in certain surroundings but Andy & all the HQ crew always treated me brilliantly & always pushed me 100% in training. Andy is straight up, if your training is good & progressing well, he will tell you. If you’re not training to your full ability or potential, he will tell you. Andy’s support over the last few years has been great & I’m glad that guy is my Head Coach.”

Team Ryano Kilkenny have built a strong team of fighters since its establishment in 2017 including stand out talent Eoghan Chelmiah who represented Team Ireland at the IMMAF 2018 World MMA championship and the 2019 European MMA championship. Mick claims “Eoghan is a super talented, dedicated and disciplined fighter. He has huge potential and is setting a great example for our younger members.” Myles stated “Eoghan is dedicated, humble and knows exactly what he wants and is willing to put in the time and effort into his craft. What I’m most proud of about Eoghan is how well put together he is in regards to his personal life, he is well educated and an extremely loyal and hard working young man.”

Both head coaches expressed their enthusiasm for being affiliated with the Irish Mixed Martial Arts Association with Myles stating “IMMAA stepped up to give Irish MMA a fighting chance to become a recognised sport in Ireland. It provides structure, regulations and a clear path to guide our competitors through their MMA journey.” According to Mick “IMMAA has been the best step forward for Irish MMA for a lot of positive reasons. Beside it obviously helping MMA become a recognised sport in Ireland, as regards Irish MMA athletes it gives them direction which is important as an athlete going forward in their career.”

The Irish Mixed Martial Arts Association are very grateful to Myles, Mick and their members at Team Ryano Kilkenny for their ongoing support in the pursuit of national recognition for MMA. We look forward to witnessing their athletes progression and accomplishments within the sport in the future and wish them nothing but the very best of skills and success.