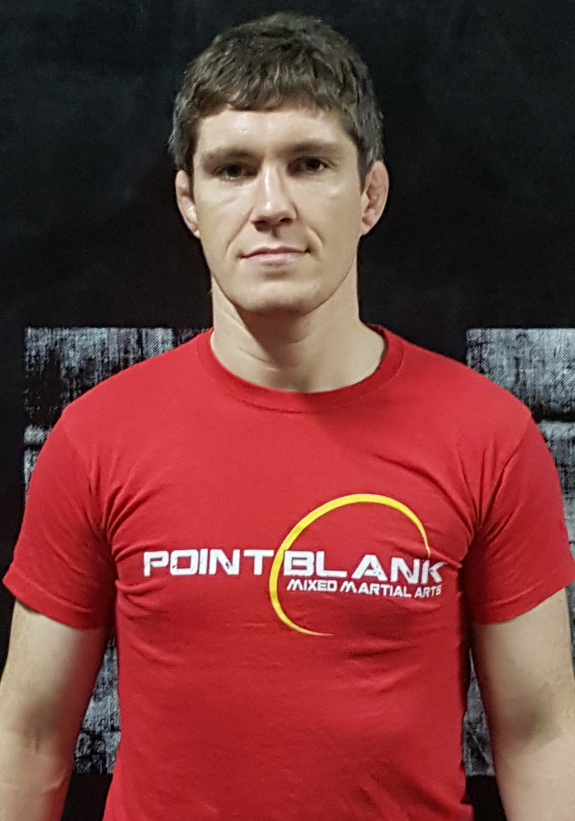 The Irish Mixed Martial Arts Association featured coach of the week is IMMAA Child Protection Officer and Head Coach of IMMAA gym Point Blank Submissions, Tim Murphy. As a true pioneer of Irish MMA, Tim has helped to pave the way for up and coming mixed martial artists to avail of a vast array of opportunities in order to progress their skills as competitive athletes within the sport.

Tim’s introduction to martial arts began at age 7 when he took up training in Taekwon-Do and subsequently kickboxing. In the following years he competed at numerous Irish and international tournaments and received his TaeKwonDo blackbelt in 1998. His many competitive achievements include winning gold medals at the WKA Kickboxing World Championship in Italy in 2002, the Irish National Open TKD Championships in 2003 and the Irish Open Kickboxing Championship in 2004.

In the early 2000’s his attention turned to MMA when he purchased a VHS video tape of UFC 3 and became intrigued by this new sport . He bought SBG founder Matt Thornton’s instructional Jiu Jitsu DVDs and began to study the sport alongside his training partners at the University of Limerick kickboxing club, which he ran in his spare time while studying for his degree in Informational Technology. Having worked incredibly hard to achieve a high level of success at tournaments both in Ireland and internationally in TaeKwonDo and kickboxing Tim embraced the opportunity to be a beginner in combat sports once again stating “It was exciting to pave new ground in a new sport.”

In 2004 Mark Leonard, who was the head coach of Point Blank Submissions at the time, launched the Irish MMA League fight promotion. The rules for the bouts included ‘no headshots’ in an attempt to slowly introduce MMA events, as Irish MMA was in the early development stages and the sport was widely regarded as barbaric by the general public. However the only fight at the event which allowed headshots was the main event ‘superfight’ between Tim and Mick Leonard of SBGI. Tim revealed that he felt much more nervous in the lead up to his first MMA fight than to any of his previous TaeKwonDo or kickboxing bouts. Tim was submitted via armbar 90 seconds into the first round but he would not allow this defeat to deter him from the sport and he committed himself to further developing his abilities as a fighter.

As MMA gyms were scarce at the time, training in MMA often required travelling long distances to attend classes. Tim spent a lot of time training alongside fellow pioneers of Irish MMA and IMMAA committee members John Kavanagh, Andy Ryan and David Jones who he claims were always very welcoming and happy to help. He recalls “With such a lack of MMA fighters and gyms in Ireland at the time it was common to end up fighting against the same people you had trained with and learned from.” He trained primarily in his club in UL during that time, with frequent visits to SBG in Dublin to train with John Kavanagh. Moving to Galway in 2007, he began training in Point Blank under Coach Mark Leonard. Tim maintained an active MMA career between 2004-2010 including a rematch with Mick Leonard on Tribal Warfare in 2008. Tim won the fight via a triangle choke in the first round in front of his hometown crowd in Galway which he describes as one of the highlights of his competitive career. He also fondly recalls one of his favourite early experiences within the sport was in 2004 when he took the opportunity to travel to Spain to train under former UFC heavyweight champion Antonio Rodrigo “Minotauro” Nogueira.

Since taking over the role of Head Coach at Point Blank Submissions from Mark Leonard in 2010 Tim has retired from competing in MMA to focus on coaching and competing in Brazilian Jiu Jitsu. He was awarded his BJJ black belt in 2017 from Rodrigo Medeiros of BJJ Revolution. He declared that his favourite aspect of coaching is seeing the progression of his students skills, abilities, and accomplishments. 2019 was a particularly proud year for Tim as a coach, as Point Blank Submissions member Cathal Manning transitioned to the professional ranks. He was also delighted to see Galway MMA spreading out from the city with Kevin Moran opening his own MMA/BJJ gym in Athenry.

Over the years Tim has experienced many negative prejudices towards the sport of mixed martial arts claiming “Nobody would ever ask the likes of Katie Taylor to justify her reasons for competing in boxing, yet we regularly see MMA fighters being asked to justify their sport. We have a great community of kind and respectful people in this sport and I look forward to the day when MMA can attain the national and global recognition and respect which it deserves.” When questioned about what advice he would give to people at the start of their MMA career Tim stated “Start slow, work on developing a skill set and focus on being technical and consistent. Gain as much experience as you can competing in all aspects of martial arts and take full advantage of the huge range of opportunities to compete available to fighters nowadays, which weren’t available when I was starting out. I think the IMMAF Championships are a fantastic platform for fighters to gain experience and recognition. Cathal Manning was able to fight three times in one week at the 2018 European Championships. It can often take fighters up to a year or possibly more to gain that much experience on shows in Ireland, and SBG Cork’s Ryan Spillane has just been signed to Bellator MMA through his achievements at IMMAF.”

As a committee member of The Irish Mixed Martial Arts Association Tim is a proud advocate for government recognition of MMA in Ireland. On top of his full time career as a software engineer and role as head coach of Point Blank Submissions gym, Tim has also been an incredibly valuable resource to IMMAA, consistently going above and beyond the call of duty as child protection officer to assist with many tasks including helping to prepare IMMAA’s application to Sport Ireland in attempt to make MMA become a nationally recognised sport. He claims “The Irish MMA community are doing really amazing things but not receiving the recognition they deserve, we need to make the public more aware of the positive influences MMA clubs have on their members and local communities. IMMAA provides the sport with formal structures, well defined rules and Ireland is setting the gold standard across the world in regards to safety requirements for amateur fighters. As a sport we face many unique challenges but we are committed to overcoming the obstacles that are in place and proving ourselves as respectable athletes worthy of formal recognition.”

The Irish Mixed Martial Arts Association would like to thank Tim for his vast contributions to the organisation and sport and wish him, and all of his members at Point Blank Submissions the very best of skills and luck in the future.