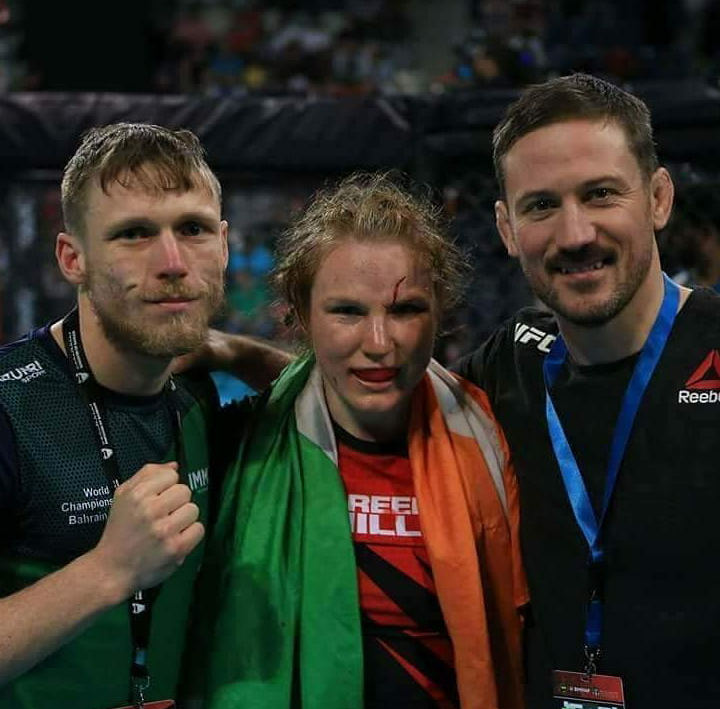 Alan’s introduction to martial arts began when he joined the shotokan karate club at 19 years old while studying for his degree in Sports and Recreation at Athlone Institute of Technology. He claims “I took to karate straight away, I had a couple of friends who slagged me over it, telling me that it was no good compared to other martial arts but I didn’t care because I loved it.” After 6 months of karate training Alan began searching for a club to train in closer to his home in Mullingar, he found Dave Doyle Kickboxing club and quickly decided to cease training in karate in order to focus on kickboxing which he describes as “Next level” in comparison to his previous training.

After competing in 4 kickboxing fights over a three year span he decided to broaden his horizons by travelling to Brisbane, Australia, where he searched for kickboxing gyms nearby but couldn’t find any in the local vicinity. Instead he stumbled across a Muay Thai gym, a sport which he was previously unfamiliar with. Alan quickly discovered his passion for Muay Thai and continued to train in the sport for 2 months before needing to leave the gym to participate in his mandatory farm work as required by his visa stipulations. He continued to train as much as he could on his own while working on the farm and was so determined to pursue his training further that he booked a trip to Thailand before returning home from Australia. Alan spent 3 months in Santai Muay Thai gym in Chiang Mai where he trained under 8 Champion Professional Muay Thai fighters and underwent an intense and vigorous training regime claiming “6 days a week we woke up at 5am for a 10-15km run to begin our 5 hours of training per day. In the lead up to a fight we would even run up a 1.6km high mountain.” He participated in his first professional Muay Thai fight before returning to Ireland where he searched for a Muay Thai club nearby, but upon realising that there were no active Muay Thai gyms in the midlands, came up with a plan to return to Thailand to continue his training.

In order to fund another trip to Chiang Mai Alan juggled two jobs working as a restaurant kitchen porter and a striking coach at Mullingar Grappling Club which was later named SBG Mullingar and is now Lakelands Jiu Jitsu, before returning to Santai Muay Thai where he trained for a further 6 months and even managed to break the record for the fastest mountain run time within the club that year.

Upon returning to Ireland Alan began training in Origins Muay Thai under Head Coach Paul Kelly and In 2015, at 24 years old Alan established the Relentless Muay Thai gym, he stated “I chose the name Relentless because I feel it describes my style of training and fighting.” He shared a premises with SBG Mullingar, for two years, focusing primarily on teaching classes geared towards adults, and moved premises twice more before finding a suitable location to accommodate Relentless’ rapidly increasing number of members.

In 2016 Alan met SBGI Mixed Martial Artist Danni Neilan through an online dating site. Danni had just competed in her first amateur MMA fight at the time and the pair bonded over their mutual passion for combat sports. Alan began coaching Danni’s striking and accompanied her as she represented Team Ireland at the 2017 IMMAF World MMA championships in Bahrain, where she fought four times in five days and was awarded a silver medal. Speaking of his experience attending the IMMAF World Championships Alan stated “I had previously competed at the K1 World Championships and was expecting something similar but I was completely blown away by the level of professionalism there in all aspects. It was like nothing I had ever experienced before, no other tournament compares to it.”

Alan chose to rename Relentless Muay Thai to Relentless Martial Arts and added a variety of different combat style classes. The gym is currently located in a 4,000²ft, 2 storey premises in Brosna Business Park in Mullingar. They cater to a wide range of martial arts enthusiasts offering classes for children, teens and adults across a range of disciplines taught by Alan, Danni and wrestling coach Darren McCormack.

Alan is particularly proud of the programme they have developed for their young members claiming “The levels of dedication and determination we see from our junior members is incredible, they always work hard and bring their A game so we created a training programme that caters to their needs and abilities and enables them to progress steadily. We divide our children’s classes up by age and ability, there are classes for 4-6 year olds, 7-11 year olds, an advanced class and a fighters class for those who compete. Our weekly children’s classes include 2 wrestling sessions, 3 striking classes, 1 MMA and 1 BJJ class. I think it’s important for them to train in a variety of martial arts so that they will always be able to defend themselves appropriately in case they ever find themselves in a situation that requires self defense. I believe Martial Arts is so important for young kids to learn, especially in regards to building their self-esteem and confidence. We have one child in particular that was extremely shy and nervous when he first joined our club, but four years later the difference in his levels of confidence and self-worth is amazing, he’s like a different child!” Danni works in physiotherapy at St Michaels House so she also runs an awesome class called ‘Ability’ which caters for children with special needs or limited physical capabilities. We also segregate our adult classes based on their abilities and goals so we have a beginners no contact class, an intermediate class and a class specifically for our competitive fighters. Currently we have 2 Irish K1 Champions and 1 Muay Thai Champion and we’re really looking forward to achieving many more titles soon. In the coming years we plan to grow and progress our training programmes a lot more. We have extremely loyal and dedicated members and have a very successful retention rate among our members so we’ll be looking to keep that up and provide them with all of the resources and opportunities that we possibly can.”

Although Alan has competed in 20 Muay Thai and kickboxing fights, trains in the professional striking classes at SBGI and has trained in Brazilian Jiu Jitsu at SBG Tullamore, he has no intentions of competing in MMA anytime soon stating “My focus now is on my students and being the best coach I can possibly be for them. Fighting has been one of the most exciting and fulfilling aspects of my life, but my days of competing are behind me, now I’m looking forward to growing the gym and helping my members reach their goals and potential.” When asked what advice he would give to a person about to begin their journey into martial arts Alan said “Make sure you find a good gym that you can enjoy spending time at. Don’t approach combat sports with an ego – it will only prevent you from learning and growing. Be open minded and try out a few different styles and always keep chasing progression.”

Speaking of MMA’s struggle to gain national and olympic recognition Alan stated “I also train at Olympic boxing club in Mullingar, they are the number 1 amateur boxing gym in Ireland this year with 15 Irish champions and I can see that the support and financial assistance the sport gets from the government is a huge benefit to the athletes and coaches. It’s not fair that MMA is forced to finance itself, MMA fighters deserve the very same respect and support as any other sport and I believe it is only a matter of time before we become successful in receiving that recognition.”

The Irish Mixed Martial Arts Association would like to extend our sincerest gratitude to Alan, Danni and their members at Relentless Martial Arts for their continued support. We look forward to seeing their members compete on the Irish MMA circuit and wish them the best of luck as they continue to grow their business and contribute to the success of Irish MMA as a whole.