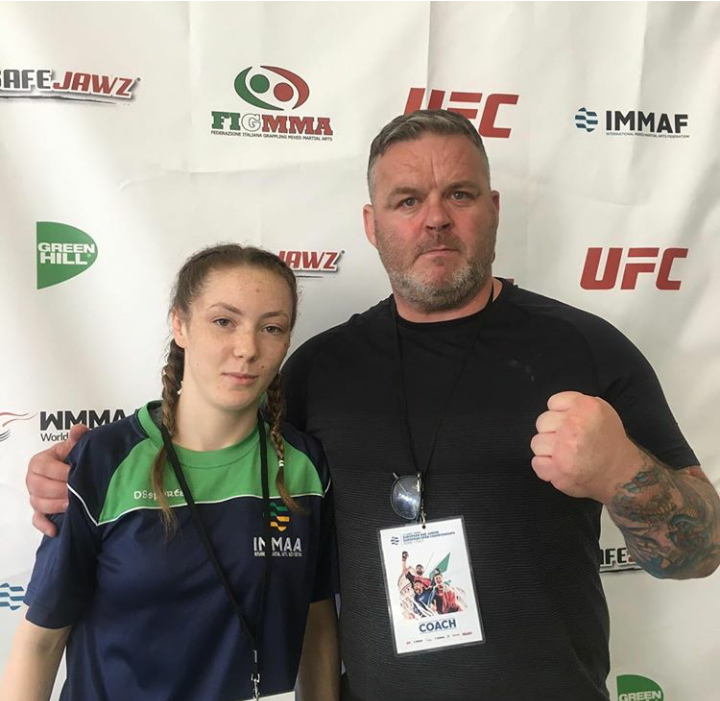 Nadines journey into MMA began at age 15 when her older brother Jamie joined Team Ryano Donaghmede, she began to notice the benefits he was experiencing as a result of his training and decided that she wanted to try it out. Although she had never been involved in martial arts before she had always maintained an active lifestyle and enjoyed competitive sports such as football. She recalls “I always loved sports but had never found anything that I was passionate enough about to stick at long term. When I told Jamie I wanted to try MMA for the first time he told me I wasn’t allowed to train in Team Ryano Donaghmede where he trains so I’d have to find another gym. He was allergic to the thought of his little sister tagging along but he did come agree to come with me to my first day training at Team Ryano HQ.”

Like many others Nadine had a misguided perception of MMA gyms and fighters before attending a class for the first time. “It wasn’t what I expected an MMA gym to be like at all. Everyone was so welcoming and friendly, and not aggressive or intimidating at all. I loved every aspect of MMA but especially loved Jiu Jitsu.” Hooked from the start Nadine began training 6 days per week, eager to improve her skills and abilities at every opportunity, and although Jamie finally agreed to allow Nadine train at Team Ryano Donaghmede the sibling rivalry continued to surge between the pair. “Even though Jamie had a few months of a head start on me in his training, it wasn’t long before I caught up with him and was managing to submit him fairly regularly. Our natural competitive natures meant we were constantly in a struggle to surpass the other one but it worked really well for us because it made us work harder and push ourselves more.”

Eager to test herself against other opponents Nadine wasted no time in entering the Jiu Jitsu competition scene only a short few months after beginning her training. Her many achievements within jiu jitsu include earning two gold medals in the Junior BJJ World Championships in Birmingham, a gold medal at the IBJJF Dublin Open and a silver medal at the IBJJF Senior European Championships. At only 46kg she found it extremely difficult to find other females to compete against within her weight division and so she regularly chose to compete within the male divisions. She recalls “I wasn’t sure at first if it was a good idea but Andy’s reaction reassured me that I was capable of holding my own. Any time I would have doubts against competing in the male divisions he would just say “So what if he’s a man. I know you can beat him because I’ve seen you do it to enough men at the gym, this is no different.” That’s one of the things I love most about training under Andy, he never treats the women in his gym any different to the men. He doesn’t ease up on me just because I’m a woman, he sees the potential in everyone and pushes us all to be the best we can be. I consider myself very lucky to have him as my coach.”

In 2018 Jamie secured a Gold medal at the IMMAF European MMA championships in Romania and in the spirit of sibling rivalry Nadine set out to prove that she could do anything her brother could. After being selected to represent Ireland at the 2019 European IMMAF Championships she attempted to enter the Junior Atomweight division but upon learning that there were no other competitors registered to compete within the division she chose to move to the senior age bracket. Transitioning to the senior division meant that Nadine would have to wait longer to fight as the junior fights take place first in the tournament and Nadine was scheduled to be the last Team Ireland representative to fight. As all of her previous attempts to compete in MMA within Ireland had been thwarted due to the lack of amateur female atomweight fighters in the country Nadine showcased her abilities in her debut fight at the IMMAF European Championships in Rome where she defeated the former European Gold medalist via split decision from the judges before earning a silver medal for Team Ireland in the finals. When asked if she feels nervous or stressed in the lead up to fights Nadine answered “I never let the pressure of a fight get to me. All I ever feel before a fight is pure excitement, I can’t wait to get out and showcase my skills. The result doesn’t matter to me as much as performing my best and doing my team and coaches proud.”

Going on to compete at the IMMAF World Championships in Bahrain in November of 2019 where she earned another silver medal for Team Ireland Nadine considers her experiences at the IMMAF Championships to be some of her greatest achievements. She claims “The competitors you meet at the IMMAF’s are on a whole new level. It’s amazing to watch the different styles each country’s fighters have and test your abilities against people with different backgrounds.”

Speaking of her future plans within the sport Nadine says that she plans to return to the IMMAF Championships to earn a gold medal and hopes to gain as much experience within the amateur leagues before transitioning to the professional ranks in the long term. When asked who her role models are within the sport she replied “Aisling Daly definitely because she really paved the way for women in MMA, and she was Ireland’s first MMA Champion. Catherine Costigan, she’s an atomweight like me and I really admire her work ethic. And Leah McCourt because she’s really one of the most active female fighters in the country at the moment and is managing to make a pretty big name for herself.”

Nadine was quick to point out all of the help, guidance and support she has received from her Team Ryano coaches and training partners since she joined the gym. “Andy is a truly incredible coach, he’s always there for us and his opinion means alot because he’ll never beat around the bush. He’s honest and tells it like it is so when he gives you praise you know he means it. Everyone at both Team Ryano HQ and Donaghmede have been amazing coaches and training partners but Keith McCabe, Stewy Cawley, Mikey O’ Reilly and Hughie O’ Rourke especially have really put the time in to help me up my game and become the best fighter I can be. I’ve been really lucky to have my brother to train with too, especially during lockdown we were able to hit pads, roll and spar together almost every day.”

Nadine believes that participating in MMA has provided her with a wide range of benefits including increased self confidence, improved fitness levels, a healthier lifestyle and close relationships with many amazing people she has met through the sport. “There are no downsides to training in MMA, it makes you both mentally and physically stronger and is a great escape from day to day life.” When asked what advice she would give to somebody thinking of joining MMA she stated “Just make sure you enjoy it and don’t put too much pressure on yourself. Once you enjoy what you’re doing you’ll keep coming back and the improvements will come naturally in time. Try to compete as much as you can, that’s where you’ll learn where your strengths and weaknesses lie and what you need to be working on improving.”

The Irish Mixed Martial Arts Association are extremely proud of Nadine’s contributions to Irish MMA and her achievements as a representative of Team Ireland. We look forward to continuing to support her and follow her journey as she works towards achieving her goals of becoming an IMMAF gold medalist and progressing to the professional ranks.