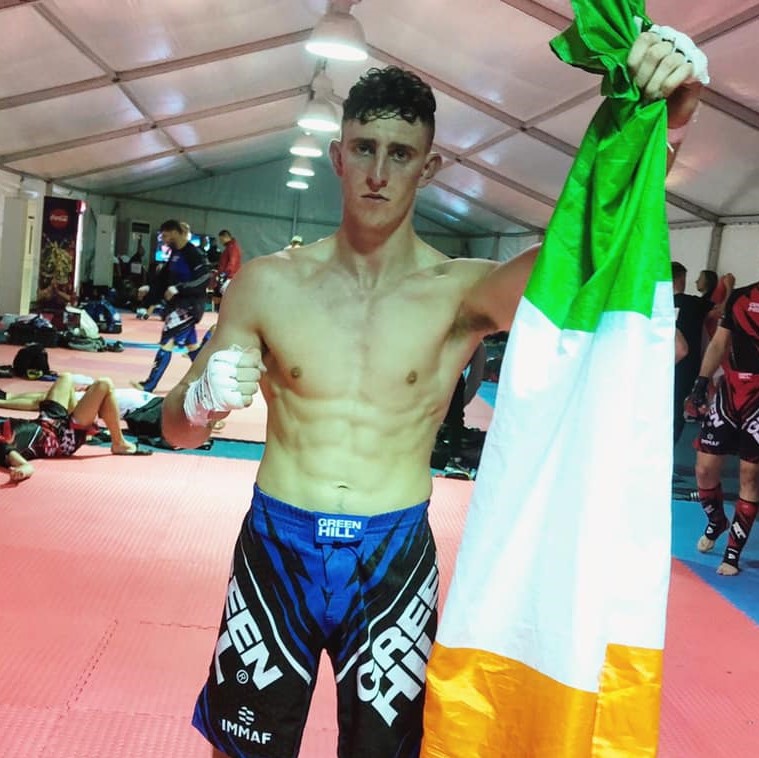 This week’s featured fighter of the week is two time Team Ireland representative at the IMMAF Championships Eoin Sheridan of SBG HQ under Head Coach and IMMAA President John Kavanagh.

Eoins introduction to martial arts began at age 5 when his father enrolled him and his brother in their local karate club in Perrystown where he trained for 7 years in a mixture of both karate and kickboxing style classes and competed at various competitions and tournaments earning multiple medals and trophies before gradually ceasing training in his teen years. Recalling his early years training in karate and kickboxing Eoin believes “The distance control, timing and flexibility I learned from traditional martial arts has benefitted my fighting style and abilities greatly. By age 12 I had transitioned to train in the adults classes so that really grew my confidence in my abilities a lot and I learned the importance of technique over size at a young age.”

At age 19 Eoins friends who had begun training in MMA persuaded Eoin to try out a class with them at the then new SBG HQ on the Naas Road. Relishing the chance to train in combat sports regularly again Eoin committed himself to training 5-6 days per week. His experience in striking enabled him to hold his own in the stand up aspect of the sport, he  went on to earn the title of ISKA 78kg Irish champion in November of 2017 and was also awarded the SBG HQ ‘striker of the year’ award for 2017. He competed at combat promotions such as Evolution and Capitol One earning himself an undefeated record in K1 and his proficiency in striking soon earned him a place in the elite athletes training classes at the gym where he regularly trained with professional and highly experienced mixed martial artists. Eoin soon learned that he would need to work on his grappling in order to succeed in MMA, he began to focus his efforts on his wrestling and BJJ skills and was awarded his blue belt in Brazilian Jiu Jitsu in early 2019.

Eager to make his long awaited MMA debut Eoin regularly sought out fights on national amateur MMA promotions but to no avail as he found it difficult to attain match ups and several attempts ended with his opponents pulling out just before the event. After his coach suggested trying out for the international team Eoin attended the Team Ireland Squad sessions and was selected to represent Ireland at the 2019 IMMAF European MMA Championships in Rome. Unfortunately he was beaten by decision in the preliminary fight by a Russian athlete who went on to win the gold medal. Feeling deflated from his defeat he sought advice from the team Ireland coaches who reassured him that he had displayed a solid performance and should consider attending the World championships later that year. Upon returning to Ireland Eoin competed at NAGA where he was awarded a silver medal before travelling to Bahrain in November to enter the IMMAF World Championships where he was victorious in his first bout against Team Poland but was defeated by a Russian fighter in his second fight of the tournament. Speaking of his experiences attending the IMMAF Championships Eoin stated “Although it was frustrating not being able to earn a medal for my country it was a great experience and I was able to learn alot from each fight. All of my fights at the IMMAF’s have gone the distance and I have never had an easy fight but luckily I took no significant damage. It’s incredible to experience the extremely high level of skills and different styles each country brings to the table, it’s one of those things you need to witness to be able to appreciate fully. The work that goes on behind the scenes is crazy and I don’t think people really understand the amount of work that goes into preparing the international team for these competitions so I’d like to give thanks to Liam-Og, Deano and Andy for everything they’ve done for me and for the team.”

When asked if he experiences feelings of nervousness before a fight Eoin claimed “Nerves are always going to have a part to play when you’re competing in any sport, they’re not necessarily a bad thing, it’s just a matter of mentally preparing yourself. Any nerves I feel usually subside once I get to the event, then the adrenaline kicks in and I’m absolutely buzzing to get out there and put my skills to the test.”

Eoin went straight back to his extensive training regime at the gym after returning home from the World championships and was thrilled to learn that he had been selected as a training partner for Conor Mcgregor in the lead up to his fight against Donald Cerrone in January 2020 which enabled him to travel to Las Vegas in an all expenses paid trip. Eoin stated “I was very grateful to be chosen for such an exclusive opportunity. Conor is my favourite fighter of all time and I’m very lucky to be able to experience his work ethic and drive first hand. I get my inspiration in the sport from the people I train with in the gym, Kiefer Crosby and James Gallagher would be two people who motivate me a lot by seeing their continuous ongoing achievements and being fortunate enough to train alongside them. Of course none of us could be where we are now without John and all the time and work he’s put into helping us improve and develop as athletes. He’s an amazing coach who’s unbelievably technical, he really knows what he’s talking about and is always happy to help out in any way he can.”

When asked about his plans for the future Eoin stated “I definitely want to attend at least one more IMMAF championship before I turn pro. I had planned to go to the Pan American Open Championships in Mexico in May but unfortunately the pandemic put a stop to those plans. I’m looking forward to transitioning to the Professional ranks because I feel the rules suit me better stylistically. I love to use my elbows so at the moment I’m unable to utilise my best weapon. I’ll be looking to move into the professional ranks soon and aim to fight in one of the top organisations and compete at the highest level in time.”

Eoin believes that taking up mixed martial arts has had a positive effect on his life in many ways claiming “It has kept me on the straight and narrow, made me disciplined and willing to put in the hard work. Of corse I’ve had to make some sacrifices along the way but it’s all worth it when you’re doing something you love and are passionate about. I think the best advice I would give to someone about to start MMA is to enjoy your training, listen to your coaches, keep showing up and putting in the work and never underestimate the importance of repetition.”

The Irish Mixed Martial Arts association are extremely proud of Eoins performances as a representative of Team Ireland and look forward to watching his career progress in the coming years.