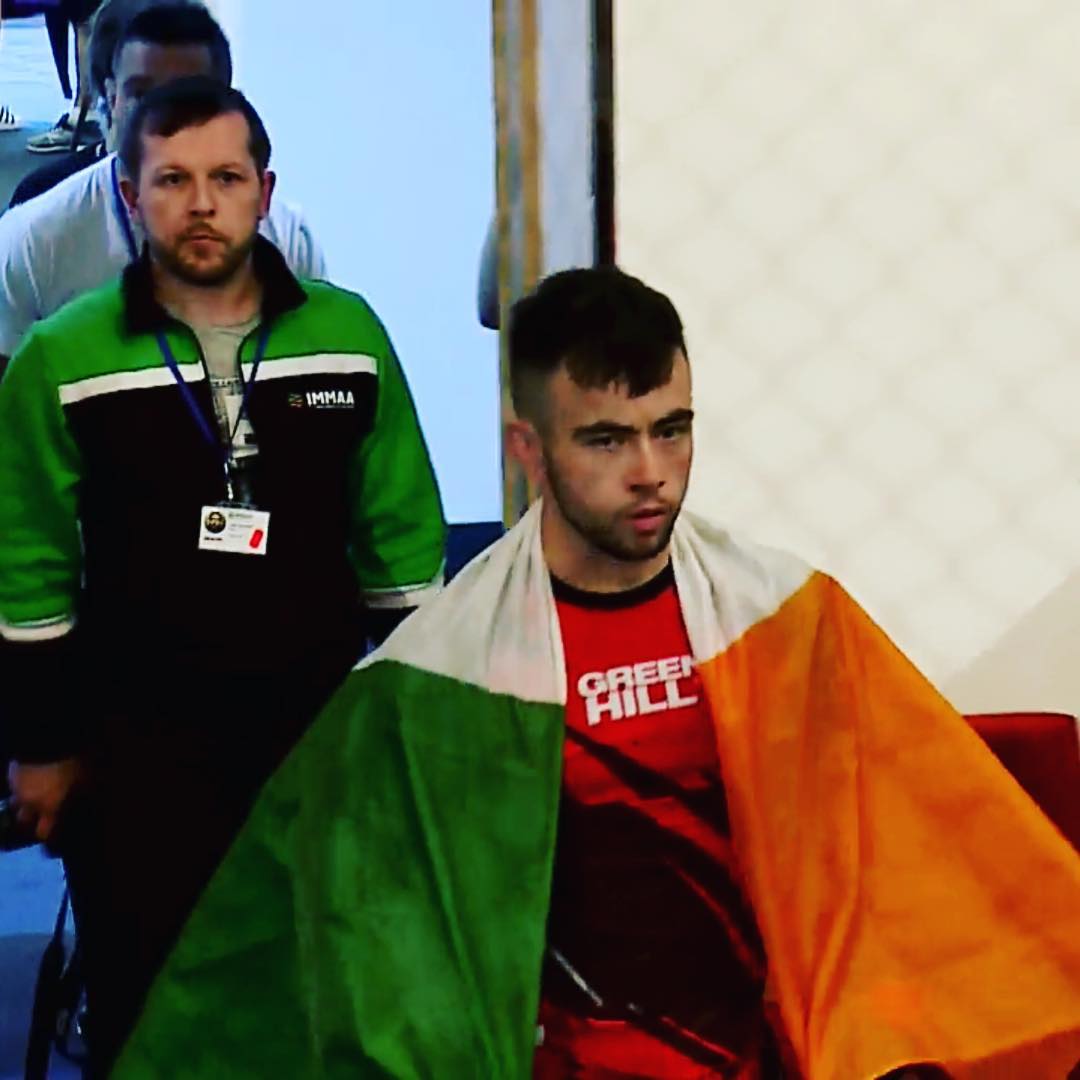 Dylan was introduced to combat sports from an early age as his parents, grandfathers and many other members of his family were keen boxing enthusiasts who had won various titles within the sport and represented Ireland at international level. Dylan began training in boxing from age ten to sixteen at Father Horgans boxing club, when he chose to temporarily pause his training to focus his time and efforts on soccer instead, before returning to boxing at age 18. Speaking of his transition to MMA Dylan recalled “When I was 20 a friend of mine was training in MMA at K2C (now SBG Cork City) and asked me to come down to spar with him one weekend. I joined in with the sparring class and was doing well on my feet but as soon as I was taken down I didn’t know what to do. I joined K2C and started to learn the fundamentals of wrestling and jiu jitsu but felt more comfortable in the striking aspect of the sport. After a few months of training I had my first MMA fight at a local gym against an experienced Thai boxer. I won the fight by knockout in the third round and I’ve been hooked on the sport ever since. I much preferred using MMA gloves over boxing gloves because they’re less padded and make the impact of your punches more effective so it suited my style better. My next  fight was at the Cork MMA expo at Neptune stadium in 2016. I was dominating the fight standing but after he took me down I was pretty much defenseless against his grappling skills. After that my coach Liam sat me down and made me realise that I would need to really focus on wrestling and jiu jitsu instead of relying on boxing if I wanted to keep competing in MMA. It took a lot of persuading but I eventually realised that he was right, I took his advice and spent as much time on the mats as I could. The following year I fought at the 02 in Leeds on short notice against a high level grappler, but the work I had put into improving my grappling paid off when I submitted him with a rear naked choke in the second round.”

In 2018 Dylan was selected to represent Ireland at the 2018 IMMAF European MMA championships in Romania which he describes as the highlight of his MMA career to date claiming “It wasn’t an easy process to get on the team. You have to go to squad sessions with every fighter in the country who’s trying to make it onto the team and only two fighters from each weight division can make it so you have to work hard to prove that you’re the best choice to represent your country. It’s a lot of pressure but it’s good pressure, it motivates you to be the best you can be. The IMMAF championships are the biggest platform for amateur MMA in the world, it’s our Olympics. It’s the perfect opportunity to put your skills to the test and gain a lot of experience. The thing I enjoyed most about the whole experience was being surrounded by like-minded, determined people who have similar goals, aspirations and a genuine love and passion for the sport. The IMMAF’s have every type of fighter from all different backgrounds and disciplines so you can never predict what you’ll be faced with. Having the discipline it takes to maintain your fighting weight each day and preparing yourself to be able to fight multiple days in a row can be a challenge but it’s all part of the journey of becoming a better fighter. Even though I didn’t make it very far through the tournament it was a great experience and I would encourage every fighter to make sure they compete at the IMMAFs at least once in their amateur career.”

Speaking of the obstacles he has faced within the sport Dylan revealed “I have always struggled with cutting weight for fights. Training is the easy part but no matter what I tried those last few pounds of a weight cut are always difficult to lose. Thankfully I’ve always managed to get the job done and make weight just in time but it was never an easy feat.”

When asked about which athletes he looks to for motivation within combat sports Dylan answered “I wouldn’t say I look at any one fighter I aspire to be like in particular but I admire different parts of each fighter’s style. This sport is so diverse I think there’s something to be learned from everyone although I’ve taken a lot of inspiration from Lomachenko’s boxing style and it’s something I’ve tried to incorporate into my own striking.”

Expressing his gratitude for those who have helped and guided him throughout his MMA journey Dylan stated “I owe a huge thanks to my head coach Liam. He’s a great coach who does everything he can for his students, including dealing with my complaints during a weight cut and answering all the stupid questions I come up with. Our gym momma Marlene is the greatest supporter you could ask for, always waiting to welcome me into the gym with a big smile and is well able to put me back into my place when needs be. A big thank you to all of my training partners at SBG Cork City too for always pushing me to improve and do better than before. I’ve noticed a big change from all of the fighters in our gym this year. Through everything that’s been happening with Covid-19 I think it’s made us all become more driven and committed than ever before. I’m very grateful to all of the sponsors who have helped me over the years and my boxing coach John Morrissey for taking my striking to the next level.”

When questioned about what advice he would give to somebody who is about to begin their MMA journey Dylan responded “Don’t overthink things, just put in the hours on the mats, trust your coaches and ask plenty of questions. When I was starting out I was afraid to ask questions but now I always make sure to ask whatever questions come into my head. If you never ask then you’ll never know the answers and it shows your coach that you’re interested and thinking about things from different angles. Don’t be afraid to try new things and make sure to enjoy the process.”

Revealing his plans for the future Dylan claimed “In the next year or so I’ll be aiming to earn my purple belt in jiu jitsu, I want to have a few more high level amateur fights and go back to the IMMAF’s before turning professional. The goal is to keep challenging myself and I think the smaller gloves and longer rounds at professional level will suit my style well. I want to go as far as I possibly can in this game and give back to all the people who have supported me along the way.”

Due to the current global health crisis many athletes are struggling to keep their fitness levels up but Dylan insists this hasn’t been an issue for him claiming “Because I’m in the army I’ve been keeping my fitness up through our training drills and exercises and have had access to training equipment throughout the lockdowns. I do a lot of extra cardio training and solo drilling techniques as well. Lockdown can wreak havoc on your routine so I’ve made sure to keep setting new mental and physical challenges for myself to keep me motivated and in shape. In October I climbed Ireland’s highest mountain Carrauntoohill while carrying a 100lb rucksack on my back and managed to raise over €2,000 in aid of a little boy named Warren who has been diagnosed with Hurler syndrome. I also ran full and half marathons while carrying weights ranging from 10-20kg. I’m currently in the best physical shape of my life. I could have chosen to take the easy route and relaxed my training during lockdown but when you want something enough then you’ll choose to put the work in and make it happen rather than make excuses.”

The Irish Mixed Martial Arts Association would like to thank Dylan for his commitment to the sport and wish him and his teammates at SBG Cork City the very best of luck and skill as they continue to build their careers and contribute towards the success of Irish MMA.