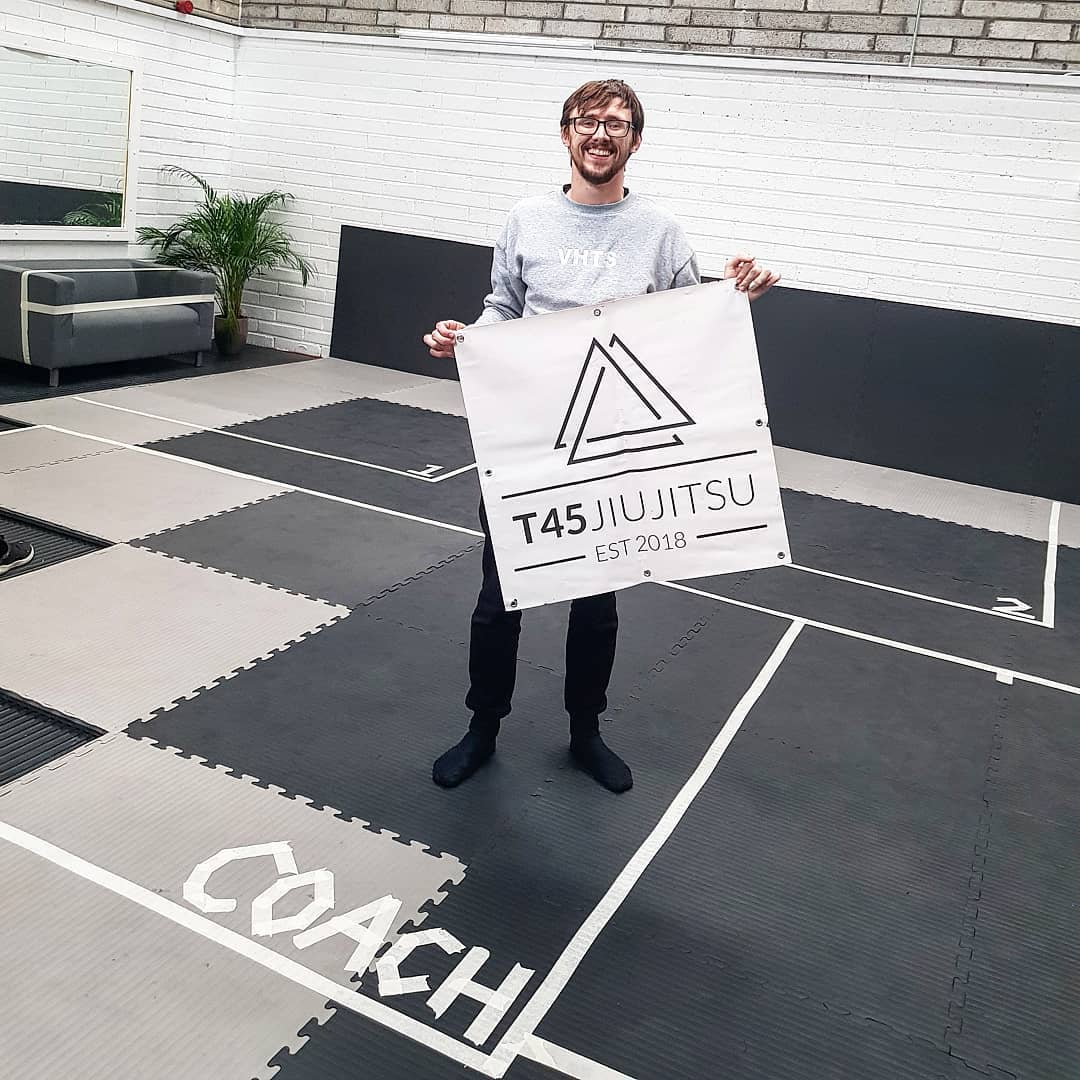 Ciaran’s introduction to martial arts began when he joined the CIT MMA club while studying for a degree in multimedia. While he initially joined for self defence purposes, he soon found himself falling in love with the sport and sought out a club outside of college to further his training. He began participating in three classes per week at the MMA Clinic in Cork where he discovered that his true passion was in the sport of Brazilain Jiu Jitsu. He recalls “I enjoyed the mental challenge Jiu Jitsu gave me and it appealed to me as a more methodical approach to fighting with endless techniques, scenarios and possibilities.”

After competing in a few novice MMA bouts Ciaran was matched for his first fight on an amateur show but broke a rib during training in the lead up to the event forcing him to withdraw from the fight. After recovering from his injury he made the decision to cease competing in MMA and focus instead on progressing his Brazilian Jiu Jitsu skills. Upon graduating from college and securing full time employment Ciaran settled into his new routine of finishing work at 5pm and rushing to the gym where he would train for 2-3 hours each evening. Eager to test his abilities against other opponents he competed in both Gi and Nogi competitions at each available opportunity.

Ciarans dedication to the sport was recognised and he was awarded his BJJ brown belt in 2018. Deciding to pass on his knowledge to the next generation of competitors he chose to begin coaching Jiu Jitsu classes at a nearby fitness gym which attracted the interest of many locals looking for a new and interesting method to get fit. The classes took off straight away with numbers growing steadily and within 6 months he had developed a strong team of 15 members who were attending regular training sessions. The club soon outgrew the space available at the gym and Ciaran made the decision to lease a unit for the club. This change of premises proved to be a great choice for T45 Jiu Jitsu as membership numbers soon doubled and continued to grow.

Throughout his many years of competing at Jiu Jitsu tournaments Ciaran had accumulated a vast network of close friends within the sport from various clubs and affiliations around the country. On numerous occasions he was invited to attend Team Ryano HQ in Dublin owned and operated by Head Coach and IMMAA Vice-President Andy Ryan. Ciaran recalls “I loved the atmosphere at Team Ryano, any time I visited I was blown away by the high level of their technical skills. I was always made to feel very welcome there and never treated as an outsider. The thought to affiliate with Team Ryano hadn’t occurred to me until I watched Andy’s appearance on The No Shame Podcast. When I heard him mention his affiliated gyms I decided to pursue affiliating T45 Jiu Jitsu with Team Ryano and  I can honestly say it was a decision I have never regretted for one moment. Andy is a great leader, he gives me complete freedom to run my gym in my own way and is always on hand to give guidance and support when needed.”

When questioned about his greatest achievements within the sport Ciaran stated “As a competitor I would have to say it was at Grapplefest in Liverpool last year. I was warming up for my match backstage when I looked up and saw Brazilian Jiu Jitsu and MMA superstar Masakazu Imanari warming up for his match. I was completely starstruck and consider it to be a huge personal achievement to compete on the same card as such a legend. From a coaching perspective I would have to say that my greatest achievement is seeing the progression of my students, not only in the advancement of their abilities and competitive accomplishments but in the improvements they make to their lifestyles and confidence levels. I have one 17 year old student at the moment who has been training with me for 2 years now and even though he is small in size his technical abilities are mind blowing, he can easily tap out people much bigger than him and his determination to improve is inspiring. He is always thinking ahead and asking really educated questions that show me he is thinking of all of the possibilities of each situation. I also have another student who I had initially underestimated when he first joined. This gentleman is of the older generation and was quite overweight at the time when he joined, I wasn’t too sure if he would be able to stick out the training long term but I am very proud to say that he has proved me wrong and thoroughly exceeded all of my expectations for him. He is now nearly two years into his training, has lost a considerable amount of weight and absolutely terrorizes his fellow students with his extensive competency of worm guard.”

Discussing the biggest obstacle he has faced throughout his martial arts journey Ciaran revealed that he sometimes struggles to educate people about what Brazilian Jiu Jitsu really is, and believes that some common misconceptions about the sport include equating it to more traditional martial arts such as TaeKwonDo or considering it to be a violent and brutal sport. He explained “Generally people understand combat sports such as boxing but when you mention Jiu Jitsu they often struggle to grasp the concept of the sport. Even my own parents referred to it as TaeKwonDo for the first few years of my training, and my younger sister agreed to tag along to a class not having a clue about what the sport was but even she has now come full circle to understand and grow to love the sport.”

Following the Covid-19 pandemic Ciaran made the decision to move the club from it’s unit in Carrigtohill to a new, more suitable premises in Midleton. They currently offer a selection of classes including a foundations course, advanced classes in both Gi and Nogi, Womens only classes, solo drilling classes and more recently Yoga for BJJ classes which improves flexibility, aids recovery and has proven to be very popular among the members of  T45. Ciaran stated “We are very proud of the training programmes we have developed. The foundations course runs on a 12-16 week recurring cycle ensuring the fundamentals are well ingrained before progressing to the advanced classes where we focus specifically on aiming to improve our abilities at one guard per month. I prefer to focus on teaching the concepts of the sport and encouraging my students to try out new positions and ideas rather than relying on the more commonly used techniques.”

Speaking of his plans for the future Ciaran stated that each year he writes down his goals in relation to competing. In 2020 his plan was to compete at the European Gi and NoGi championships and while he was successful in attending the Gi championships in January, the global Covid-19 pandemic put a halt on his plans to compete at the Nogi championships. While he hopes to get the opportunity to complete at least once more before the year is over his priorities are focused primarily on his gym and students. He also intends to introduce children’s classes to the timetable in September.

Describing the importance of affiliating T45 Jiu Jitsu to the Irish Mixed Martial Arts Association Ciaran stated “Currently there is no national governing body for BJJ or the more non traditional martial arts. IMMAA has provided MMA and BJJ clubs with a voice, a clear pathway for athletes to progress and works to improve the public’s perception and understanding of the sports. The association and committee members have provided our club with guidance, help and support along the way and has created a positive, supportive community for members to effectively communicate and network within.”

The Irish Mixed Martial Arts Association are very proud to represent T45 Jiu Jitsu and would like to extend our sincerest gratitude to Ciaran and his students for their ongoing support. We wish them the very best of luck and skills as they continue to grow their club and make their mark on the BJJ competition scene.