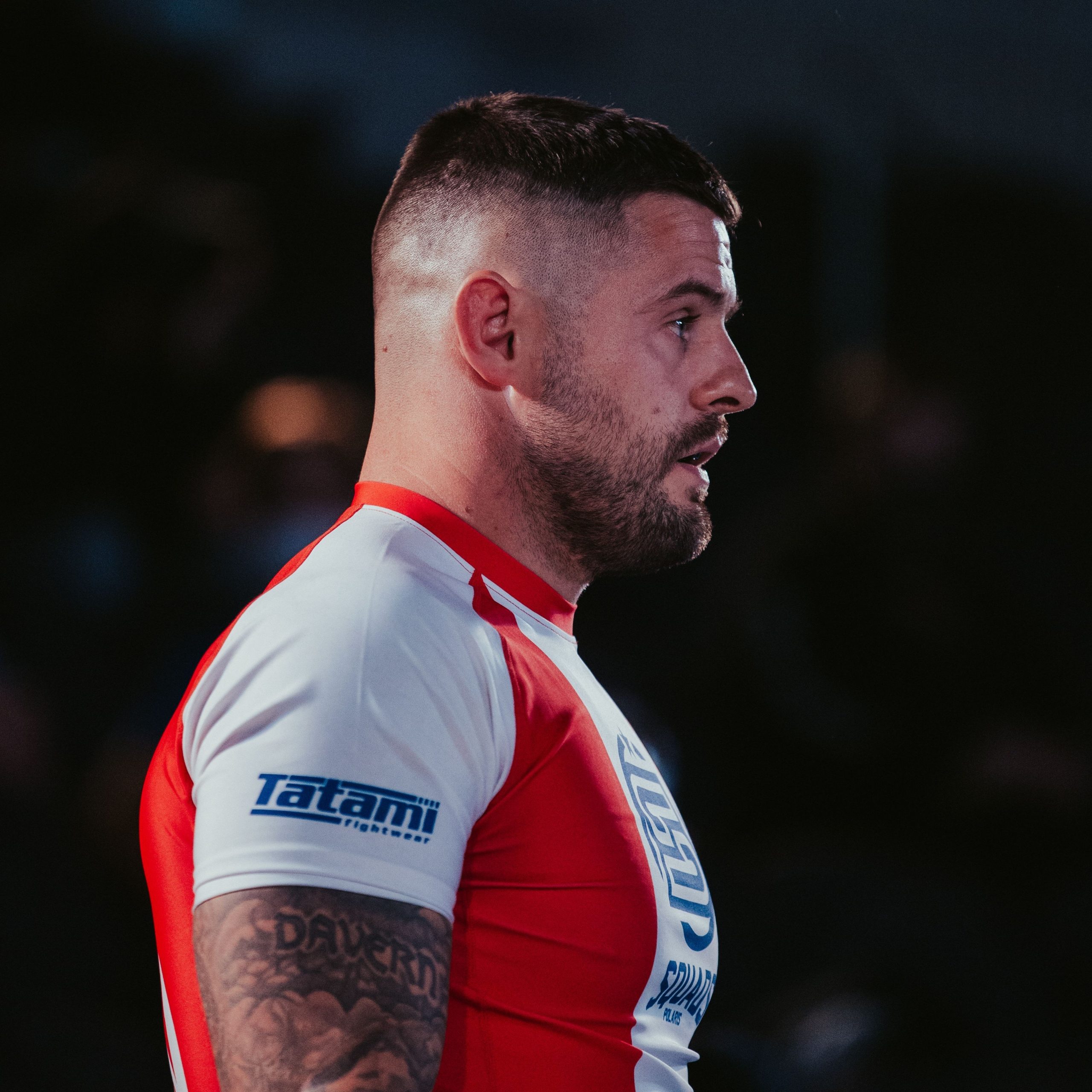 Kierans’ father first introduced him to martial arts at the age of 7. Living in central city flats in London at the time he started to attend karate classes at a nearby dojo. At age nine he and his brother took up boxing classes under coach Clint McKenzie, the brother of former professional boxing champion Duke McKenzie before moving to Ireland at age 12 when he began to drift away from combat sports training. Instead he found an interest in other sports such as soccer and athletics, although he continued to do some padwork in the garden with his father and always held a keen interest in watching fights on television before making the decision to return to martial arts in his late teens. Reminiscing on his return to combat sports Kieran stated “I got back into boxing for a year or two in Brosna boxing club in Westmeath. Then I found kickboxing and MMA in Portlaoise at Tuatha DeDannann, run by Brazilian jiu jitsu brown belt John Ging. It was there that I met Charlie Ward, Kieran O’ Donnell and a few others that I came up on the scene with over the years.”

Speaking of the progression of his fighting career Kieran claimed “I started off coming up through the MMA leagues and a few kickboxing fights here and there. I fought at the Irish open kickboxing championships in Citywest hotel and started fighting on shows like Cage Contenders back around 2009. One of my training partners Rob ‘The Gob’ Quinn was someone I really looked upto at the time. I remember watching him win two MMA fights in one night and just thinking ‘That’s what I want to do’. John Ging was training under John Kavanagh at the time so when I made the decision to start training full time, moving to SBG was the obvious choice, and I’ve never looked back.”

Going on to discuss the decision to open SBG Tullamore Kieran said “After school I was working in an apprenticeship as a bricklayer. It wasn’t what I wanted to do and I wasn’t interested in it at all, it was just something to pay the bills with. When I got laid off during the last recession I was totally focused on my MMA and jiu jitsu training. I was drawing the dole at the time and I needed to find a way of paying my gym fees. As difficult as it was to walk away from a so-called safe career choice I went to the enterprise board to look into getting some sort of a grant to start up a small club. They gave me a start up grant of €1,500 and on August 4th 2012 I started my own little club, just above the boxing club in Tullamore. At first my only reason for opening the club was to cover my fees in SBG Dublin and the basics like food and rent. I never really planned on making a living off of it but then I realised that this was my chance to train full time in MMA and BJJ and then I worked on building it up to what it is today.”

When asked about what he considers to be the greatest highlight of his career to date Kieran answered “There are a few highlights that spring to mind from different perspectives. As a gym owner I’m very proud of the team we’ve built here at SBG Tullamore, we have some great prospects coming up in BJJ and MMA and some really great coaches who have progressed through the ranks here with us. As an athlete I think my biggest achievement was earning my blackbelt in Brazilian jiu jitsu in 2018. That was something I had been working towards for a very long time and it was a huge moment for me. Obviously we all start out as white belts and to make the progression all the way to black, especially a black belt from John Kavangh is something I’m very proud of.”

Discussing the obstacles he has faced throughout his career Kieran stated “I try to use the jiu jitsu approach when I come up against any obstacle. Just like in jiu jitsu you don’t want to throw in the towel at the first attack that comes your way, you need to think how can I defend or move around it. I try to use that thought process in life too and it’s worked well for me so far. One of the biggest problems I came up against was trying to find the right balance between being an athlete and a coach. They’re very time consuming roles and you’re constantly trying to keep on top of training, nutrition, making training plans, making sure your students are okay, getting enough rest and recovery time and the day to day running of the gym on top of it all. Thankfully I’ve found a great solution to that in the high level coaches we have in our gym. They’ve really helped to take the pressure off in the last few years, allowing me to allocate enough time for my own training on top of my coaching.”

In 2018 Kieran joined the Team Ireland coaching squad to support the Irish international MMA team at the IMMAF European MMA championships in Romania, describing this experience he claimed “I think going to the IMMAFs was my favourite experience as an MMA coach. I really enjoyed it and was very impressed at how professionally everything was run. It’s the closest thing we have to the Olympics for MMA. I had a great time and learned alot from coaching alongside the likes of Andy Ryan, Deano Wade and Liam-Og Griffin and we had Deborah O’ Sullivan and Joe Clifford taking over the cutsman side of things. It bonded us all together as one Team Ireland, not as individual clubs, just one united team working together to represent our country and I loved that. I had one of my own fighters Adrian Elbert, who stepped up to fight at middleweight at short notice and did really well. I also got the opportunity to corner and work with lots of fighters from other gyms like Ciaran Clarke, Cathal Manning and the guys from SBG Cork and MMA Cork and we all built strong friendships through that experience. Overall I really enjoyed it and will definitely be hoping to get the opportunity to go to more IMMAF events in the future once this pandemic passes.”

When questioned about who he looks to for inspiration within the sport Kieran replied “I take inspiration from everyone really, from young to old, athletes to coaches. From a coaching point of view obviously John Kavanagh had a huge impact on my coaching style but I also learned from watching other coaches like John Danaher, Trevor Wittman and Andy Ryan. As an athlete I take inspiration from the likes of Marcelo Garcia in jiu jitsu and Khabib and Georges St-Pierre in MMA. Each fighter is so unique I think there’s something to be learned from everyone.”

Speaking of the advice he would give to anyone hoping to improve their game, technique & get the most out of each training session Kieran stated “I think the best advice I could give anyone is to prepare to be in it for the long haul. Don’t expect to see big results overnight, it takes time. It can take years to feel comfortable with some of the movements. You have to be patient and trust the process. Every time you come to class have the mindset that you’re aiming to improve and get better. It’s a lot easier said than done. Try going to training with a specific plan in mind and focus on working on that. Sometimes it will work out the way you want it to and sometimes it won’t, and that’s okay. Write down what you did, what went wrong and what went well. Having that record of your training will help you to take ownership of your mistakes and address the problems at hand. Above all else time on the mat is everything. You can put the best plans in place, you can watch all the tutorial videos but it all comes down to time spent on the mats.”

Although Kieran has accumulated an impressive collection of achievements throughout his journey as an athlete, he insists that his competitive career is far from over, stating “My main goal as an athlete for the moment is to win the European trials and qualify for ADCC. I’d love to win the Polaris middleweight belt. They’re where my focus is set at the moment but in the meantime I’ll take on any superfights or challenges that come my way. I want to test myself as a martial artist and an athlete at every given opportunity. I want to look back on my career one day and know that I left no stone unturned. In the longer term my future lies in coaching. As a coach my goal is to create blackbelts that are better than me and will go on to become world champions in MMA and jiu jitsu.”

As a keen advocate of the Irish Mixed Martial Arts Association Kieran spoke proudly of his reasons for joining and supporting the organisation stating “I think it’s important for us all to come together and be a part of an association that connects us all as gym owners, coaches and athletes. There is great strength in unity. When we all join together we have more power to push the sport forward in the right direction to create a better future for our athletes. The more great minds we have working together will mean better ideas and opportunities in the future. Together we can raise the standards of MMA in Ireland and set the precedent worldwide for other countries to follow.”

The Irish Mixed Martial Arts Association would like to sincerely thank Kieran and all of his coaches and members at SBG Tullamore for their ongoing support as we continue to strive for the progression of Irish MMA. We would like to wish Kieran and his team the very best of luck and skill in their endeavors and we look forward to watching their progression and achievements within the sport in the future.