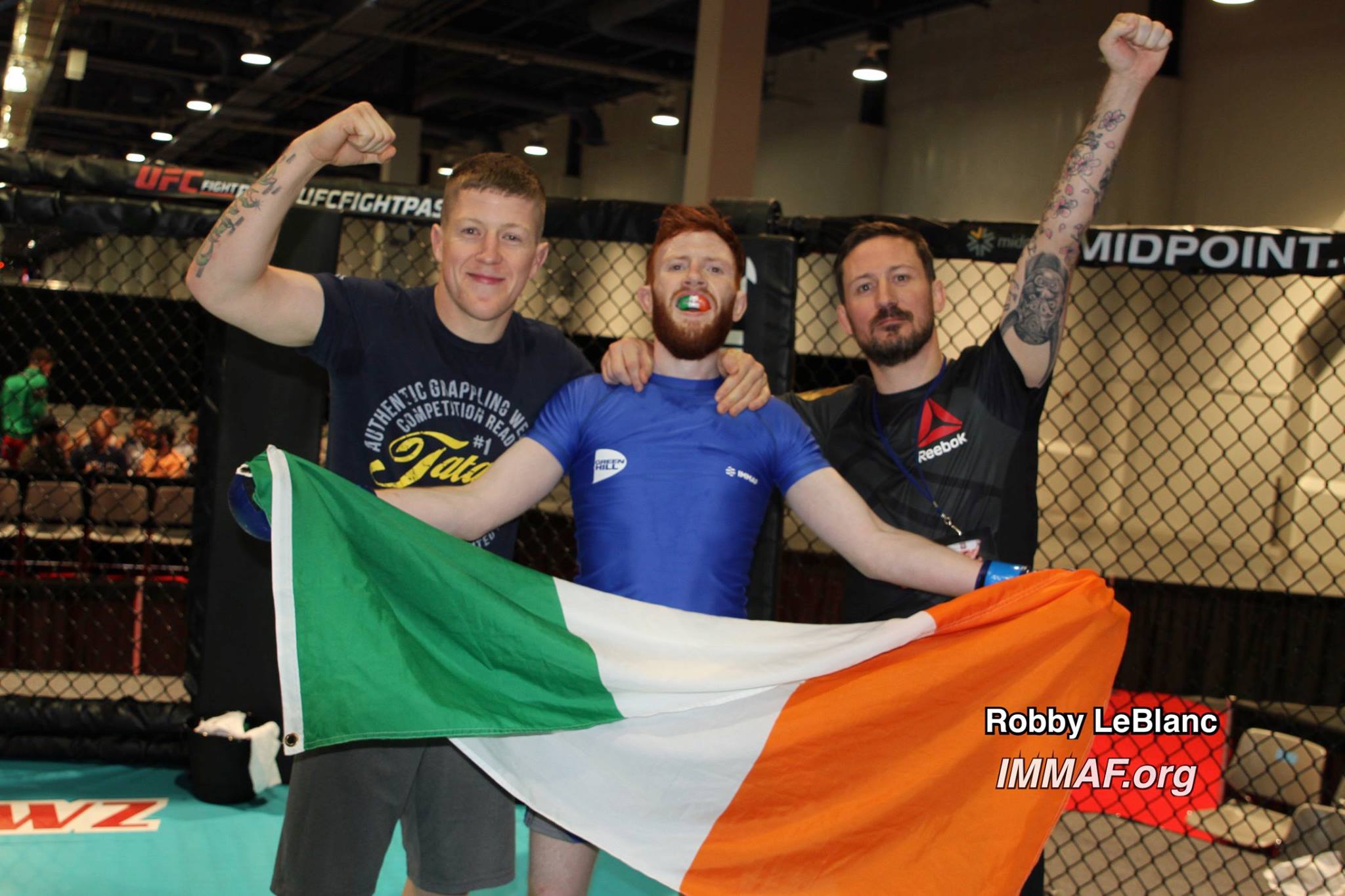 Daves introduction to martial arts began at age 18 when he took up kickboxing, he recalls “I always had an interest in martial arts but didn’t begin to pursue that interest until quite late. At the beginning I was only really doing it to keep fit. I kept it up for about a year, then my mam told me that her friends son had earned his brown belt in jiu jitsu, although she called it ninjitsu. The person she was referring to turned out to be Darragh O Connell of East Coast jiu jitsu academy so I decided to go down there and give it a try. I threw myself head first into the sport and took the opportunity to compete whenever I could. As a whitebelt I won Gold at the European championships and took bronze in the world championships. Around the same time I had come to the decision that I wanted to start taking combat sports more seriously so I googled MMA clubs and SBG Charlestown came up so I began splitting my time between training in jiu jitsu at East Coast and striking at SBG Charlestown. After winning my first three muay thai fights Coach Owen Roddy encouraged me to try MMA, even though I wasn’t sure I was ready at the time. He explained to me about the IMMAF’s and how they use same day weigh ins, which enticed me because I didn’t like the thought of doing a severe weight cut.”

Dave represented Ireland at the IMMAF championships on four separate occasions and made his MMA debut at the 2015 IMMAF European championships in England. After submitting his first opponent via a triangle choke in the second round, he went on to win a bronze medal for team Ireland. In July of 2016 he travelled to Las Vegas to compete at the World championships where he was awarded a silver medal and went on to win a second silver medal later that year at the European championships in the Czech Republic. Unfortunately he was defeated in his preliminary bout via judges decision at the 2017 European championships and also suffered a broken thumb during the fight which required surgery. Speaking of his experiences representing Team Ireland at the IMMAF MMA championships he said “I absolutely loved my time competing at the IMMAF’s. The only thing I can compare it to would be the Olympics – that’s the level of professionalism the tournament offers. It’s a huge benefit to be able to fight multiple times in a tournament format, it really builds up your experience in a short amount of time. It was a real honour to be able to represent my country. When I competed in jiu jitsu it was more focused on individual athletes whereas in the IMMAF’s you go as a whole Irish team representing our country together. It’s something that very few people get the chance to do and something I’m very proud to say that I’ve done.”

Speaking of the highlights of his journey so far he claimed “I would say my biggest highlight would be my fight against Barry Hanna at Bamma 26 because I got to fight in the 3arena. It was a bit surreal because I got to fight there as an amateur, in the place where so many big historic fights took place. There’s  many professional fighters out there who never had the opportunity to fight at the 3 arena so it’s something I take great pride in. The sport has given me some great opportunities over the years and enabled me to travel to lots of different countries and places. It’s hugely beneficial to your mind as well in keeping you focused. Even when I don’t have a fight coming up I’m still in the gym training everyday”

When he’s not training Dave’s work life still centres around MMA. As the owner of Ginger Beard Photography he works in capturing candid shots of top class athletes in action and has landed himself the coveted position of being Irish MMA star Conor McGregor’s personal photographer. He has also worked with celebrities including Drake, Mike Tyson, Skepta, Migo and Post Malone. Discussing his career and how he manages juggling work and training schedules Dave stated “Conor and I first met through mutual friends in MMA, he had seen some of my work and liked it so he asked me to come down to the gym to take some photos of him training and we’ve been working together ever since. Being able to witness his dedication, energy and passion for the sport is inspiring. I consider myself very fortunate that I get to do what I love for a living. Even when I’m not training myself I still get to be around MMA and work with one of the greatest MMA fighters of all time. It can be a challenge at times to fit in time for training around my work, but consider it a great blessing and am very grateful for the opportunities I have been given.”

When questioned about who he looks to for motivation within the sport Dave answered “MMA is a sport that you need to be very self-motivated for. If it’s something you want to succeed at then you need to be the one who puts the work in. No-one’s going to be there to get you out of bed in the morning or force you to train, you need to want to do that for yourself. But I do want to sincerely thank Owen Roddy, Darragh O’ Connell and everyone at SBG Charlestown and East Coast Jiu Jitsu Academy for the countless hours of work they’ve put in with me over the years. My girlfriend Rebecca Allman has also been a huge source of support over the years, through all the injuries, competitions, work and everything else. She’s always my number one fan no matter what I do in life.”

Explaining how he handles nervous feelings in the lead up to a fight Dave claimed “Everyone gets nervous, it’s normal. It’s all about how you handle those nerves. I genuinely love fighting so when I feel those nerves kicking in I just remind myself that this is what I’ve trained all the years for so it’s something to be excited about rather than nervous.” And when asked what advice he would give to an aspiring MMA fighter he said “Just keep training and listening to your coaches. Compete as much as you can in every aspect of the sport, and above all just keep on showing up.”

Although Dave has not competed in MMA since March of 2017 he insists that he is not retired from the sport and has plans to re-enter the cage as soon as the opportunity arises, stating “Since recovering from the surgery on my thumb I’ve been very busy with work and my job can be very unpredictable in the sense that I don’t always know where I’ll be or how long I’m going to be there for, so it can be difficult to plan a full fight camp. I was scheduled to have one bout in 2018 but my opponent pulled out on a day’s notice and it was too late to get a replacement in. I’d definitely take a fight again when the time is right. I’ve been training consistently since my last fight and I feel that my skillset has improved a lot so it would be a shame to retire without really showing what I’m capable of.” Expanding on his plans for the future Dave claimed “I’ve been a blue belt in jiu jitsu since 2015 so I’ve committed myself to working towards getting my purple belt. I was training in the gi pretty consistently before the pandemic hit so I’m looking forward to getting back into that as well as getting a few more MMA fights in. I’d like to have one more shot at the IMMAF’s, it’s a goal of mine to become a world champion. While it’s not something I would rule out entirely I don’t plan on turning professional anytime soon. To succeed as a professional MMA fighter takes an obscene amount of dedication and considering how busy my work has been lately I’m simply not in a position to be able to give my training that level of commitment.”

The Irish Mixed Martial Arts Association would like to express our gratitude to Dave for his many contributions towards the success of Team Ireland at the IMMAF MMA championships and would like to sincerely thank him for his ongoing support. We would like to wish him the very best of luck as he strives to meet his goals and look forward to working closely with him in the future.