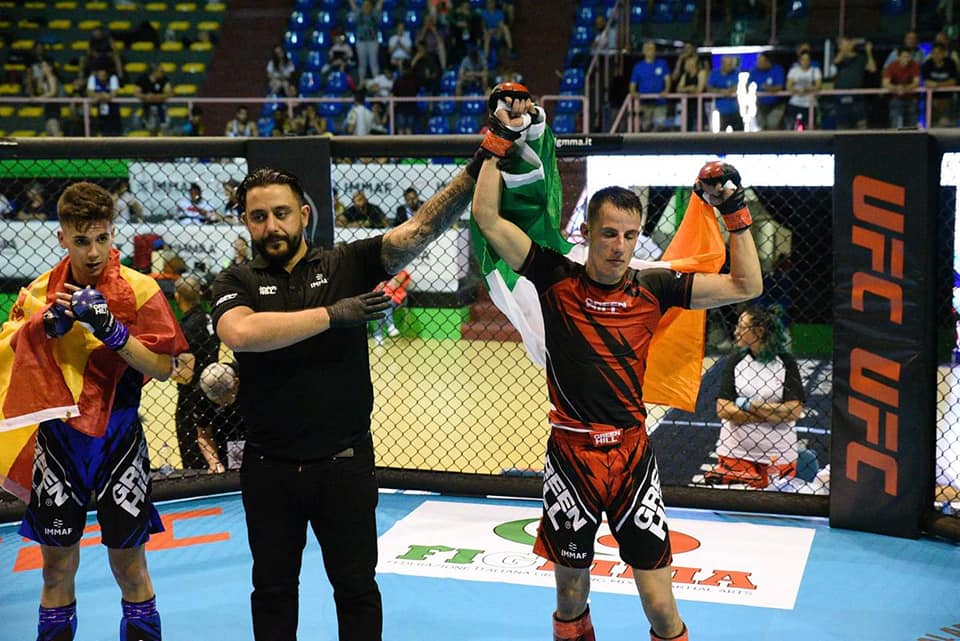 Yericks first introduction to martial arts was at age 6 when he joined his local TaeKwonDo, and although he enjoyed participating in the classes he was having difficulty getting to the premises and was unable to attend consistently. He did not return to martial arts classes again until age 16 when he joined his local youth club where they visited a local martial arts gym K2C run by IMMAA Treasurer Liam-Og Griffin and his sister Marlene Griffin to participate in classes on Wednesday nights. He recalls “Liam would show us some fancy karate moves and take us through some fitness workouts. After a while he told us that he was starting up MMA classes and invited us all to try out a class. Up until then I barely knew what MMA was. I used to watch youtube clips of Anderson Silva knocking people out but I didn’t understand what I was watching, I even used to call it cage-fighting. I got obsessed with the classes straight away and was managing to pick up the techniques fairly easily. Liam saw that a few of us were taking a big interest in it and invited us to go to a Michael Russel jiu jitsu seminar. I didn’t have a gi, and didn’t even know what a gi was at the time so Liam loaned me one of his karate gi’s for the seminar. That was my first jiu jitsu class and I fell in love with it straight away. It was so different to the striking training that we had been working on and it was a great sense of satisfaction to be able to control someone on the ground. I started picking up the techniques fairly quickly and the better I got, the more I enjoyed it. I bought myself a jiu jitsu gi and started splitting my time between MMA classes at K2C and jiu jitsu classes under Kieran O’ Brien Snr to really commit myself to it. After about a year of training Liam told us about the Irish MMA Leagues that were coming up and told a few of us that we should enter. It was spread out over a few different tournaments where you could rack up points from your fights around the country over the year. I ended up going for it and won my division overall, that was my first taste of competition.”

While continuing his MMA training and striving to build his experience and fight record Yerick suffered a serious injury which forced him to put his plans on hold. “I had stupid little accident where I fell over. It seemed like nothing major at the start and when I had it checked out at the hospital they told me it was fine even though it took me months to be able to walk properly. Because the hospital told me it was nothing to worry about I went back to training and heard my knee snap when one of the lads was going for a takedown on me. I went for more scans at the hospital where they told me I had completely severed the ACL and damaged my meniscus. I had to go through a full ACL reconstruction surgery and months of physiotherapy before finally being able to get back to training.”

Following years of excruciating pain and injury rehabilitation Yerick was keen to test himself in a competitive setting once again and attended the 2019 IMMAA squad sessions where he was selected by the coaching panel to represent Ireland internationally at the 2019 IMMAF European MMA Championships in Rome. He stated “Liam had been trying to get me matched for a fight for a good while but we couldn’t get anything. Then he mentioned that the squads were coming up for the Irish team. I agreed to go along just for the sake of it. I didn’t really have any ambitions about getting onto the team because I knew how strong the team was so I was surprised when I got picked for the team. It’s basically the Olympics of MMA. If MMA was recognised by the Olympic council then we would be Olympic athletes. It’s hard to understand how big the tournament really is until you’ve experienced it. You see all the different countries and fighters, all the previous champions and a lot of big names are there. It was a great opportunity to get back into competing, I finally felt back on the scene. It meant everything to me to represent Ireland abroad. I think any kid in any sport dreams about representing their country. When I first joined MMA that kind of opportunity didn’t exist. The whole Irish team really came together over there too. We started out kind of divided but we all got to know each other and by the end everyone was good friends looking out for each other as teammates.”

Yerick won his preliminary bout of the tournament via unanimous decision and when asked about what he considers to be the highlight of his MMA journey to date Yerick replied “It would have to be winning my first fight at the IMMAF’s. It was my comeback fight after not being able to compete for nearly six years over my injury and I had thought I would never going to be able fight again so it meant alot to me to get the win.”

Discussing the fighters that he looked to for inspiration within the sport Yerick claimed “I was a big fan of Anderson Silva at the start, especially his striking. I loved striking and I tried to base my style around a muay thai striking style. As I started to learn more about the sport I started looking at other athletes styles too like the wrestling skills of Georges St Pierre, probably one of the greatest fighters of all time and even though he’s been retired for a good while now he’s still very relevant to the sport.”

Expressing his gratitude for the people who have guided and supported him throughout his MMA journey Yerick claimed “Liam and Mar were always a huge support to me. Even when I was injured, out of training for a long time and didn’t know if I’d ever be able to come back Liam always kept in touch and would text me to see how I was getting on and making sure I was okay. He had plenty of other athletes in the gym to focus on but he always went out of his way to stay in touch and check up on me. Mar is great for looking after and motivating everyone in the gym. Even outside of everything she does for us in the gym she’s just a genuinely nice person. It’s always a good feeling when you walk in and see her with a big smile asking how you’re doing because you know that she genuinely cares. She does so much for us in the lead up to fights too between organising all of our medicals and optician appointments and always goes out of her way to make sure we’re all up to date and looked after. All my teammates on the Irish team and the Team Ireland coaches were a big help too. Nomatter what gym you came from everyone looked out for each other like teammates.”

When questioned about the biggest way in which MMA has benefitted his life Yerick answered “It’s given me something to focus on. Personally I need something to focus my attention on and always need to be working towards something and MMA is one of those things that you can never learn everything there is to know. You’re always going to be challenged through your whole career and you never stop learning so it’s something that I can really give my mind to.”

Revealing the advice he would give to any aspiring future MMA fighters Yerick stated “Just keep at it. When I first started it was just me and around five grown men in the classes for months on end so I was a bit out of my depth for a long time before I was able to hold my own.”

Addressing his plans for the future he claimed that he aims to “Keep fighting no matter what. Hopefully I’ll get the chance to turn pro at some stage and I’d definitely like to get into coaching in the gym more. I really enjoy the coaching aspect of the sport and it’s something I’d definitely want to do more of in the future.”

The Irish Mixed Martial Arts Association would like to sincerely thank Yerick for his ongoing support and contributions to Irish MMA and the Irish international team. We wish him the very best of luck and skills as he continues to progress in his MMA career and look forward to seeing him in action once again in the near future.