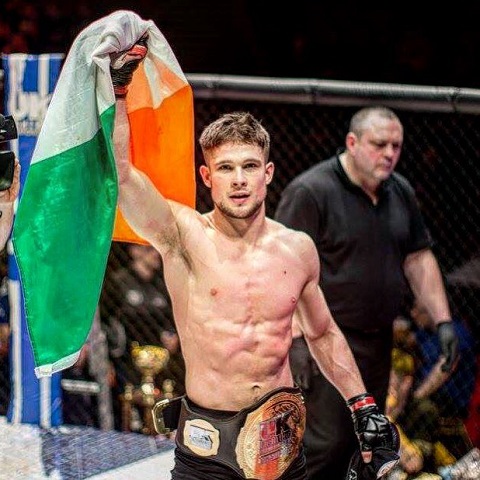 Q. How did you get started in MMA?

A. I discovered MMA when I was about 15 years old playing the UFC Xbox game, around 2009. At the time when I was playing the game I didn’t know the sport was real, I thought it was choreographed like wrestling but the more I looked into it I realised it was a real sport and I was amazed by it. I really wanted to try it. At the time I lived in County Clare in rural Ireland and there were no MMA gyms or even boxing or any martial arts clubs nearby so it wasn’t until I was 18 years old and I moved to Dublin for college that I got to try MMA. I reached out to a couple of people and everybody suggested trying SBG. I dropped into SBG in Dublin city centre around 2012. I didn’t even know who John was at the time. I didn’t really have any big plans for it at the time I thought it was like some other sports where starting at 18 is too late to even consider a professional career but I caught the bug for it straight away and I fully immersed myself in it by training twice a day.

Q. How did you come to be a part of the Irish international MMA team and what was the experience of competing at the IMMAFs like?

A. For the Europeans in Birmingham in 2015 John told us that it was going on and that we could sign Up for it. At the time I don’t think there were many people going for it so there weren’t try-outs or anything like that so I sort of got my place on the team by default. I got to meet lots of fighters and coaches from other gyms around the country. As soon as we got over there everyone got on well, it was like the different gyms didn’t exist and everyone knew we were all there as one united team Ireland. I also fought at the IMMAF world championships in 2017 in Bahrain. The IMMAFs was a different buzz to fighting at home, it’s more of a tournament style. You could have multiple fights and anyone you bump into could be your next opponent. It meant a lot to me to be representing Ireland. In the 2017 Worlds I think I let the pressure of the whole thing get to me, whereas in the 2015 competition I just kind of fed off it a bit better. I didn’t let the pressure get to me and was just happy to be representing Ireland.

Q. What are the biggest lessons you have learned throughout your MMA career?

A. I think one of the biggest lessons I’ve learned was getting to grips with nerves and how my mind acts by getting to know what will make me feel anxious/nervous/excited. Through trial and error I went through phases of my career when I was so certain about something and then realising afterwards that I was wrong about it but that’s just a part of the process of the sport, you’re always learning.I also fought a few guys at the IMMAFs that were bigger than me in size, and beat them. I think that’s one thing that I took from the experience was being able to face more physically imposing guys and being able to beat them. I think that really stood to me. I lost to two bigger guys too but that just showed me that size isn’t as important in terms of winning or losing as I thought it would be.

Q. What has been the greatest highlight of your career to date?

A. Winning my pro debut in the 3 arena definitely. It was the first point where I really felt like I had gotten a hold over my nerves and I was finally comfortable in there. I knew that all of my fights through my whole amateur career had paid off. Up to that point, especially early on in my career there were times when the nerves became almost crippling and I started to wonder would there ever come a time when I could feel comfortable in the cage so that was the point where I realised that I can actually feel really comfortable in a fight.

Q. Who have you been most inspired by within the sport?

A. At the very start when I was training in SBG City Centre there was a professional K1 fighter Wayne Grant. Seeing how he trained and fought was what really inspired me to want to fight. I remember one night specifically going to watch him fight when he won a belt and I said to myself that night ‘I want to do that’. That was back in the early days but I would have trained a lot with him and he really inspired me. Chris Fields coached me through the MMA leagues. I took a lot of inspiration from him as well from seeing how he was and how much he loved the sport. Now that I’m further on in my career I look more to my teammates for inspiration, the likes of Brian Moore. His approach to his training and he has this fearless, almost bulletproof mindset. He brought me along to corner him a few years ago in Oklahoma, he broke both his hands in that fight but finished out the fight – It was a touching display of heart.

Q. What benefits do you feel MMA has brought to your life?

A. Definitely confidence, I’d say you’d be hard pressed to find a martial artist who hasn’t grown in confidence through their training. Not only am I more confident in situations where there is a threat of violence but I also take pride in the respect that people have for fighters too. It’s an outlet to exercise discipline, gives great structure to my life and helps me build a nice routine.

Q. What are your plans for the future?

A. I’ll be very disappointed if I don’t get the opportunity to fight before the end of the year. I haven’t fought for two years now because of injuries so I would definitely  like to get at least one more fight in before the end of the year. I’m just going to build my name back up and get into the momentum that I had before. The plan is basically to just keep building, fighting and winning. I think I’ll be coming back to the sport with a lot more confidence in myself. That might seem strange considering I’m coming off of two losses following my two years off but it’s given me the time to do a lot of thinking. I’m just really excited because I have a completely new approach to it and a new love for the sport. Ireland produces a lot of incredible fighters and I’ll be regarded as one of the most dangerous. I want to be one of the reasons that Irish fighters are feared opponents. I want my name to be mentioned whenever Irish MMA is talked about.