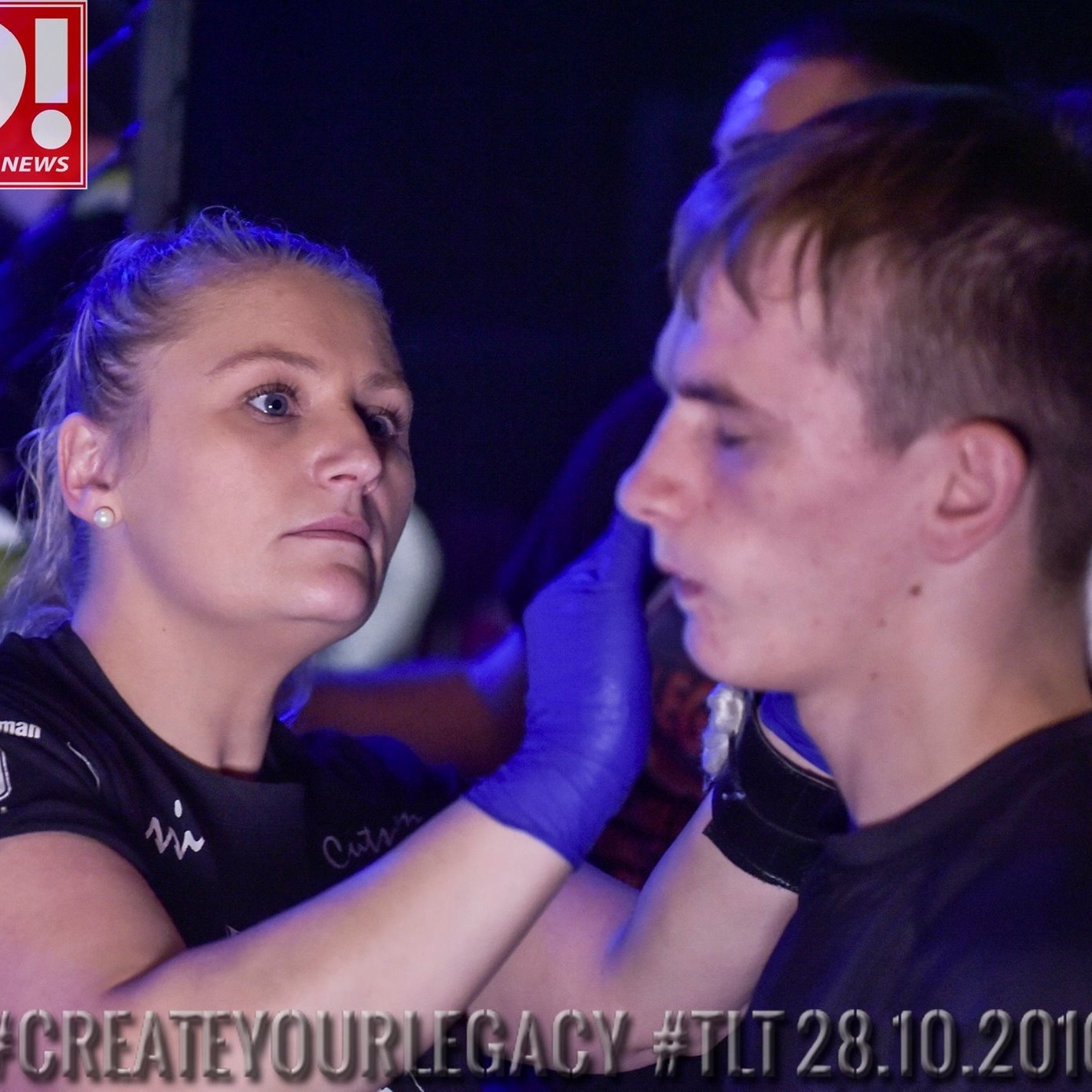 The Irish Mixed Martial Arts Association featured Official of the week is the owner/operator of Inside-Out Care and professional cut-woman Jess Isaacson.

Jess’s introduction to martial arts started at age 4 when she began attending classes in Karate and continued to train throughout her childhood and teen years. Her passion for martial arts slowly began to fade when other priorities in her life needed to take precedence such as her university studies, raising her child and her career as a financial advisor. As a keen martial arts enthusiast Jess had been following the progression of mixed martial arts since the early 2000’s, attending many shows and events throughout the country.

After leading a relatively healthy and active lifestyle Jess unfortunately and suddenly became very ill. The combination of long stays in the hospital and harsh medication caused unwanted and dramatic weight gain and so she looked to martial arts as a way to manage her weight. Taking up Muay Thai training at Warriors gym in Dublin in her early 30’s she reignited her passion for training and it became her primary form of exercise. Although she found it difficult to source opponents as female fighters were scarce at the time she participated in a number of Muay Thai fights but was frequently accumulating injuries. It was not until after she suffered a fracture to her hand mid-fight and continued to finish the fight that her attention was drawn towards the importance of the proper use of hand wraps. Shortly afterwards she was cornering a teammate at an MMA event when she saw Joe Clifford of Minute Medicine man administering hand wrapping services to the fighters. She recalls “It was the way Joe interacted with the fighters that intrigued me. Even though the atmosphere was chaotic and adrenaline was pumping he was able to gain their attention, keep them calm and wrap their hands in a professional manner. I approached him after the show and enquired about how to learn to become a cutman.” Although Joe did not have any cornercare courses coming up at the time he advised Jess to send him photos of her hand wrapping abilities and he replied with advice and constructive criticisms. After improving her hand wrapping skills under Joe, Jess joined the Minute Medicine Man team and began working as a cutwoman at combat sports events all across the country.

In her mid thirties she made the decision to cease fighting competitively and although she continued to train she loved how working as a cutwoman enabled her to still be involved in combat events in an integral and hands on position.In 2016 Jess became the first woman in Europe to work at the front of an event as a cutwoman at BAMMA MMA promotion and went on to work on Cage Warriors in Wales and Brave 13 in Belfast in 2018 where she was one of three female cutwomen to work ringside at an MMA event. Along with the Irish Womens MMA Commision member Deborah O’ Sullivan and Northern Irelands Danni Ogilvie, Jess is one of the only two cutmen within Ireland to have been awarded an IMMAF certified A license cutman qualification, an accolade which she is incredibly proud to have achieved.

After spending 5 years and hundreds of events working with the Minute Medicine Man team Jess made the decision to start up her own cornercare business in 2018, describing the newly founded Inside-Out Care as her labour of love and stating “I felt it was time to stand on my own two feet and evolve my skills further. Fighter safety has always been my highest priority and setting up my own business gave me the freedom I needed to develop my fighter safety standards further and branch out in other disciplines of martial arts also.

Jess has worked as a cutman on four separate IMMAF Championships in Prague, Bulgaria and twice in Bahrain. She considers the IMMAF events to be the perfect platform for cutmen to gain experience and further develop their skills at, claiming “You will never know how good you are as a cutman until you work an IMMAF event. With a magnitude of bouts and hundreds of fighters to adhere to it is a bustling, lively environment but is an incredibly rewarding experience and the ultimate opportunity to evolve your skills. I encourage each of my team members to work at least one IMMAF tournament because once you’ve worked at IMMAF a national show will never seem difficult in comparison.”

Noticing a lack of training courses available for those wishing to pursue a career in cornercare Jess, Brian, Danni along with a massive input from one of Ireland’s OG cutmen Tommy McCormack in developing the Inside-Out Care cutman graduate programme which consists of a seminar and workshop and enables people to gain the relevant and necessary information and skills needed to administer cornercare and hand wrapping services to fighters and promotions. Although Jess reveals that their graduate programme delves much further into educating their students than just attending the seminar and workshops claiming “There is a lot of learning and evolving involved in hand wrapping and cornercare, it’s not something you can simply learn in a day. It takes time to develop and improve your skills and learn how to interact with the fighters. We work in a fast paced and high intensity environment and it’s important to learn to perform quickly and efficiently under pressure. There is no ‘one size fits all’ standard approach here, each set of hands you wrap will be as unique as the fighter in front of you. Some hands will have scars, injuries and issues you will need to work around and some fighters will have preferences as to which way they want their hands to be wrapped. You need to listen to the fighter as they are what’s important, and understand how they want their hands wrapped because if the hand wraps feel uncomfortable to them that can ruin their routine and start them off on the wrong foot before they even enter the cage. The aesthetics mean very little, but it must feel good to the fighter. If the fighter’s not happy then I’m not happy. It’s much more important to understand how the fighter feels in their wraps than how the wraps look and remaining calm and composed will help the fighter to feel comfortable and relaxed.”

Jess takes great pride in the Inside-Out Care graduate programme and describes it as “An interactive, discussion based programme which focuses on the practical components of the trade rather than a theory/classroom based learning environment. Aside from effective hand wrapping techniques the students learn ringside etiquette, how to manage difficult situations and to administer effective treatment of injuries. The emphasis is on constantly working to improve and evolve and our members must understand that the level of care must stay consistent regardless of the circumstances. The health and safety of the fighter is just as important at novice and amateur levels as it is at professional level and our standards can never alter regardless of the size of the event. As a cutman I don’t think you should exclusively work for any promotion or association, once the safety of the competitors is the key concern for all involved then all other surrounding circumstances become irrelevant. After each and every event the team and I work we will always come together at the end of the night to discuss the areas where we feel we could improve. Essentially we critique ourselves and one another but we ensure to do so in a positive and constructive manner and it ensures that we are learning from any mistakes that have been made and taking the relevant precautions to ensure that we are constantly and consistently improving our skills.”

Although Jess has devoted herself to her career as a cutwoman over the years she admits that it is not currently a profitable full time employment option as there are not enough combat events running consistently throughout the country claiming “If someone wanted to join our graduate programme with the intentions of earning lots of money I would simply show them the door. The truth is that the opportunity to make money within the profession does not exist at the moment so it’s very important to ensure that the people on your team are in it for the right reasons and not trying to make a quick buck. Fighter safety is paramount first and foremost. Any money we make from a show is divided equally between our team. I don’t make any more than anyone else on my team.”

Jess profusely declared her endless gratitude to the people who have helped her throughout her journey into becoming a cutman and developing her business giving special thanks to Tommy McCormack, Brian Coyle, Danni Ogilvie, Fionnuala Malone, Lar Byrne, Owen Doyle, Joe Cliford and the Minute Medicine Man team and also stating “I have been very fortunate to have so many incredible and passionate people guide and mentor me throughout my experiences as a cutman including UFC and Bellator cutmen Jamie Sheldon and Adam Gigli who are always happy to help out. Tommy McCormack, who is one of the OG’s of cutmen in Ireland came on board to give me a hand and advise me on how to develop our cornercare course. In my opinion Bob Plant is one of the greatest cutman in the world and his knowledge and experience has been absolutely invaluable to me over the years. And of course my right hand man Brian Coyle who has been absolutely amazing over the years between helping me to run shows and develop the graduate programme.”

Summarizing her reasons for choosing this line of work Jess insisted “My focus is set on helping each fighter make it to the next round. Fighters put everything on the line for their sport and to see their efforts go to waste due to a cut or wound can be heartbreaking so I will do everything in my power to enable that person to go the distance while ensuring the safety of the fighter is of paramount importance at all times. Promotions bring us in for a specific job and my job lies with the health and safety of the athletes. I’ve experienced incidents where the fighters don’t want to have their injuries examined or treated, and coaches who have tried to administer cornercare themselves and in those situations it’s important to stand strong in our convictions and take appropriate control of the situation if and when needed for the best interest of the fighters. There is a lot more to running a cut team than people see. You can’t simply turn up to the show and expect for things to run smoothly, it involves countless hours of refining techniques and lots of investments into the best supplies, training and equipment available. The introduction of the SAFE MMA regulations for MMA competitors has been a huge step forward in fighter safety within Ireland and really sets a high standard which hopefully other countries will choose to follow in time through the IMMAF progression pathway if the country deems best .”

The Irish Mixed Martial Arts Association would like to extend our sincerest gratitude to Jess and her team at Inside-Out Care for their commitment to ensuring the well-being of our fighters and would like to wish them the very best of luck as they continue to contribute to Irish MMA and the progression of fighter safety.