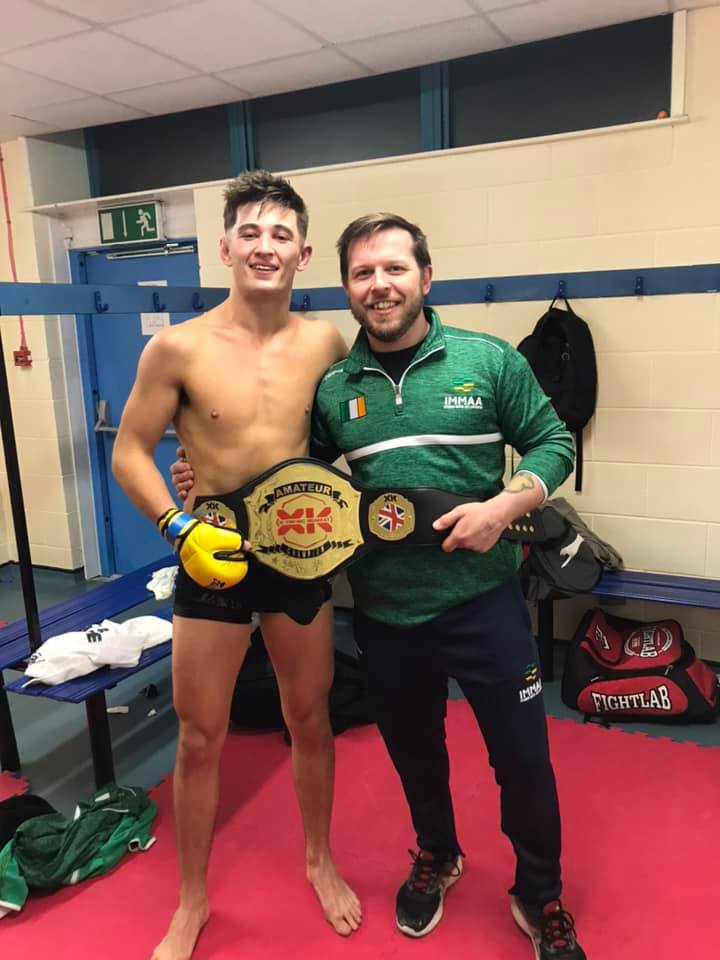 Three time Team Ireland representative at the IMMAF MMA Championships Pa ‘The Leech’ Lehane of SBG Cork City under Head Coach and IMMAA Treasurer Liam-Og Griffin is our featured fighter of the week.

Pa’s journey into martial arts started at age 10 when he began training in Taekwondo and continued to attend classes for two years before losing interest in the sport and quitting the club. At age 13 be decided to give combat sports another try by enrolling in Spartan boxing club in Togher where he claims he instantly fell in love with the sport stating “I was hooked from the very first day and as soon as I left the gym I would be counting down the time until I could return for my next class.” When peak boxing season finished, the club began to reduce the volume of classes it was offering members which frustrated Pa as he had become so engulfed in the sport that he wanted to attend as many training sessions as possible. With less time being spent at the gym Pa and his brother began to watch “The Notorious”, a series on RTE following the progression of Conor McGregor’s MMA career. Enthralled by this exciting new sport and with more spare time on his hands Pa set out in search of a local MMA gym. Enrolling at SBG Cork City with a background in boxing meant that he was capable of holding his own against training partners in sparring sessions but he soon learned that he would need to focus his attention on gaining a better understanding of the grappling elements of the sport in order to become a more well rounded fighter.

Dreading the thought of September steadily approaching and knowing that going back to school would mean less time on the mats Pa made the decision to leave formal education, and instead enroll in the Youth Reach education programme which required less hours spent in the classroom and also ensured a weekly payment which he used to pay his gym membership fees. Reflecting on this decision he claimed “I have never been particularly academic. I had a difficult time focusing at school and found the workload and environment difficult to handle. Dropping out was the best decision for me because it meant more time to focus the part of my life that I enjoyed the most – my training.” Splitting his time between training at both the boxing and MMA gyms was proving to be more difficult than he had initially thought and so he made the decision to focus his time and energy entirely on MMA. After only 3 weeks of training Pa was given the opportunity to compete at a novice MMA tournament being held at the gym. Although he insists that he knew very few techniques at the time he managed to win his first bout via standing guillotine choke, giving him his first taste of victory within the sport. 8 months later he transitioned to the amateur circuit to make his debut against Filip Blazynski at Neptune Stadium in Cork. When asked how he coped with nervousness in the lead up to the fight Pa stated “I was a bit nervous of course, that’s only natural, especially for a debut but I was more excited than anything else. Liam-Og had really ingrained the ‘win or learn’ philosophy into all of us at that stage so I wasn’t focusing on the outcome, I was more concerned with putting on a good show and demonstrating my abilities as a fighter.”

Pa went on to fight five more times on the national circuit before he was invited to attend the Team Ireland Squad training sessions which would determine which fighters qualified for the international MMA team. After being accepted onto the Team Pa needed to raise money for his travel expenses and tournament fees by working extra hours and reaching out to local businesses in the hopes of gaining financial support through sponsorship opportunities. Alongside his fellow Team Ireland teammates he travelled to Romania to compete at the 2018 European MMA Championships, followed by the 2018 World championships five months later in Bahrain, securing two bronze medals for Team Ireland and then went on to fight at the 2019 European Championships in Italy. Reflecting on his experiences competing at the IMMAF MMA Championships. Pa stated “I didn’t really know what to expect going to the IMMAF’s for the first time but I was blown away by how professionally everything was run. The rules are laid out clearly for everyone and set in stone. If you don’t make weight then you’re out of the tournament, there is no wiggle room or grey areas, which is how it should be. The high level of skill there was almost unbelievable, and having the opportunity to travel for fights, represent my country and mix with fighters from all over the world is an incredible opportunity that I’m very thankful to have had.”

Speaking of the most difficult challenge he has had to face throughout his martial arts journey Pa spoke of a particularly gruesome weight cutting experience for his fight against Mikey Byrne on Cage Legacy 11 in March 2019 claiming “I was working 10 hour days plus training every day and completely starving myself in preparation for this fight. I needed to do a pretty severe water cut and the weigh-ins were scheduled for the same day as the fights which left little time for rehydrating. I was exhausted and felt so weak at the weigh ins but I made weight. My opponent walked into the weigh-ins eating a banana and came in over the agreed weight, which was frustrating but I still agreed to the fight. Having gone through a full fight camp and weight cut there was no way I was going to leave without a fight.”

When asked what he considers to be the highlight of his MMA career to date, Pa proudly identified his impressive knockout victory over Shane Geraghty at Cage Warriors in Neptune stadium, earning him Severe MMA’s title of ‘Knockout of the year 2019’. Pa stated “That high was like nothing else I had ever experienced.  As soon as the ref called a stop to the fight I jumped up onto the cage and was able to look down and see all of my friends and family in the crowd celebrating with me, it was the most incredible feeling in the world.”

Pa is scheduled to take on C-MAC MMA fighter Alexander O’ Sullivan at Cage Legacy Halloween Havoc on October 30th for the vacant lightweight title belt and if successful in this bout Pa will become the first fighter to win Cage Legacy MMA championship titles in two weight divisions. Speaking of this upcoming bout and his plans for the future Pa claimed “I want to make the move to the professional ranks soon but before I do that I want to challenge myself as much as possible. I wanted this match-up, it didn’t happen by chance. I have no interest in easy fights or padding my record. Alexander is one of the best and most experienced amateur fighters in the country and I think he’s the toughest opponent out there for me to test myself against. My goal in this sport is to take every opportunity that comes my way, to do my family and my team proud and to look back on my career one day and be proud of what I have achieved.”

Discussing the benefits that MMA has added to his life Pa stated “MMA changed my life completely. I used to be a bit of a waster but training has provided me with direction in life and goals to strive towards. It makes you mentally stronger too. Fighting prepares you for anything life can throw at you and the principles we learn in training can be applied to almost any aspect of life. I’ve noticed a huge change in my self esteem too. I went from being a shy and nervous kid to a much more confident and self secure person. I’ve learned not to care what people might think of me because MMA can be a very forgetful sport. Take Jose Aldo for instance, when you mention his name now everyone remembers that McGregor knocked him out in 13 seconds but not many will remember what a great fighter he was in his prime.”

When questioned about what advice he would give to a young fighter about to start their journey into MMA Pa answered “Only do it if you really love it. Don’t force it if it’s not something that you’re passionate about. Focus on remaining consistent and enjoying the process. Let go of your ego and make sure you don’t focus on records or losses too much. Sometimes people get too emotionally invested in a fight and it feels like the end of the world if you lose, but just remember that life goes on and losing a fight doesn’t make you a bad fighter. Deal with whatever the outcome may be and then get straight back on the mats. As Deano Wade often says -It’s a marathon, not a sprint.”

While Pa may enter the cage alone when he fights, he insists that it is the combined effort of the whole team at SBG Cork City that has gotten him to this point in his career stating “I’m very lucky to have such dedicated teammates who are always on hand to do some extra drilling and training anytime I need it. Even when they don’t have fights coming up themselves they never miss a training session and are always willing to help me out with anything I want to work on. I couldn’t possibly ask for a better head coach than Liam, he puts so much work into helping us all out, he’s constantly coming up with new training methods for us to try out and his classes are really fun and enjoyable but challenging at the same time. He really goes above and beyond the call of duty as a coach and goes out of his way to help us out in any way he can. He even drove me the whole way across England for a fight last year on short notice. He’s a lot more than just a coach, he’s someone you can talk to about anything and always gives sound advice. There’s no one else I’d rather have in my corner. Mar has really earned her title of ‘Gym Momma’, she’s like a second mother to everyone at the gym, looking out for us but keeping us in check at the same time. She’s a constant source of support, encouragement and positivity.”

The Irish Mixed Martial Arts Association are extremely proud and grateful for the ongoing support Pa has shown in his accomplishments as a representative of Team Ireland and are looking forward to following his career as he continues to progress through the amateur ranks and onto the professional circuit.