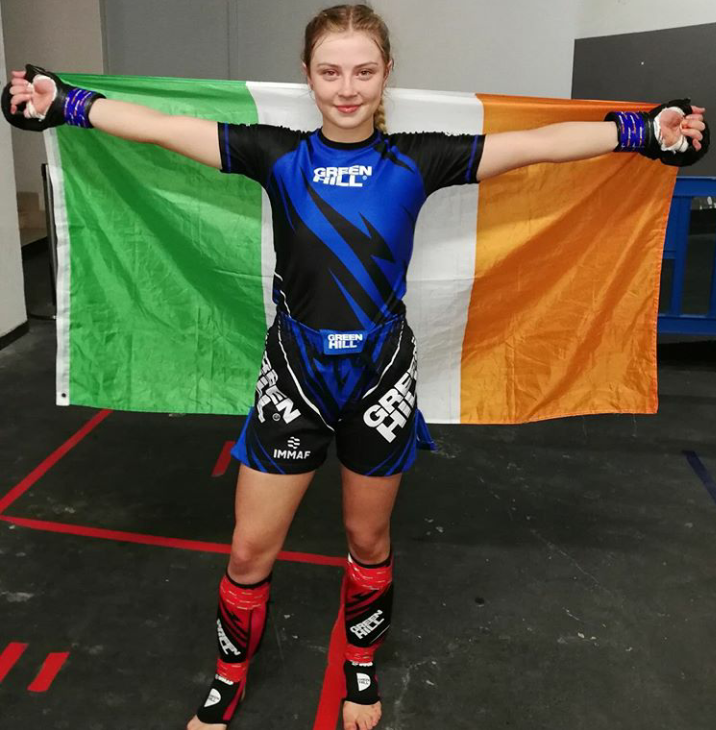 Born into one of Ireland’s most formidable fighting families Kiya’s world has centred around martial arts for as long as she can remember. Her father Deano Wade is a highly experienced boxing coach, owner/operator of CMAC MMA, he is the general secretary for the Irish Mixed Martial Arts Association and coach for the Irish international MMA team. Mother Deborah was an MMA fighter who represented Ireland at the first ever IMMAF Championships in Birmingham, she now co-owns and coaches classes at CMAC MMA as well as being an active cutwoman administering cornercare services at both national and international combat sporting events. And older brother Alexander also coaches classes at CMAC and currently holds the record for the most wins on an amateur MMA record within Ireland.

At age 6 Kiya began attending Judo classes under Ciaran Foley at Coolmine Judo Club and Brazilian Jiu Jitsu Classes at CMAC Mulhuddart under Luke Corcoran. She would also train in the fundamentals of boxing at home with her father Deano and brother Alexander. She continued to train in Judo and BJJ for 6 years until age 12, when she decided to focus all of her efforts solely on her MMA training at CMAC. She has since committed herself fully to developing her MMA career and abilities by training 6 days per week and splitting her time between training in boxing with her father and nogi Jiu Jitsu with her brother. At age 12 Kiya competed in her first novice MMA competition at the midlands open and also entered the GAMA MMA tournaments held at IMMAA gym SBG Portarlington. In 2019 she attended the IMMAA squad sessions where she demonstrated her abilities and techniques against opponents of varying sizes and experience levels in front of a panel of international coaches where her impressive technical skills earned her a place on the Irish International MMA team. At age 16 she qualified to compete at the first ever IMMAF MMA Cadet world championships for competitors aged 12-17 years old and in August 2019 she travelled alongside her fellow Team Ireland representative teammates to the IMMAF tournament in Rome.

As a 16 year old female flyweight fighter Kiyas first bout of the tournament against Italian fighter Giulia Volpe made history as being the first ever IMMAF Cadet fight to take place. After blitzing through her first two opponents with two first round submissions via armbar, Kiya earned a silver medal for Team Ireland after being submitted in the second round of the final fight. An achievement which she considers to be the greatest highlight of her MMA journey to date stating “I take great pride in representing my country on an international platform. It has always been a goal of mine to compete at the IMMAFs just as my mother and brother had done so I was thrilled when the opportunity arose to attend the cadet world championships. It felt amazing to be a part of history in the making as the first ever IMMAF cadet fight, it was almost surreal.” Further discussing her experiences competing at the IMMAF tournament she stated “The IMMAF championships are the highest level you can get outside of the professional ranks and the level of skill there is incredible. You get to meet and fight against people from all different backgrounds and nationalities and to experience the different styles each country has to offer.”.

When asked how she deals with feelings of nervousness in the lead up to a fight Kiya responded “Nerves are a natural part of fighting, you need to feel some level of nervousness for adrenaline to be released so they’re not necessarily a bad thing. You just need to make sure they don’t overwhelm you, but you don’t want to be too relaxed either, it’s all about finding a healthy balance that allows you to be excited and focused at the same time. I never worry about the outcome of a fight beforehand. That’s the great thing about having a family involved in the sport, they’ve really ingrained in me that novice and amateur records won’t matter in the long term so this is the ideal opportunity to take risks and learn from any mistakes I may make along the way.”

Kiya identified two major obstacles she has had come up against throughout her MMA journey stating “Unfortunately there’s not a huge amount of female MMA fighters in Ireland, especially in my weight division so I tend to come up against the same handful of people at each tournament, that’s another thing that’s so great about the IMMAF’s, there’s a huge range of fighters from all around the world so you’re guaranteed fights.” The other challenge Kiya has faced has been finding training partners close to her weight. She claims “The lads at the gym are great to train with and all but I would love to have more people my own size to train with because sometimes when you’re training with people who are bigger it can be hard to tell if your technique was right or not because of the difference in size and weight.”

Discussing her plans for the future Kiya revealed that she wants to return to the IMMAF MMA Championships to fight as an adult in the junior and senior age divisions and wants to gain as much experience as she can at amateur level by taking every opportunity to fight within both Ireland and the U.K. before making the transition to the professional ranks.

Speaking of the benefits MMA has brought to her life Kiya stated “It definitely gave me a huge confidence boost and made me realise just how brave I can really be. It prepares you for anything life throws at you because if you’re able to go out and fight an opponent in front of a crowd, almost nothing else in life seems scary in comparison. It’s made me realise the importance of being disciplined over motivated too because it’s easy to train when you’re feeling motivated but it takes discipline to put in the hard work on the days where you don’t feel like it. I’m very lucky to have found a sport that I love so much, I never miss a training session because that’s where I genuinely want to be and it’s where I get to be the best version of myself.”

When questioned about who she looks to for motivation within the sport Kiya mentioned UFC fighter Valentina Shevchenko, claiming “Striking is my favourite aspect of MMA and she’s an awesome striker with perfect technique, but she’s also very mature and humble.” Kiya was also quick to point out that she doesn’t need to look very far to find inspiration stating “I really look up to my brother Alexander in all that he has achieved in MMA. He has fought 4 times at the IMMAF’s and returned home with a medal each time and has one of the most successful records in Irish amateur MMA and is always helping me advance and improve my techniques. I’m very lucky to have a family who understands the commitment and sacrifices involved in being an MMA fighter. I think a lot of parents out there wouldn’t be too keen on their daughter becoming an MMA fighter whereas my family support and encourage me every step of the way. They understand each aspect from a first hand perspective and are always on hand to give me guidance and advice wherever I need it. Our passion for MMA has really connected us and brought us all closer together as a family.”

Upon being asked what advice she would give to young girls looking to start a journey in MMA Kiya answered “Never give up. It won’t always be easy but as long as you keep showing up and putting the work in you will get to where you want to be. Make sure to focus on yourself and your progression, everyone develops at their own speed so don’t compare your journey to anyone else’s. As long as you enjoy what you’re doing and remain consistent the results will speak for themselves.”

The Irish Mixed Martial Arts Association, along with the Irish Women’s MMA commission are extremely grateful to Kiya for her ongoing support and commitment, and are incredibly proud of her achievements within the sport. We look forward to watching her career develop further and wish her the very best of luck and skills as she continues to progress in her career and contribute to the Irish MMA community.