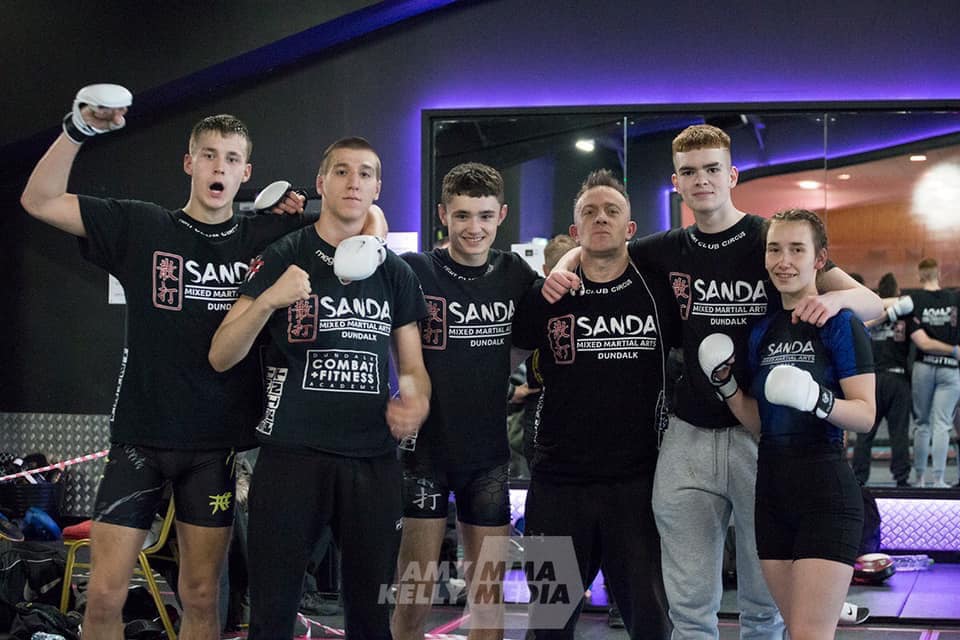 This week’s IMMAA featured article is covering the establishment and development of IMMAA club Sanda MMA in Dundalk and the experiences of Head Coach and President of Cage Legacy Fighting Championships Darren Sonik.

Darren’s first introduction to martial arts occurred at ten years old as he was preparing to leave the gymnastics club he was training at. On his way out of the building he saw people laying down foam mats and he began to question what they were using them for. Upon being informed that they were training in the sport of aikido, Darren asked if he could join them and spent the next two months training in the Japanese form of self defense where he believes he first ‘caught the bug’ for martial arts. Going on to train under Judo blackbelt Darren Cherry he found he had a particular love for the grappling aspect of the sport but over time felt the need to pause his martial arts training to pursue other sporting avenues. After completing his secondary school education Darren, who had displayed unmistakable talent on the football pitch was awarded a scholarship to play soccer in America which he was keen to pursue but unfortunately after a short period of living in the U.S. he suffered a severe and career-ending knee injury which he still suffers from to this day.

After deferring his college course in New York he returned him to Ireland to pursue his passion for martial arts. He became a disciple of Wu Dang Thai Chi Chuan and followed the teachings of Master Chen Kin Hung and various other highly accomplished and knowledgeable experts in martial arts including Dan Docherty and became a student of Niall Keane’s. Darren spent the years that followed travelling to various parts of Ireland, England, Europe and Asia, training and competing in many disciplines and dojos in the hopes of furthering his experience and understanding of martial arts. He stated “I was extremely fortunate to find myself in a position where I was able to travel, work, train and fight at the same time and my martial arts journey has brought me to some incredible destinations over the years including Changzou, Beijing, Bangkok, Phuket, Amsterdam, Germany and India. And the only thing better than the places I’ve seen, have been the people I’ve met along the way. The beautiful thing about martial arts is that it doesn’t matter where you’re from or what language you speak because we all speak a universal language of respect and hard work. I’ve been incredibly lucky to have the opportunities to learn from the many global influences of Masters and friends worldwide from different styles and backgrounds including the likes of Oron Deachkalon and Master Maxkanna.”

In 2010 Darren was blessed to own his own private gym in one of his warehouses and moved everything into a 14,000sqf building creating The TSR Gym (The Strong Room Gym) Darren used the premises as a space to teach martial arts, self defense and strength and conditioning classes to students, amalgamating the lessons he had learned through his travels into his coaching enabled him to provide his students with new and interesting training styles and techniques unable to be found elsewhere in Ireland at the time.

At 43 years old Darren was still managing to operate an active fighting career alongside his  coaching duties and made the decision to travel to Thailand for a 12 week long intense training camp and had multiple fights lined up. Unfortunately during his first week in Phuket Darren was on his way to coach a class at a nearby gym when he was involved in a serious motorbike accident which changed the course of his career path forever. Determined to stay true to his commitments, he continued on to the gym and taught a Pro Sanda class before collapsing and being rushed to the hospital to have his injuries assessed by medical professionals. Darren recalls this incident as a pivotal moment in his career stating “I remember the other coaches thinking I was mad for not going straight to hospital after the crash. I spent the next eleven weeks working closely with them in camp with other fighters and they kept telling me I was made to be a coach. That was my epiphany moment when I realised that my fighting days were over and it was time to focus my time and energy on coaching and raising the next generation of fighters.”

After returning to Ireland in 2014 Darren made the decision to rebrand his gym and when deciding upon a new name he claims the choice was obvious, stating “I wanted a name that genuinely meant something to me. Through my travels I had spent a large portion of my time training in Sanda style combat which was the original version of MMA, combining both traditional and modern martial arts and a mixture of striking and grappling techniques. It seemed fitting that I should name my gym after the discipline I have devoted so much time to.” At the time Darren was a proud associate of The Irish Chinese Boxing Association who had begun to run Sanshou and Sanda tournaments nationwide until the passing of the President of the Association, Grand Master Wally Dillon whom Darren respected greatly and has very fond memories of. He stated “Grand Master Dillon was the glue that held our community together. When he passed away each of our members went our separate but amicable ways.”

Alongside long term friend and fellow MMA coach Declan Kenna, Darren helped to create Ireland’s leading MMA promotion Cage Legacy Fighting Championships in 2016 because as Head Coaches they saw how incredibly hard their students were working but were aware that it was becoming increasingly difficult to attain fights within Ireland. Feeling that there were not enough opportunities in Ireland at the time for fighters to compete in a controlled and safe environment and having both come from a diverse combat background, they wanted to provide a platform for fighters to showcase their skills in their home country.

After a busy year of planning, promoting, creating and developing their brand, Cage Legacy 1 premiered in October 2016 proving to be a staggering success as ticket sales far exceeded expectations and the electric atmosphere experienced on the night generated great excitement among the Irish MMA community.

Cage Legacy Fighting Championship has since branched out into three distinctive combat promotions including Cage Legacy MMA for mixed martial artists, Cage Legacy Kickboxing for K1 bouts and Cage Legacy Future Stars which gives competitors aged 6-15 the opportunity to take centre stage and demonstrate their abilities in K1 striking contests. Since its debut show in 2016 Cage Legacy has hosted 12 MMA events, 5 kickboxing events and 5 future stars events which have contributed greatly to the progression of Irish combat athletes of all ages, sizes and experience levels.

In 2017 Darren attended the IMMAF European MMA championships in Bulgaria as a coach for the Irish International MMA team. Describing this opportunity he stated “It was a true privilege and an honour to help coach the Irish team at such a world class tournament. From the perspective of both a coach and a promoter I was completely blown away by the phenomenal performances displayed and also how efficiently everything was run. Knowing first hand the work that goes in behind the scenes of running an MMA event I was able to truly appreciate the hard work that the IMMAF team put into running the tournament. Seeing the whole team put aside any differences and rivalries to come together as one team and represent their country as a whole was a heartwarming experience too, and I also had the pleasure of getting to know Professor Dan Healy, ex UFC fighter Aisling Daly and coach Conor Dillon. It was certainly an experience that I will treasure and I would encourage every fighter and coach out there to aspire to attend the IMMAF championships at least once in their career.”

Currently Sanda MMA offers a variety of martial arts and fitness classes catering to ages 5 and over including Sanda Ninja Army classes for children, freestyle Siam style boxing, wrestling, both Gi and Nogi Brazilian jiu jitsu, MMA, Sanshou and numerous strength and conditioning classes with Darren stating “My role as a coach is simple, it is to help my students succeed in their goals, whatever they may be. Some of my students want to go on to become a world champion, whereas others are training to simply become better than they were yesterday and my job is to make that happen. It’s an investment of my time towards helping people become better versions of themselves.”

When questioned about who inspires him Darren identified Sanda and MMA fighters Muslim Salikov and Zabit Magomedsharipov as fighters whom he takes great inspiration from due to thier slick technical abilities and humble attitudes. And of course Darren has big admiration for Conor McGregor for inspiring a whole generation of Irish fighters. He also believes that his own students inspire him on a daily basis by seeing their constant and consistent improvements and dedication to the sport and team. Speaking of what lies ahead for Sanda MMA in the future Darren claimed that they plan to continue their phenomenal competitive success rate of 84.5% and will continue to build, grow, learn and develop together as a team to the very best of their abilities.

Discussing why he made the decision to join and support the Irish Mixed Martial Arts Association Darren claimed “IMMAA is the nucleus of the Irish MMA Community. It is the driving force behind achieving formal recognition of MMA within Ireland and provides us with the opportunity to pool our energies and efforts and push forwards together as one united community in order to provide our athletes with the resources and recognition they rightfully deserve.”

The Irish Mixed Martial Arts Association would like to extend our many thanks to Darren and his team at Sanda MMA for their ongoing support and contributions to the Irish MMA Community and international team. We look forward to witnessing their future ventures within the sport and wish them the very best of luck and skills and they continue to devote their time and efforts to their mixed martial arts journeys and the progression of Irish MMA.