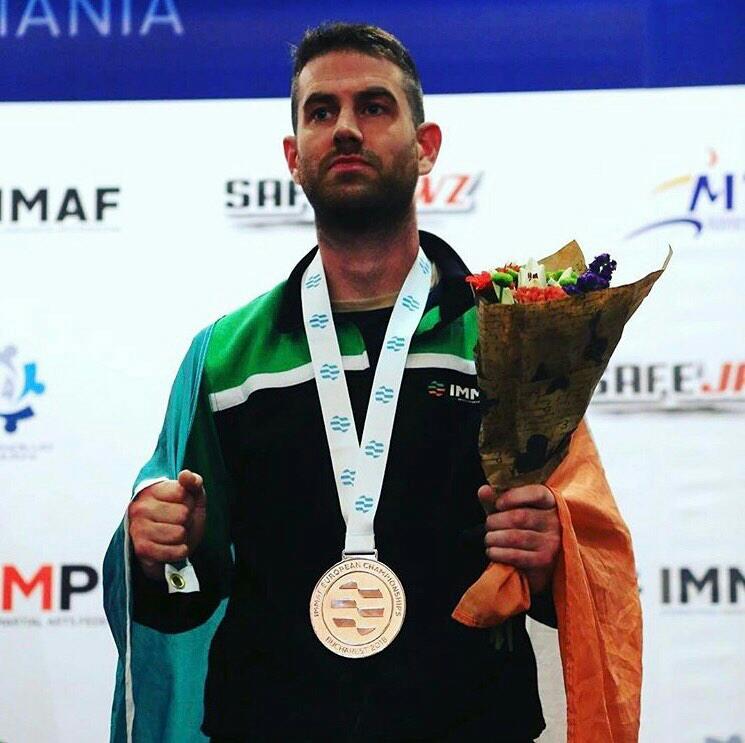 Cathals martial arts journey began at age 14 when, after finishing his soccer training one day he noticed a group of people kicking pads and upon enquiring as to what they were doing he was introduced to the sport of kickboxing. Intrigued by what he had seen he then enrolled in Black Dragon kickboxing club in Galway and went on to achieve many impressive successes and accomplishments within the sport of kickboxing including 5 Irish junior titles, 5 European titles across 4 nations, a bronze medal at the WTKA World Championships and won a World title in 2011. Cathal recalls “After winning the world title I felt I had really achieved all that I could in kickboxing so I went in search of another sport to challenge myself at.” In 2011 he joined Crumlin boxing club under Irish olympic boxer Phil Sutcliffe and after returning home to Galway he switched to Corrib boxing club in Galway under Coach Sean Commiskey where he went on to win the Connacht senior championship and reached the all Ireland boxing semi-finals.
Reminiscing on this period of his life Cathal stated “At that time I was beginning to lose interest in striking. I was on the verge of hanging up my gloves, calling it a day and leaving combat sports for good but I was working as a doorman with a friend of mine, Jason Quinn who was training in MMA and kept on at me to come along and try out a class. I was in two minds about it until I went over to Las Vegas in 2015 to UFC 189 to see McGregor vs Mendes. I remember watching the undercard and realising that with my striking skills I wouldn’t have looked out of place in those fights. I came to a decision then that I’d take Jason’s advice and try out an MMA class when I got back to Ireland.” Entering Point Blank Submissions gym in Galway for the first time Cathal admits that he had initially underestimated the power of grappling as he described the experience as humbling and claimed “I never expected to be in a position where a 60kg geeky, scientist could effortlessly wrap me up like a bow tie but that’s exactly what happened. It was a bit of a knock to my ego but it made me realise the importance and effectiveness of strong wrestling and jiu jitsu abilities.”

Coming from a highly experienced striking background Cathal made no hesitation in accepting his first amateur MMA fight on CRC at the Wright Venue in Swords in December of 2016. Facing Polish fighter Mikolaj Ziolko in the classic wrestler vs striker bout Cathal suffered a devastating defeat via armbar 50 seconds into the first round of the fight. Although his vast experiences competing in martial arts helped him to learn how to deal with and accept a loss he describes this particular defeat as a huge knock to his confidence stating “I had never been stopped before in any of my over 130 kickboxing and boxing fights. All of my previous losses had gone the full distance so to be stopped in less than a minute into my MMA debut was a huge disappointment for me. I was embarrassed, ashamed and had a bruised ego so I disappeared from the gym for quite a while. After feeling sorry for myself for long enough after a number of months I finally made the decision to return to my MMA training, and this time I was so determined to never experience a loss like that again that I fully and wholeheartedly committed myself to my training, focusing solely on improving my grappling skills.”

Although he was primarily training out of IMMAA gym Point Blank Submissions under Head Coach and IMMAA Garda Vetting Officer Tim Murphy at the time Cathal would also regularly attend training sessions at Team Ryano HQ when he was in Dublin. After returning to the cage in November of 2017 to defeat Trevor Makengo at Celtic Gladiator, Cathal set his sights on competing at the competition which he considers to be the pinnacle of amateur MMA, the IMMAF MMA Championships. Once accepted onto the Irish international MMA team through his performances at the national squad sessions he travelled to Bucharest, Romania to compete as a member of the Irish international MMA team at the IMMAF European MMA Championships in June of 2019 where he secured a bronze medal for team Ireland after competing in three MMA bouts throughout three consecutive days.

Summarizing his experiences at the IMMAF tournament Cathal said “Having been to the kickboxing world championships I had a certain idea in my head of how the IMMAF’s would be but it really was far above and beyond everything I expected. It was run so expertly and professionally, it was easily 10 times superior to any championship tournament I had ever attended. I consider the IMMAFs to be the highlight of my amateur MMA career and I credit it with being the experience that most prepared me for my professional career. I would advise anyone intending to turn professional in the future to make sure you attend at least one IMMAF competition first because the IMMAFs are the ultimate test of skill and abilities. If you can medal at the IMMAFs it’s a great indication of what level you are at as a fighter. It’s a very fulfilling experience too to be able to represent your country at such a world class tournament and to meet and build relationships with fighters and coaches from all over the world. It was great to get to know and bond with the other fighters and coaches of the Irish team, I made some lifelong friends there and the IMMAFs is where I officially joined team Ryano. It was in the changing room after my last fight when Andy Ryan put his arm around my shoulder and said ‘It’s official, you’re one of us now.’” Shortly after returning to Ireland Cathal made the decision to progress to the professional ranks and was signed with BAMMA professional fight promotion. Unfortunately BAMMA went out of business before Cathal had the opportunity to make his professional debut and he revealed that his only regret from this period was that he did not attend the IMMAF world championships in Bahrain.

Speaking of the climax of his MMA career to date Cathal identified his performance at Cage Warriors 110 in Cork as a pivotal moment stating “My opponent was a high level grappler who had gotten me into a prime position to sink in a rear naked choke. I managed to escape the position and went on to win the fight via ground and pound in the second round. That was a real eye opening moment where I started to realise just how far my grappling abilities had come on that I was able to escape such a vulnerable position.” Discussing some of the obstacles he has faced through his journey he claimed “Overcoming ego was a big one. It can get pretty frustrating when guys half your size can tie you up in knots so learning the fundamentals of grappling was something I had a hard time with at the start. Looking back I think I missed out on a great opportunity by not attending the IMMAF World Championships. I was in a bit too much of a rush to turn pro because I was already 30 at the time and I wasn’t getting any younger so I felt the need to go pro at that stage but I think going to the worlds would have been a great opportunity for me.”

When questioned about who he considers to be his inspiration within the sport Cathal claims he had no shortage of motivational figures to motivate and guide him through his career stating “Jason Quinn was the man who first introduced me to the sport, and I’m very grateful for that, I took a lot of inspiration from him and the dedication he gave to his training. Tim Murphy was definitely a huge influence on my career, he’s an incredible grappler who has won both IBJJF European and World titles and him and Gary Mannion did wonders for helping me to improve my grappling so I was very fortunate to have them as my coaches at Point Blank. I couldn’t possibly name everyone who has helped me along the way there’s been so many, from coaches to training partners to everyone who has encouraged and supported me over the years especially the IMMAA coaches who organised everything for us to get to the IMMAFs, Liam-Og Griffin and Kieran Davern. The work they do behind the scenes is endless and I don’t think people realise they work they put in on our behalf. The Team Ryano lads especially deserve a shout out here for all the hours they’ve helped me put in. Those lads are animals of a different breed, they never stop. If I can even manage to do half of what they do then I’ll be happy. Last but by no means least of course my head coach Andy Ryan. I consider him to be the godfather of Irish MMA, he’s helped shape MMA in this country into what it is today. He’s straight to the point and doesn’t beat around the bush. He’ll never blow smoke up your ass, he calls a spade a spade and that’s the way a head coach needs to be, honest but fair. I can’t thank him enough for everything he’s done for me and helped me with over the years.”

Discussing his plans for the future Cathal revealed that while he is optimistic that he has a bright future in MMA ahead of him, he chooses not to look too far ahead and instead tries to focus on each fight at hand, explaining “MMA is a tough sport. You can be on top of the world one minute and all it takes is one loss to make you feel two feet tall. It’s a sport where anything can happen so I just take each fight as it comes and try to focus my attention on learning as much as I can, improving my techniques and giving it my all.”
When asked what advice he would give to a person about to start their MMA journey Cathal stated “Take everything with a pinch of salt, a win doesn’t mean you’re the best and a loss doesn’t mean you’re the worst, it’s all a learning curve. Don’t let your ego get in the way of your training and don’t ever be too stubborn to tap. Some people confuse tapping out with giving up, but the more you tap, the more you learn. Consistency is definitely key, it doesn’t matter how hard or how often you train, what matters most is that you keep on showing up. And don’t be in a rush to turn pro, once you go pro there’s no going back, so make sure you’re availing of every opportunity and enjoying the journey.”

The Irish Mixed Martial Arts Association would like to extend our sincerest thanks to Cathal Manning for his contributions and achievements as a Team Ireland representative and we wish him the very best of success in his future endeavors within the sport of MMA.