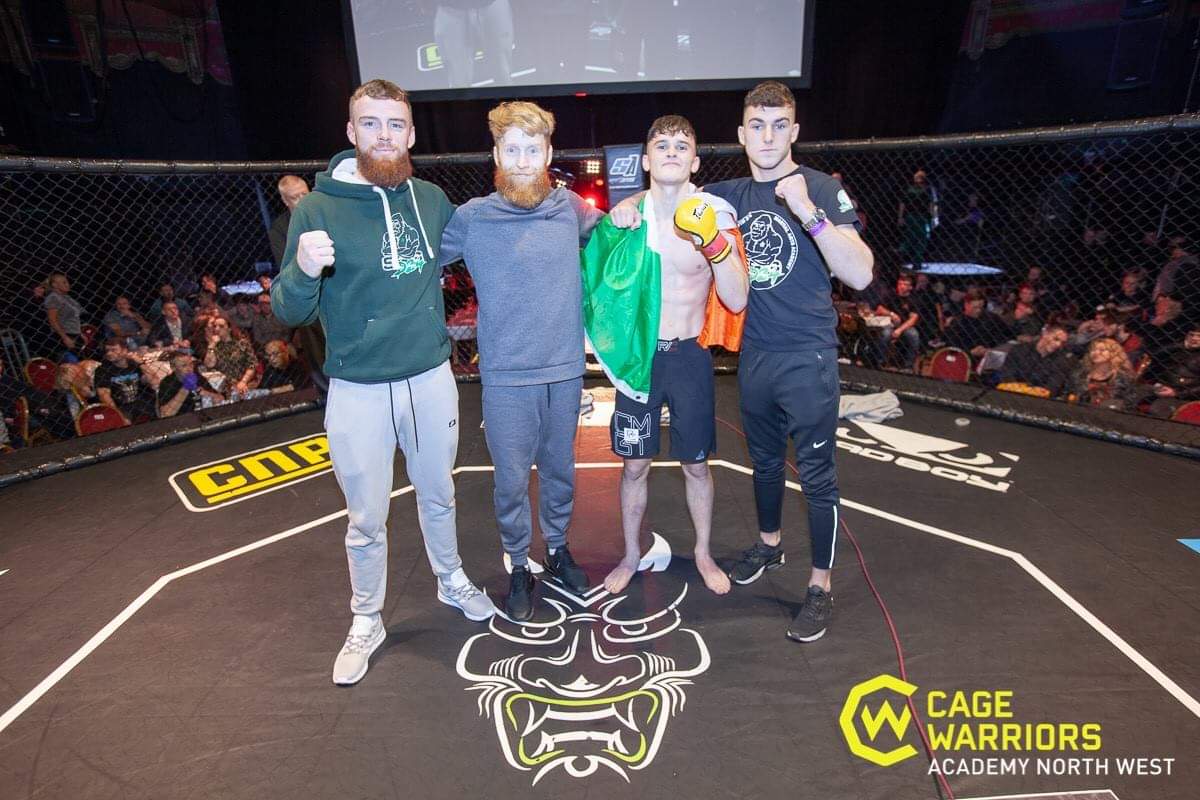 The Irish Mixed Martial Arts Association featured fighter of the week is Mikey Byrne of IMMAA gym SBG D24 under Head Coach and ex UFC fighter Paddy Holohan. Currently standing at 3-1 as an amateur fighter this up and coming prospect will be looking to add another win to his record when he takes on CMAC MMA fighter Keith Keogh for the featherweight title next month at Ireland’s leading MMA promotion Cage Legacy MMA.

As the grandson of three time Irish senior lightweight boxing champion Liam Clarke, Mikey grew up with a respect for, and great interest in combat sports, planning to someday follow in his family’s legacy and venture into a career in the sport of boxing. However when Irish MMA legend Conor McGregor of IMMAA gym SBGI made headlines across the world for his achievements within the sport of Mixed Martial Arts, Mikey became infatuated with this exciting new sport and chose instead to pursue a career in MMA. After initially spending some time training at Ryoshin MMA gym, Mikey’s friends persuaded him to try out a class at SBG D24. Speaking of his first impressions of the gym Mikey stated “I had put off joining an MMA gym for so long because I was afraid there would be a macho man attitude, the training would be brutal and rough and that I would be picked apart by the more experienced members but it turned out to be the complete opposite. The atmosphere was warm, welcoming and friendly and the training element was much more technical than I expected. I took to the boxing classes straight away. Striking seemed to come naturally to me but grappling on the other hand was a skill that I struggled with for quite a while. It took some time but after realising that jiu jitsu could allow a small guy to beat a much bigger guy using technique over power I started to understand the sport a bit better, I found my rhythm and took each lesson in like a sponge.”

After training for only several months Mikey was keen to test out his skills against other opponents in a competitive situation. He competed multiple times at the Midlands novice MMA open event at IMMAA gym SBG Portarlington and emerged undefeated having bested each opponent he encountered. Opting to progress to the amateur ranks he submitted Nauris Bartoska via armbar at Cage Legacy 4 in Drogheda and went on to win his following two fights on Cage Warriors via unanimous decision and armbar respectively before succumbing to his first and only defeat against IMMAA gym SBG Cork City fighter Patrick Lehane in March of 2019. Recalling the moments leading up to his early fights Mikey stated “I was absolutely terrified at the thought of fighting in front of a crowd at first. I was very aware that many of the people I would encounter had been training in combat sports since a young age whereas I was relatively new on the scene. The nerves always subsided once I reached the event though and as soon as I would enter the cage I felt totally comfortable and at ease. I knew I belonged there.”

When asked about the highlight of his MMA career to date Mikey claimed that despite the outcome, he considers his bout against Patrick Lehane to be his greatest achievement yet claiming “Ever since I started MMA it was always my goal to headline an event. Pa and I were the main event that night, in my hometown of Lucan, with all of my friends and family there to support me and the event was held directly across the road from the house I grew up in, it was surreal. Obviously it was a bit of a disappointment that I lost the fight because I was so invested in it and with it being my first ever loss it was a tough blow to take but I didn’t want to fall into the trap of doubting myself because of it. I was no longer undefeated but it brought me back down to earth and I knew I had all the tools I needed to improve and learn from it.” Discussing the obstacles he has faced throughout his journey Mikey stated “I had to give up a lot of my social life.When all of my friends were out partying and enjoying themselves I was in the gym, which was tough to do at the time but looking back I wouldn’t change any of it now.”

Following a stellar performance at the Team Ireland squad sessions Mikey was selected to compete at the 2019 IMMAF European MMA Championships in Rome as a member of the Irish international MMA team when he suddenly suffered a bucket handle tear to his meniscus which required surgery and extensive rehabilitation, meaning he was unable to attend the tournament. He also planned to compete at the 2020 IMMAF European Championships and his fight against Keith Keogh was originally scheduled to take place in March 2020 before the Covid-19 global pandemic put a halt to all upcoming events. Speaking of his plans for the future he stated “I want to gain as much experience at amateur level as possible and definitely hope to attend the IMMAF Euros and Worlds. I’d consider it a great honor to represent my country at such a high level and put my skills to the ultimate test against fighters from all across the world. I’ve really enjoyed my experiences competing on Cage Warriors events so I’ll be hoping to sign with them as a professional one day, and then hopefully on to the UFC after that.”

Speaking of the benefits that MMA has provided him with, Mikey claimed “Before I found MMA I didn’t have much direction in my life, I was a bit lost. This sport gave me goals to work towards and made me a much more disciplined person. It has taken over my life completely, when I’m watching TV I’m watching UFC fights, if I’m on my phone I’m watching techniques, I’m always doing something to do with martial arts.” When questioned about what lessons he has learned throughout his MMA journey Mikey responded “It took me a while to realise the importance of recovery for the body. I’ve injured myself quite a few times over the years and I was always in too much of a rush to get back to training which would usually result in damaging myself even further. I’m starting to realise now the importance of looking after your body properly, you’ll reap what you sow.”

While MMA is often considered to be a solo sport, no fighter can ever truly reach their potential without the help and support of their team. Discussing the people who have assisted him throughout his experiences training in MMA Mikey stated “Paddy and Chelsea have been amazing the whole way through. The time and effort they put into not only me but everyone at the gym is unbelievable, I couldn’t ask anymore of them. Noone but Paddy could have gotten me to the level I’m at now and I have full faith that he’s going to be able to take me a lot further. Andy, Joey and Sam have helped me loads with my ground game,  they’re absolute wizards when it comes to jiu jitsu and our striking coaches Gabor and Matino have really brought my striking to the next level.”

The Irish Mixed Martial Arts Association would like to extend our thanks to Mikey and his team at SBG D24 for their ongoing support and contributions to Irish MMA. We would like to wish him the greatest of luck and skill as he continues to learn and grow as a fighter and we look forward to hopefully welcoming him to the Irish International MMA team in the not too distant future.