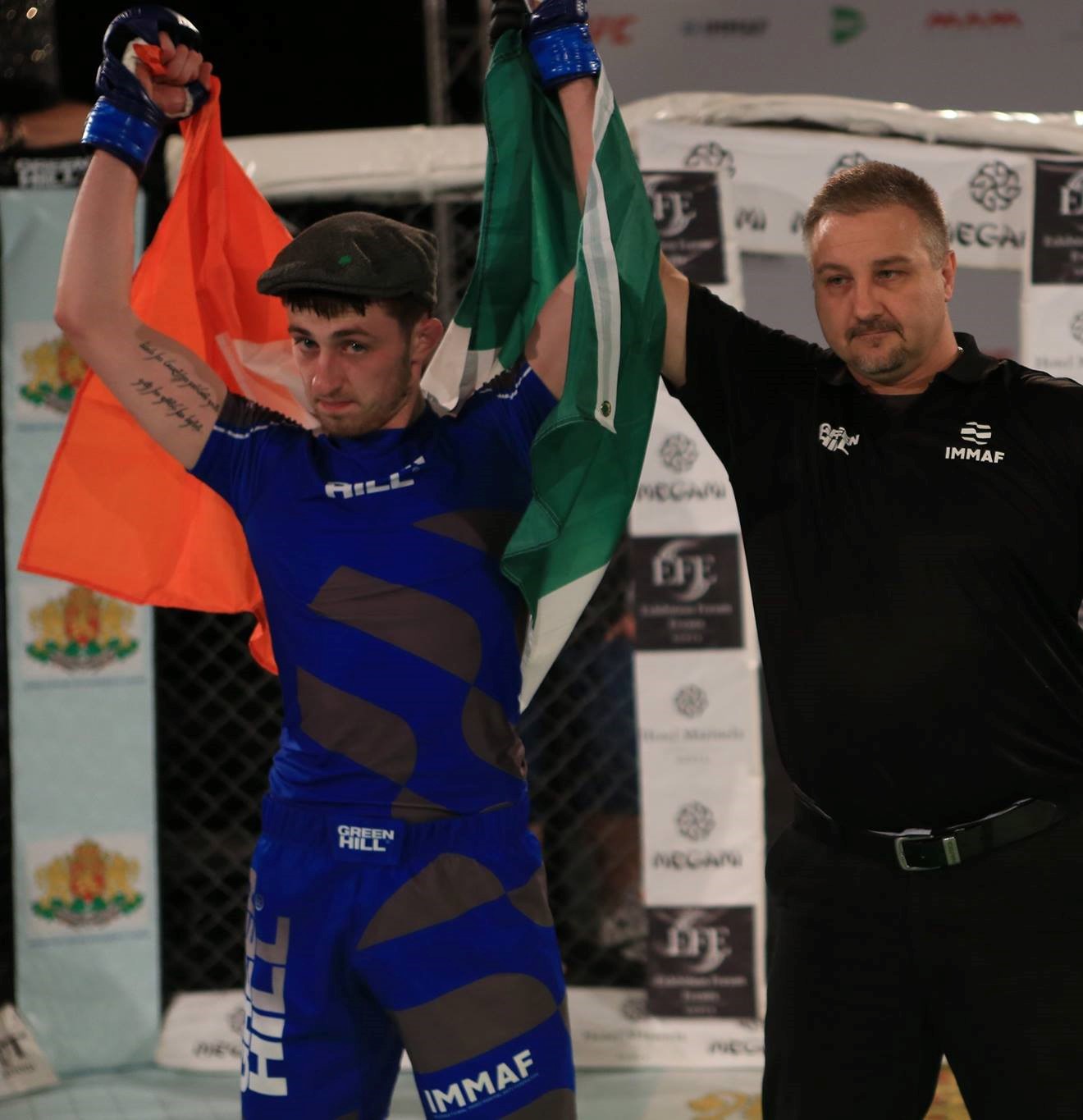 As one of five children Jack claimed that sibling rough-housing played a pivotal role in encouraging him to pursue martial arts stating “My older brother Arann was training in jiu jitsu at BJJ Cork with Liam Beechinor and then my younger brother Callan got involved too. I was more interested in soccer until one day I came home and started to pick on Callan, who had been training for about a year or so at the time. Without hesitating he threw me to the floor with a double-leg takedown, took mount and slapped the face off me. As his older brother I was horrified to realise that my younger brother could overpower me so I quit soccer and began training in MMA and jiu jitsu. When I started Liam had just offered Arann the opportunity to begin coaching MMA classes at the gym after the jiu jitsu lessons. I was completely hooked from the very start and was training from 4-8pm on almost a daily basis.”

Jack recalls the feelings of anxiousness he felt before making his MMA debut against SBG Cork fighter Paudie Cosgrove on Cage Kings 3 in Neptune Stadium in Cork in October 2015 stating “I was so nervous in the lead up to that fight. Even though I loved the training I was unsure of how I would react to the competitive side of the sport. I had been at a lot of Aranns fights before but it all seemed so different when it was my turn to step up. I was living next to the venue at the time and my nerves were so bad that at one stage I genuinely considered just locking my door and not showing up. I was absolutely petrified but once I got in there the adrenaline took over and I was able to go out and perform. It was all such a rush that I couldn’t even remember what happened in that fight, and there were no recordings of it as far as I’m aware so it’s all a bit of a blurr. I just remember being in the back room after I had won and being absolutely wired with adrenaline. It was this overwhelming feeling that I couldn’t wait to get back out there and fight again. I realised then that fighting was something I wanted to pursue long term.”

Speaking of the highlight of his competitive career to date Jack stated “I have a lot of fond memories of training and fighting over the years. I try not to focus on them too much. I am grateful to have experienced every high point along the way but I prefer to choose to look forward to what lies ahead in the future rather than relive the moments that happened in the past. Although my most recent highlight was my last fight on Cage Warriors against Ciaran Mulholland in Manchester. It was a big moment for me as I had lost in my professional debut in Cork in front of my hometown crowd and all my family and friends so it was nice to be able to come back after such a loss and be able to perform well and really showcase my abilities.”

Jack has represented Ireland at three separate IMMAF MMA tournaments, the 2017 European championships in Bulgaria, the 2017 world championships in Bahrain and the 2018 European championships in Romania. He claimed “It was an absolutely brilliant experience to be able to represent my country at such a high level. I couldn’t recommend the IMMAFs more to any aspiring fighters, it’s a fantastic place to gain experience, put your skills to the test and meet fighters from all over the world. It’s a great opportunity to rack up a lot of fights and be a part of such a big and well run event.  It felt amazing to go over as one united Irish team rather than members of separate gyms and I  made some great friends with my teammates on the Irish squad. It’s a very different scene but an overall fantastic experience to be a part of. Representing my country is something I’m very proud of. In the moment it can be difficult to take it all in, you’re so focused on the task at hand that it’s hard to realise what a huge honour it really is.”

When asked about who he looks to for inspiration and motivation within the sport Jack answered “I can recognise and admire when other fighters have a particular skill set but I don’t really look up to anyone within the sport as my inspiration because I’m not aspiring to be like anyone else. I’m more focused on being the best that I can be rather than trying to be like anyone else. Although I do have huge respect for my older brother Arann for really paving the way for a lot of up and coming fighters. He has done a great job as a head coach, he’s great for seeing the potential in people and showing them the right path to take to bring the best out of them. I’d also like to give thanks to all of my training partners and everyone involved in MMA Cork.”

While Jack is currently employed full time as an electrician, he hopes that one day he will be able to make a living through MMA claiming “The company I work for is absolutely fantastic in supporting me in my MMA career. They’re very understanding and willing to give me time off for fights but in an ideal situation I would love to be in a position to fight and coach full time. I want to keep going and fight the best people. Arann and I always joke that one day we’ll be that stereotypical old man sitting at the pub who claims he’s fought the best of the best and no one believes him, but we’ll know we did it. We’re in this for ourselves and the love of the sport, we don’t have any interest in the limelight that comes with it all. I just want to push myself and face the best fighters out there and hopefully that will lead me to a world title. For now I’m taking things one fight at a time before looking to the next challenge.”

When asked what advice he would give to an aspiring young fighter Jack answered “Don’t overcomplicate things. It’s very simple, all you have to do is show up. It doesn’t matter how talented you are, you can have all the talent in the world but it won’t mean a thing if you don’t consistently show up to training. It doesn’t matter who’s good, what matters is who’s left. Keep coming every day, whether it takes you months or years you will achieve your goals as long as you put the work in and don’t give up.”

Discussing the positive impacts that training in MMA have had on his life Jack revealed “Before I began training I thought I was okay, but it was only after I began training in MMA and jiu jitsu that I realised how much better I was capable of feeling. It gave me a huge confidence boost, first on the mats, learning that I could be capable of holding my own against tough opponents and secondly, once I became more comfortable and embraced the chaos that is MMA I found that I became more calm and relaxed in my personal life. Nowadays I’m a much more easy-going person than I used to be, there’s not much that can phase me.”

The Irish Mixed Martial Arts Association would like to extend our sincerest gratitude to Jack for his ongoing support and contributions to Irish MMA and would like to wish him the very best of luck and skill in his upcoming bout on Cage Warriors 117 in London and what will undoubtedly be a very prosperous professional career.