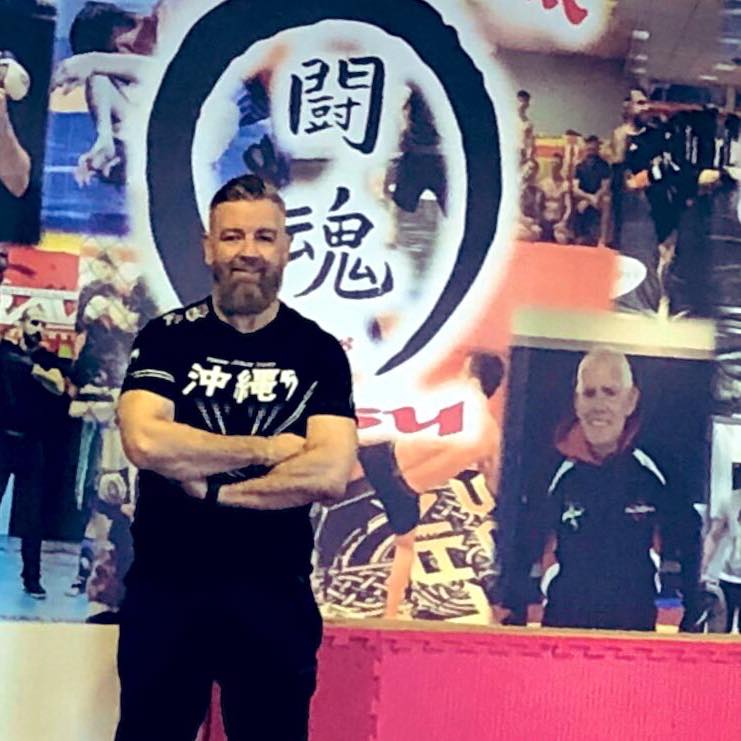 The Irish Mixed Martial Arts Association featured coach of the week is founder and chairman of the Ulster Amateur MMA Association, head coach of ZKJ dojo and winner of the Changing Lives Through MMA award at the 2018 IMMAF amateur MMA awards, Danny Corr.

Beginning his martial arts journey 40 years ago in 1980 Danny initially trained in traditional Wado-Ryu Karate under sensai Oliver Brunton in Belfast, he recalls “Martial arts classes back then were very different to what they are these days. You weren’t allowed to speak or scratch your nose during class. It was during the time of the troubles here in Belfast and I had to come into the town centre, which was like a ghost town back then, to attend the karate classes. Karate was virtually unheard of then and was very mysterious but it was something I had become addicted to. I competed Internationally in Karate and began coaching very early in my career, probably too early thinking back. In 1998 myself and a few set up our own organisation and began running clubs throughout Belfast. I then became involved in sport jiu jitsu which was very similar in style to MMA but wearing a gi.” Danny went on to coach the Irish Sport jiu jitsu team and won a 2 World Titles for Ireland at the world championships in Jersey and Las Vegas 2007 and 2010 in the same year that the Irish team won the world team title. Explaining how he became involved in MMA Danny claimed “One of my original students Rowan Prendiville, who had been training and competing with me since he was five years old came to me and said he’d like to give MMA a try, it wasn’t really regulated at all back then but that was how we began and it took off from there.”

Initially Danny became involved in the governing of MMA when he, Andy Ryan, Peter Lavery and John Kavanagh originally established the Mixed Martial Arts Federation Ireland which tried to regulate the sport all over the country and held national championships and team events alongside promotions such as Battlezone and Clan Wars to decide which contestants would be eligible to compete at the world championships. He stated “Not a lot of people know that the first team we sent to the IMMAF World MMA championships 2014 was a united Irish team made up of fighters from both North and South, where Aaron Wallace won bronze. Unfortunately the governing two jurisdictions with different governments and rule sets at the time just wasn’t workable so we made the choice to disband the all Ireland federation in favour of making separate associations for the Republic and the North which was when we created the Ulster Mixed Martial Arts Association.”

Identifying the highlights of his martial arts journey to date Danny stated “In my own personal achievements I would have to say that being inducted into the Belfast Hall of Fame alongside George Best was a huge highlight for me but winning the world title at 40 years of age was a huge also a personal achievement for me. Also helping set up Ulster MMA is something I am very proud off. Opening up opportunities for people to travel abroad for competitions in particular. To be able to attend and watch the progression of IMMAF over the years; to see it evolve into such a hugely successful federation with over 120 nations coming together has been fantastic. When we joined there were only 12-15 countries. The world championships in Bahrain especially are an incredible to experience.”

Discussing the greatest obstacles he has faced throughout his involvement in MMA Danny said “It’s been tough at times campaigning for the recognition of MMA. I am very proud that there is not a coach in this country I haven’t helped willingly, even though sometimes it’s thankless. Sometimes it’s been difficult to try and get people away to events in particular but I guarantee you I personally have asked and tried to help every interested coach who had fighters they wanted to attend at Championship, without prejudice, but sometimes that again is unseen.  Unfortunately not everyone wants the sport to succeed and there have been ups and downs along the way. Probably the toughest time to get through was the very tragic death of Joao Carvalho. We were inundated with the press wanting interviews and trying to make stories out of it. At the time the government wanted to completely shut all MMA events down. A lot of people don’t really understand the amount of work that went on at that time just to keep MMA from being wiped away, we put all our own time and money into making sure certain aspects of government didn’t follow up on closing MMA. People would not believe how real that threat was at the time. There’s a lot of meetings with government officials and trying to make them understand the sport better because many people’s opinions of MMA are drawn from what they’ve read in the headlines. We weren’t sure the sport could continue at that time but fortunately, after implementing new guidelines and a lot of hard work we came to a stage where the government in Northern Ireland has seen our efforts and is now very supportive of the sport.” The Minister for Communities in the North Caral Ni Chuilin has recently given her full backing to the sport and its benefits, but this took years to prove and evidence.”

As an avid martial arts enthusiast Danny has worked tirelessly to make martial arts classes more accessible to young people in the hopes of improving their lives and futures. In 2014 he became involved with the Fight For Peace programme, based in Rio De Janeiro which is a global organisation committed to improving the lives of youths in areas heavily affected by crime and violence. Inspired by what he witnessed there Danny said “They do fantastic work to improve the lives of young people who have been caught up in gangs and drugs. They get them off the streets and give them an education through martial arts that will stand to them. When I got back I thought that we could really do with something similar over here. All of the teenagers that train in my gym train completely free of charge so there are no costs associated with it. We also have a maths and English educational programme available for anyone who needs it. We provide Tutors for their study so anyone who may have left school at a young age before sitting their exams can still receive an education and we also have a coaching course certification. Last year alone we had 20 young people complete their maths and English GCSE’s through MMA with us.” Danny is also chairman of the IMMAF Peace Through MMA programme and developed the Fight to Unite youth project in Northern Ireland and in 2018 he was awarded the IMMAF Changing lives through MMA award for his generous contributions to society.

Speaking of the future Danny said “ Covid has given me a lot of time to regroup and move forward with IMMAF and where I believe Amateur MMA on the Island of Ireland needs to be and that is fully supported by both governments to ensure we are a legit sport with access to support both financial and governance that other mainstreams sports can avail of.

I have put 7 years of my life into Ulster MMA and now it’s time for me to move to next level and try and achieve the ultimate goal of full recognition with the support of IMMAF. In the future it will be possible to put forward an all-Ireland tournament style competition for our competitors where they can gain much more experience than one fight on a show a couple of times a year. It would be great to grow our pathways programme further to include areas in the republic. We’re currently looking into running a youth programme in Drogheda and if we can get the go ahead on that then hopefully we can begin to expand it into every gym in every area throughout Ireland North and South.”

The Irish Mixed Martial Arts Association are extremely grateful to Danny for the enormous contributions he has made towards improving lives through MMA and for his ongoing support and help in the battle to achieve formal recognition for MMA as a sport. We wish Danny and all of his members the very best of skill and luck and we look forward to working closely with them in the future.