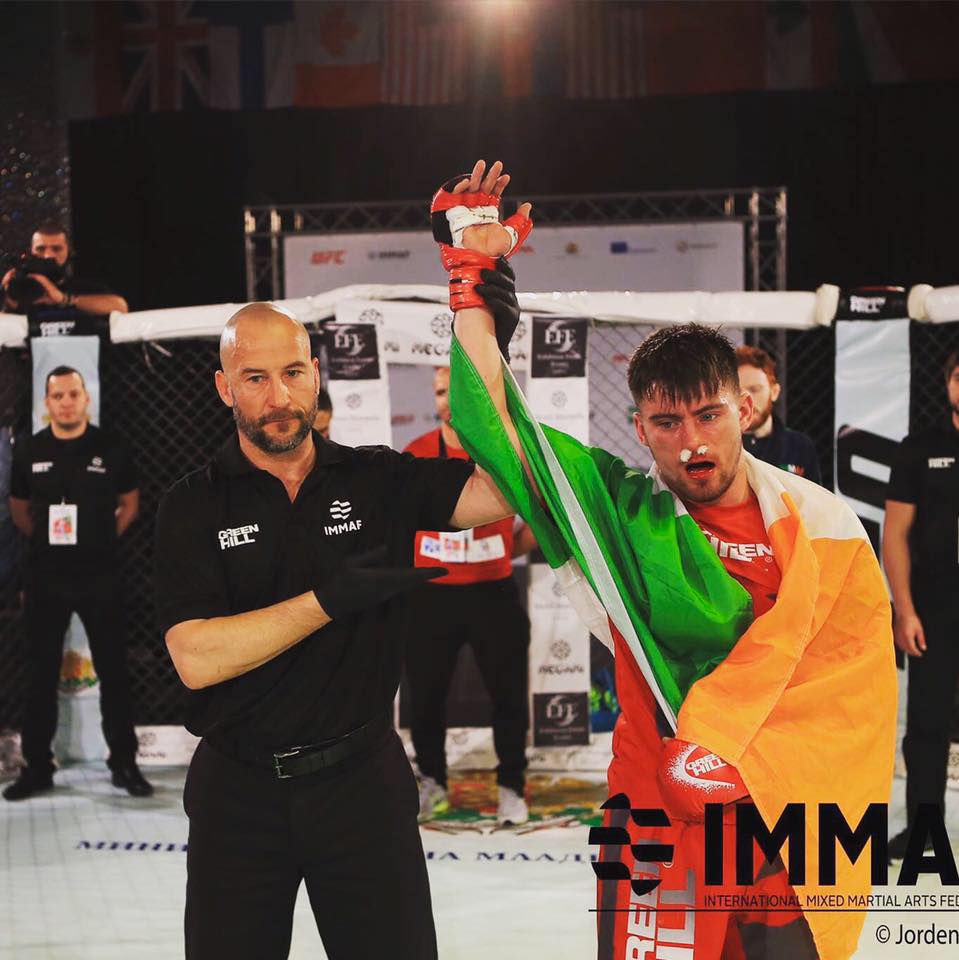 Scotts introduction to MMA began 9 years ago at the age of 18, he explains “Owen Roddy is my second cousin so I always had an interest and an appreciation of combat sports knowing that there was a fighter in the family. When Owen first opened his gym it was called Primal MMA at the time and it was only about ten minutes away from my house. A friend of mine was looking for a way to lose weight so he asked me to try out the new gym with him. He stuck with it for a while but ended up quitting when his work schedule got busy, but I fell in love with the sport straight away and have been like a piece of the furniture in the gym ever since. When I first joined I had done some weightlifting and was in reasonably good shape, I came in with a bit of an ego and I thought it was going to be a lot easier than it was. After the first few months when I began to roll with legitimate and experienced fighters I was getting absolutely destroyed and that’s when I started to realise that this is much harder and more technical than it looks on TV. I took to the grappling side of things a lot quicker because I hated getting punched in the face. Owen is a stickler for fighter safety so it was all very controlled but getting punched without turning my face away was something that took time to get used to. I won the under 70kgs national MMA leagues which used to run as multiple events over the course of a year. After winning my weight division I started to feel like I was getting really good at this. Then I went to the competitive sparring classes at my gym that same day and got absolutely smashed. MMA is one of those sports that has this knock down and build up effect where no matter how well you think you’re doing there’s always someone better than you to keep you in check. You need to accept those little knock backs you’ll hit along the way and learn how to build up from them.”

Scott made his amateur debut un UXC fight promotion in Northern Ireland in August of 2014 and fought on Battlezone FC in June of 2015 before being selected to represent Ireland at the 2017 IMMAF European Open MMA Championships in Bulgaria. Explaining the importance of the IMMAFs he stated “If I could go back in time and do anything differently I would have gone back to the IMMAF’s again. I kept thinking about it but then a fight opportunity would come up so I’d take that instead and most of the time that fight would end up getting pulled so it was frustrating to know that I could have gone back to the IMMAFs and had guaranteed fights there. I spend a lot of my time coaching now and I’m always telling the guys I train to make sure they try to get onto the Irish team to go to the IMMAFs. It’s an invaluable opportunity to get 6 months to a year’s worth of fighting experience within one week and you’re guaranteed a fight even if your original opponent pulls out. It’s not your day to day competition that you’d meet at a local show. These are the best amateur fighters in the world and some of them are training like pro’s already. Everything at the IMMAFs is done to the highest standard, even the production of the event, it’s the closest thing we have to the Olympics for MMA. Representing Ireland abroad meant the world to me, especially because I was born in England, and even though both of my parents are Irish people would always take the piss out of me, calling me an Englishman, but Ireland is my home, period. There’s not many people out there who can truly say that they have represented their country at such a high level so to have accomplished that is something I’m very proud to have done. I’ve seen so many of my teammates in the gym achieve such great things through the opportunities that being a part of IMMAA and IMMAF has given them.”

When asked to recall what his greatest highlight in MMA has been to date Scott replied “Funnily enough I wouldn’t consider my own wins to be my highlights, I think the best part for me is getting to see my teammates win their fights. Obviously I’ve enjoyed my own fights and wins but I get more nervous when my friends are fighting than they are, because the situation is entirely out of my control. Don’t get me wrong it’s amazing when I see my teammates winning world titles and fights on big shows in the 3 arena but the biggest moments for me have been when the young lads that I’ve helped to coach and been a part of their progress for a year or so fight, and they win using something that we’ve been working on. I love those moments and it feels like an accomplishment for me too even though they’ve done the work I know that I’ve helped them and been a part of it.”

Speaking of the obstacles he has had to overcome throughout his journey Scott stated “I’ve had my fair share of injuries along the way. I’ve slipped a disk and pinched a nerve but those were caused from being a bit careless and not looking after myself, but I’ve never had anything serious happen during a fight or training session, which is surprising to some considering the nature of the sport. ”

Speaking of the people who inspire and motivate him Scott claimed “. When I see Leah McCourt and many other Irish fighters around the country like Rhys McKee and Brian Moore fighting at such a high level it shows me where I want to be down the line but there’s plenty of other people outside of the high profile fighters that inspire me. I’m inspired by each and every person I train with and who is putting their time and efforts into helping me reach my goals. Owen is an unbelievable coach, the man is a genius. I don’t think people realise just how good he truly is. I coach a jiu jitsu class at 6:30am three days per week and the people who come to those classes have become some of my main training partners. I work a full time job on top of coaching and fighting so I don’t have the opportunity to train at the prime time hours so most of my training is done at those early morning sessions so I’m very grateful to all those people who are showing up consistently and putting the work in with me. I’ve been very fortunate with my job too as they’ve always been super accommodating and understanding anytime I’ve needed time off for fights or been off form due to cutting weight so a big shout out to the people I work with at Solartricity.”

When asked about the lessons he has learned through his training Scott replied “I need to care less about losing, Yes winning is amazing but the lessons learned in every fight, win or lose are completely invaluable. My advice to anyone would be don’t worry about it, if you lose, you lose – it’s no big deal. You’ll gain experience regardless of the outcome so get out there, put yourself to the test and give it a shot. Say yes to every opportunity, jump straight in and don’t worry about the result, focus on the bigger picture. MMA taught me how to take care of myself, and I think that’s something that not a lot of people really know how to do, I don’t just mean from an exercise point of view but how to choose the right sources of nutrition to make my body perform at its best and from a psychological point of view too. There’s not many sports out there that can play with your emotions as much as MMA can. This sport gives the highest of highs but the lowest of lows too and learning how to deal with those is part of the process. Especially during the lockdowns I know a lot of people have been struggling with their mental health. I’m very lucky that I’ve never suffered from any mental health issues and I genuinely believe that that is largely down to the mindset I have gained through my training. I think coaching especially has helped me to grow as a person. It gives me a sense of responsibility and I feel very fortunate to have the opportunity to be a part of someone elses journey.”

Explaining how he managed to keep his fitness levels up during lockdown Scott said “I was doing anything I could to keep my mind and body occupied. One day I did 26miles, the equivalent of a marathon on the assault bike. My friend and I did the David Goggins challenge to run 4 miles every 4 hours for 48 hours. I had some home gym equipment so I used those most days and Leah McCourt and I did a bulgarian bag 10,000 rep challenge via zoom for charity where you do 2,000 reps comprising 10 different exercises every day for 5 days straight. That challenge was absolute hell, we really had no idea what we were getting ourselves into with that one. I remember the first day we did it, it took us 1&½ hours to get through the first workout and I honestly couldn’t lift my arms for the rest of the day. But we got through it and Leah managed to raise over £1,000 for Christian aid.”

Revealing his plans for the future Scott claimed “I want to make my pro debut in early 2021 if possible. It’s something Owen and I have been discussing for a while now and it’s just been a question of when to pull the trigger on it. I love fighting and I want to fight but that’s not necessarily my end goal. I love coaching as well and my goal is to be able to make a living through MMA, whether it be as a fighter, coach, gym owner or another role. That’s another great thing about the sport there’s lots of opportunities available other than fighting like coaching or being a cutman, judge or referee and still be actively involved in the sport.”

The Irish Mixed Martial Arts Association would like to thank Scott for his ongoing support and contributions to Irish MMA and wish him the very best of luck and skill in his plans to progress to the professional ranks.