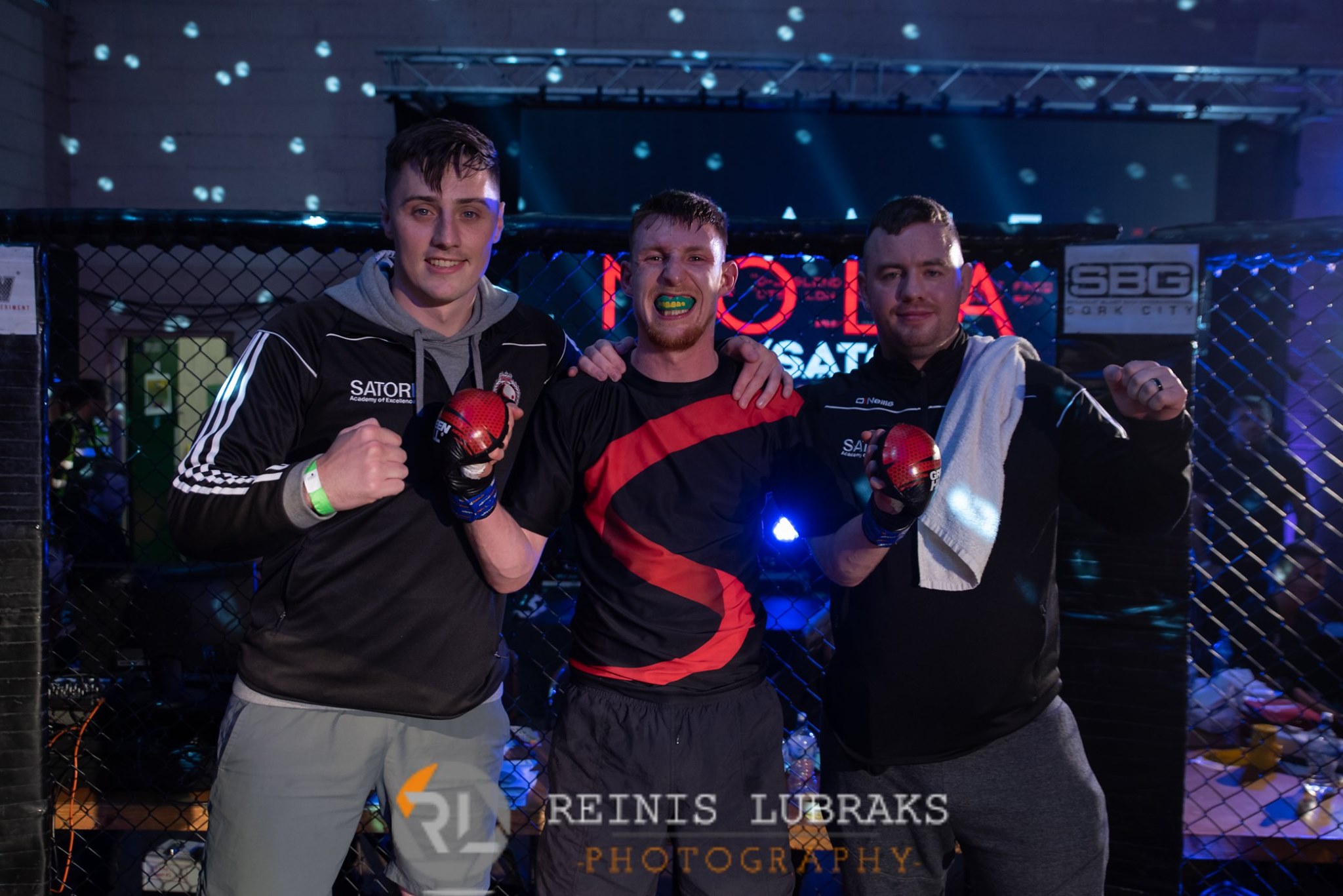 Jamie was first introduced to martial arts at the age of seven when he enrolled in shotokan karate classes until the age of ten. He then went on to train in other sports such as GAA, soccer and rugby but always held a keen interest in combat sports. “I always loved wrestling. Me and my grandma used to watch WWF with all the legends like stone cold Steve Austin, The Rock and the Undertaker. When I was around 14 I came across a youtube video of Mirko Cro Cop, who’s a specialist in head kick knockouts and seeing him KOing people left right and centre really caught my attention. Then a gym opened up across the road from where my dad works called MIA, Martial Arts Incorporated run by head coach Keith Quinn which worked out perfectly because my dad could drop me to training before he started work. I loved it there straight away, even though I hadn’t a clue what I was doing, all I knew was that I wanted to learn more. it really drew the competitive nature out of me and made me more focused. We had a nice gang of lads there, all around the same age and we all spurred each other on to work harder and do better every day. I started out competing in points style fighting and then went on to compete in randori jiu jitsu which was similar to MMA except no strikes were allowed on the ground. I had done some submission grappling before but very little jiu jitsu and ended up winning one of my fights by triangle choke without even knowing what a triangle choke was at the time. Unfortunately that gym had to close down but thankfully everyone from that gym went on to have their own success in many different ways.”

“At 18 years old I went down the wrong path for a while, started to get into a bit of trouble and found myself in my fair share of street fights, which is something I regret but learned a lot from. Even when I stopped training I never lost my interest in combat sports, I still watched all of the UFC shows and kept telling myself that I was going to get back into it. My dream was to become a UFC champion. Then when I was around 23 I started training in a nearby weightlifting gym and a martial arts gym named Satori was renting the space above the gym I was training in. Every time I was there I kept trying to build up the courage to walk up to Satori and ask to train but I kept bottling it at the last second until one day my friend struck up a conversation with Patrick, one of the owners of Satori. He told us they were training in jiu jitsu and offered us to join in with a class and I jumped at the opportunity straight away. From there on I was hooked once again, and more dedicated than ever before. I had only been training for two weeks when Patrick, and our head coach John held the Dublin open jiu jitsu competition. As soon as I heard about it I went straight upto John and asked him if I could compete, I was thirsty for fair competition and never lost my competitive nature. John advised me that I’d be better off waiting for a couple of months for the next one so I kept on training four or five days a week until I could get back competing. Satori was a very jiu jitsu oriented gym back then, there was the odd striking or MMA class but nothing consistent. Conor McGregor’s success was really spurring me on more than ever to get into MMA. I bumped into an old friend Eoghan Bradshaw who I used to train with at MIA and I managed to convince him to join Satori. There was a punching bag at the gym so Eoghan, Kyle Patton and I would come in early before class started to do some striking and MMA training. My first proper MMA fights were at a novice competition at SBG Portarlington in 2018 and another tournament at SBG Cork soon after.”

Jamie made his amateur debut on Cage Warriors at The Devenish Complex in Belfast in February of 2019 which he won via triangle choke 32 seconds into the first round and went on to have six more fights in the following eight months including representing Team Ireland at the IMMAF European MMA championships in Rome. He recalls “I jumped at the opportunity to represent Ireland, it was something I had always wanted to do and I couldn’t believe my luck that the opportunity came so soon into my fight career. I had a fight booked for the week before we were due to fly out and lots of people were telling me to cancel the fight and just focus on the IMMAF’s but I just wanted to get in as many fights as possible, there was no way I was pulling out of one. I had every intention of fighting on the show, flying out to Rome, having five or six fights there and taking home a gold medal to Ireland so I was preparing myself both mentally and physically to fight upto seven times in less than two weeks. Unfortunately that’s not what ended up happening, I won my first fight of the IMMAFs against a much more experienced opponent but lost the second against a Bulgarian wrestler by decision even though I broke his jaw during the fight.”

Further discussing his experiences at the IMMAF European MMA championships Jamie claimed. “It was a surreal experience, the IMMAFs are the very highest level of amateur MMA in the world so I got to know a lot of the other Irish fighters really well, especially the Team Ryano and SBG Cork lads. It really showed me what a great community of people we have in MMA, even though we get in the cage and try to knock each other out it’s nothing personal, we’ll still shake hands and have a pint together after and all the fighters and coaches I’ve met along the way have always offered for me to come down and train with them when I’m in their neck of the woods and we offer the same. It was an honour and a privilege to represent  my country. I still wear my Team Ireland tracksuit all the time and I kept the same Irish flag that was draped around my shoulders in Rome, blood spatters and all.”

After an action packed 2019 Jamie had big plans to add to his amateur record and progress to the professional ranks until the Covid 19 pandemic struck and caused almost all combat events and gyms in the country to cancel their events and training sessions.

When asked what he considers to be the highlight of his MMA career to date Jamie answered “I believe that the highlight of my career hasn’t happened yet, I have a lot further to go in this game but I’ve had some incredible opportunities along the way. Fighting at the IMMAFs was definitely up there but we have some great shows in Ireland too like Clan Wars, Cage Legacy, Excel and I hear the Fares brothers are starting a new promotion now too. When this whole Covid situation goes away MMA in Ireland is going to explode like never before.”

Discussing the obstacles he has faced throughout his journey he explained “My biggest obstacle was myself, at times I was in my own way. The lack of confidence and self discipline. It’s too easy to claim that you don’t have the time to train, but you’ve got to make the time. Before the lockdowns I was working 40 hour weeks on a building site and still making the time to train 18 hours per week on top of it. Life will always throw you curveballs but if you want something enough you’ve got to make it happen.”

Expressing the ways in which martial arts has benefitted his life Jamie stated “Progressing up the ranks in terms of stripes and belts was a big thing for me, it gave me something to focus on and a reason to keep myself on the right path and out of trouble. Jiu jitsu saved me, 100%. I had dropped out of college and was bouncing around from job to job at the time but jiu jitsu was the most consistent thing in my life, it helped me transform into the person that I wanted to be.”

Speaking of what inspires and motivates him Jamie claimed “I’m an intensely motivated person myself but the support of the people around me really pushed me on, especially my coaches and teammates. As I mentioned I went down the wrong path when I was younger and was going through some dark times when I joined Satori. Patrick Sheridan was the man who first reached out his hand to pull me out of the darkness and introduce me to the sport that would turn my life around. John Sheridan has shared his vast knowledge on the fight game with me and made me the fighter and person I am today. Keith Quinn, my original kickboxing trainer and all the old team at MIA. Stevie Collins Jr, the Satori boxing coach who taught me head movement and Alan Dunne of Peak Physiques who introduced me to sport specific personal training for optimising performance and he brought my strength and conditioning to the next level and made me really believe in myself. I am so appreciative to my mother Caroline, father David and sisters Nicole and Chloe for their unwavering support. My girlfriend Erika has been a great support through everything too, pushing me on on the days when I didn’t feel like training and putting up with my complaining when I was cutting weight, or sore and tired. I never understood when people talk about their haters, because as far as I’m concerned I’ve never had any haters, and if I have then I’ve never paid them any attention. I think when you focus on all the positivity and support surrounding you then the negativity fades into the background.”

Describing the advice he would give to anyone thinking of getting into MMA Jamie stated “Don’t doubt yourself. Doubt will destroy any of your dreams as long as you let it. If you’re going to try something then you might as well put your best foot forward by believing you can do it. And anytime you’re finishing an armbar, do yourself a favour and hook their leg. That’s a lesson I had to learn the hard way after my opponent stacked me and smashed me down on my head, knocking me out cold in a novice tournament once.”

Revealing his plans for the future “I’d like to get over to Thailand and get some good muay thai fights over there. I’m definitely going to go pro in MMA. I can’t wait to be able to throw elbows and knees to the head and put myself up against the best to test if I’m able to put myself in the position to be able to dominate fights at the highest level. When the timing and the opportunity come together, that’s when you’ll see me progress to the professional ranks.”

The Irish Mixed Martial Arts Association would like to wish Jamie the very best of skill and luck as he continues to excel and progress in his MMA career and we extend our sincerest gratitude to Jamie and his coaches and teammates at Satori MMA for their ongoing support and contributions to Irish MMA.