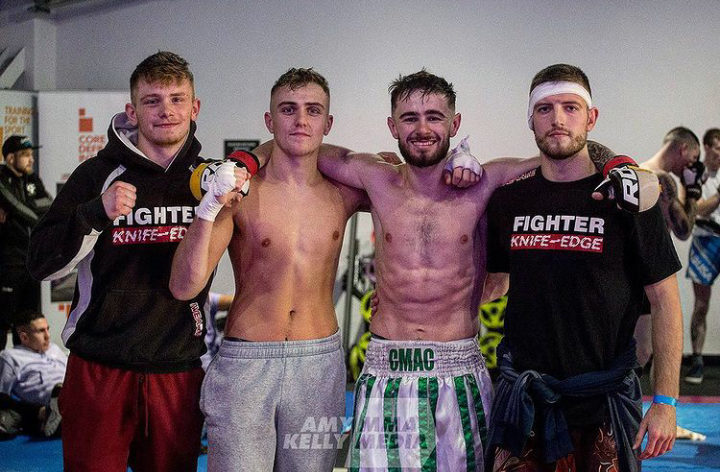 Jordans reason for enrolling in martial arts stemmed from a need for self defence skills after becoming the target of an unprovoked attack at 16 years old. He recalls “I was walking home when I got jumped by a few people and it made me realise the importance of being able to defend myself. A friend of mine had been training at CMAC so I asked him if I could come along to a few classes. I joined the beginners group and fell in love with the sport straight away. Even though I was embarrassed that I didn’t know a thing and couldn’t even throw a straight punch I focused on just improving one small thing at a time and became addicted. I was big into football up until that time but I left all that behind me to focus on MMA. I couldn’t get enough of it, I was totally addicted. It was a place where I could just focus on fighting, and not worry about any other distractions going on in my life. It was almost therapeutic to be able to get rid of any pent up emotions in a controlled way with your mates.”

After taking part in a few K1 fights and competing in some novice MMA tournaments Jordan made his amateur MMA debut in March of 2016 on Ryoshin Fighting Championships in Dublin which he won via unanimous decision. The following year he added another win to his record on Cage Legacy MMA via a third round TKO before being selected to represent Ireland at the 2018 IMMAF European MMA Championships where he was awarded a bronze medal.

Discussing the highs and lows that come with the sport Jordan claimed “Going to the IMMAFs was definitely the greatest experience of my career so far, especially winning my first fight of the tournament by a 13 second armbar. I was the first person from Team Ireland to fight so to pull off a 13 second victory was probably the single best moment of my life. Another highlight of mine could also be considered a setback that turned out to be a blessing in disguise. I tore the meniscus in my knee and had to take nearly two years off fighting to recover. Getting injured allowed me to view the sport from a different perspective and taught me a lot about MMA. The general school of thought in MMA tends to be work on cardio first, defence second and then offense, whereas I was already an offensive fighter and taking that step back made me reevaluate my approach to my training and made me a better and more well-rounded fighter in the long run.”

Explaining the experience of competing at the IMMAFs Jordan claimed “It gives you a real taste of what the professional circuit will be like. To travel across the world, compete under the spotlight, be watched by everyone and to represent not only yourself, but your country – it’s a feeling like no other. It was an unbelievable experience, I’d relive it every day of my life if I could. I was planning to compete in the IMMAFs again this year but those plans obviously had to be put on hold once the whole covid situation hit. To have the opportunity to represent my country at such a high level, against some of the best amateur fighters in the world is an achievement that I feel truly blessed to have been a part of. Even walking through the airports wearing a Team Ireland tracksuit is a remarkable feeling that I can’t even describe.”

When asked who he looked to for inspiration within the sport Jordan answered “There’s only ever been one fighter that I ever really looked up to and admired, and that’s Alexander O’ Sullivan. He’s easily the most experienced amateur fighter in the country and has medalled at each of the four IMMAF tournaments he’s been to. He has fought people of every age, size, experience level, nationality and background. He’s taken fights on 2 days notice, made it through seriously tough weight cuts while studying in Trinity college and still manages to find the time to help us all out with whatever we need. Even if he has an exam coming up or an assignment due he’ll always make time to hold pads or get a few rolls in with us. He’s the most selfless person I’ve ever met. All of us at the gym look up to Alex, and we all know the position he’s in as a fighter and what he’s capable of achieving. He’s an absolute credit to Debbie and Deano (Alexander’s parents). Deano’s another man who’s done wonders for me. If it wasn’t for Deano I wouldn’t be the man I am today. Before I joined CMAC, I was just a wimpy little kid who was afraid of his own shadow. I was insecure, shy and afraid to open my mouth to anyone. Deano helped me to grow as a person, to get rid of my insecurities and become the person I always wanted to be. Debbie is an absolute robot, in the best way possible. I’ve never met someone who can keep up with her fitness levels, she’s incredible. She works in a school during the day, she has her family to look after and still never misses a training session. She pushes us all to our limits and we all struggle to keep up with her. She’s a seasoned fighter, she’s represented Ireland at the first ever IMMAF MMA World Championships, she’s an IMMAF cutwoman and she’s an expert when it comes to taking care of any injuries. To have these three legends of the sport behind me, training me every day and pushing me to be the best that I can be is something I’ll always be grateful for.”

Speaking of the biggest lessons he has learned throughout his martial arts journey Jordan explained “I’d love to go back in time and tell my younger self that there is always some good to be found in the bad, no matter how bad it gets. If you get knocked out, if you lose a fight or a tournament, miss out on an opportunity or make a mistake it’s not the end of the world and you can always come back from it no matter what. Nomatter how bad a situation gets, it will always get better and instead of being afraid of nerves embrace them. Nothing worth having comes easy and overcoming nerves is a big part of that process. I’m a big believer in the law of attraction and what you seek, seeks you.”

Explaining the benefits that MMA had had on his life Jordan claimed “The biggest one would definitely be knowing that I’m more confident in my everyday life but knowing that I’m respected because not everyone can make that walk into the cage. To walk along the street with my head held high knowing that I’m capable of defending myself if I ever need to is invaluable. Before I started MMA I used to be so wary of what people would think of me, what clothes I was wearing or if my hair looked okay, whereas now I don’t care about any of that. I care about being successful, reaching my potential and being the best that I can be.”

Addressing his plans for the future Jordan stated “The end goal is to make sure the whole world knows who I am both inside and outside of the cage, and that primarily involves becoming a world champion but I’m in no rush to turn professional. I want my first world championship medal to be at IMMAF. I see a lot of fighters lately turning pro with only four or five amateur fights behind them and I understand that they’re eager to make a name for themselves and earn some money but I want to get as much experience behind me as I can first. There’s no point rushing into pro and losing, or only accepting easy fights to pad a record. When the time comes to turn pro I want to go in there fully prepared, fully bulletproof physically and mentally. I’m not afraid to put the hard work in and I know I’ll get there in time. I want to do it all on my own merit, stay away from the drama side of the game and become a person that kids can look upto as a role model.”

Since the closure of gyms due to the level 5 lockdown restrictions many athletes have found it difficult to stay in shape but Jordan claims “You either want it enough to work  for it or you don’t. Me and my teammates have been getting out and putting the work in the whole time. I feel like we all are ready for anyone and anything. I’ve always enjoyed running since I was a kid, but I’m running marathon distances now so the lockdown has actually benefited me for cardio especially. Even though I wish we could come out of lockdown and get back to normal now, I’m also glad that it happened in a way because it made us all appreciate it that bit more and having come through it I feel more ready than ever.”

The Irish Mixed Martial Arts Association would like to sincerely thank Jordan for all of his support and contributions towards the progression of Irish MMA. We wish him and all of his teammates at CMAC the very best of luck and skill in their training and look forward to seeing them compete again in the near future.