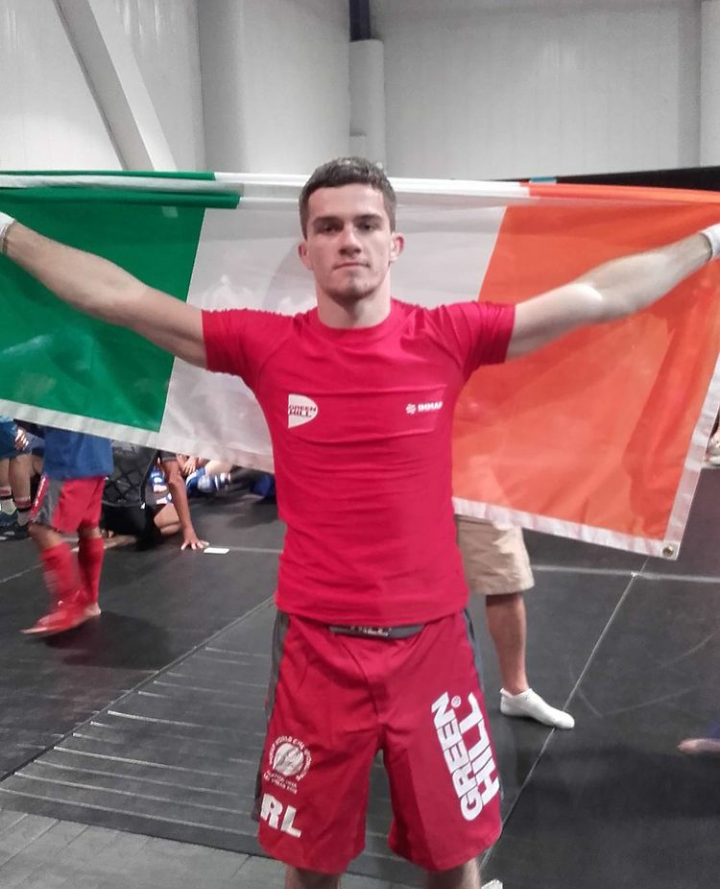 Nathan began his journey into martial arts at age 16 at Informed Performance Gym (now Kyuzo) under Head Coach Barry Oglesby. He recalls “I was always interested in MMA as a sport and I used to play the UFC games on the playstation and I was really impressed by the jiu jitsu, wrestling and grappling side of the game and I thought to myself ‘Why not try it in real life?’ So I joined Kyuzo and fell in love with the sport straight away, I don’t know where I’d be now without it.”

Nathans competitive MMA career began in 2014 when he won his amateur debut fight in Belfast via triangle choke. He went on to compete on five separate occasions in the following two years before being selected to represent Ireland at the 2016 IMMAF World Championships in Las Vegas where he earned a silver medal for team Ireland after fighting five times within a six day period. In the Summer of 2020 he made the decision to join SBGI, explaining “My coach Barry retired from the MMA scene a few years back and that made me take a step back from MMA too but when I earned my Blackbelt in jiu jitsu it reignited the fire in me and I decided it was time to get back into MMA so I joined SBG to train MMA there but continued to train in jiu jitsu at Kyuzo.”

Discussing the greatest highlights of his career to date Nathan claimed “I’ve had a few, the first one was my fight against Ian Cleary. I was 18 at the time, he was around thirty and had a lot more experience in the cage than I did. That was my first amateur title fight and I won it. It was a great feeling of success so that still stands out to me as a very good experience to look back on. Another big highlight would have to be my trip to Vegas with the Irish squad. Obviously I’m very proud to have won a silver medal, but the whole experience was unreal, even though I was too young to drink or gamble at the time it was a great thing to be a part of. It made me feel really proud of myself to be representing my country at such a high level. The area I’m from is classed as a disadvantaged area where a lot of young people go down the wrong paths so I started to see myself as a sort of a positive light. I wanted to set an example for people who wanted to follow the same route or needed the inspiration to believe in themselves. The IMMAF’s helped prepare me for the professional game. There’s something very real about the tournament. Before the fight you stand shoulder to shoulder with your opponent backstage. There’s no entrance music or big hype, just two athletes ready to prove themselves on a world class stage. It’s a great way to gain experience, to get in and fight without needing to worry about all the drama that comes along with it. When you’re not there to impress anyone or entertain a crowd it frees you up to focus on the fight itself. I felt that I improved more and more as the days went on because I was becoming a more experienced and confident fighter with each fight. A more recent highlight would be when I fought in the 3 arena on Bamma. That blew me away to be able to fight in such a huge arena and crowd at such a young age. It was overwhelming at first but once I experienced the whole atmosphere and buzz from the crowd it cemented my ambition even further.”

Speaking of the fighters that he looked to for inspiration within the sport Nathan stated “I was always a big fan of Georges St Pierre. He was someone I really looked up to and admired because his whole game was just so refined that a lot of people had a very hard time stopping him. Like any champion he had his losses but when he came back, he came back with such a dominant run that you can’t help but respect him. I liked Jon Jones as well in terms of his fighting style and game plan. Even now he’s probably still the pound for pound greatest of all time. Obviously you have the likes of Conor [McGregor] then who has shone a light on Irish fighters and gave people the self belief that someone from such a small Island can do such great things. Even though we’re a small country with only 5 million people we can still achieve greatness with the right attitude and approach.”

Expressing his gratitude for the people who have guided him throughout his journey Nathan claimed “My old coach Barry was like a dad to me. He led me in the right direction and if it wasn’t for him I wouldn’t be where I am right now. He put his trust in me and I put my trust in him. Even though we were a small club and I had only a few training partners he was still able to bring me to the level where I achieved three amateur titles and a silver medal at the IMMAFs. For a small club we achieved great things together so he’s someone I hold a very high regard for. I have to thank every single person who I’ve trained with on the mats throughout my whole journey leading up to now. Them testing me and giving me new problems to work out and solve made me the fighter I am today. Now that I’m in SBG training under John Kavanagh and Dave Roche I have some really great sparring partners to test myself against, and I’d like to give Richie Smullen a shoutout here. I view him as our team captain in a way. He’s always on the mats, giving help and advice and he’s always there when you need him. He plays a big role in the club and he deserves credit for being such a great leader. Since I’ve joined SBG I’ve progressed a lot and in a quick time and I’m very hopeful for the future with the coaches and teammates around me.”

When asked about the ways in which MMA has benefitted his life Nathan answered “Growing up in an area like Finglas, labelled as disadvantaged you see a lot of bad situations. I’ve experienced a lot of problems in my own personal life and I always needed something to escape from reality, and that’s what MMA gave me. It was a positive outlet to focus my energy on and in doing so I built character and confidence. Being the youngest on the mats in a team of people older than me who were goal orientated and ambitious helped me grow from a boy to man. I worked hard every day to achieve my goals and became someone I could be proud of. MMA saved me from going down the route of becoming a waster, getting involved with the wrong people or having a toxic outlook on life. I’m very grateful that this sport gave me the opportunity to see the positive things in life, especially during times like we’re experiencing at the moment where there’s a lot of negativity and people are facing difficulties. I’m very lucky to still have my escape to turn to to help me disconnect from the unfortunate reality that we’re all living in.”

Revealing his plans for the future Nathan claimed “I’m in fight camp at the moment, seven weeks out from my next fight so in terms of short term goals I just want to be able to fight consistently over the rest of the year. Staying active and getting another two or three fights before the end of the year would be ideal. I’m still working a full time job at the moment so my long term goal would be to rack up enough wins to sign for a well established promotion and be able to make a living from fighting. That’s the goal I’ve always had since discovering the sport, to be able to comfortably live and support my family through MMA. The more obvious goal then is to become a champion of my weight division. I believe that with the right approach and mindset you can achieve anything so that’s definitely the top goal for me.”

When questioned about how he has dealt with the restrictions imposed during the Covid-19 pandemic Nathan revealed “I’ve been doing plenty of running. Getting up in the mornings, starting my day with a run, coming home to have something to eat and getting a weight session in in the evenings. As a professional athlete who has represented my country internationally I’m still able to train under the level 5 restrictions so I’m keeping on top of my training as much as I can and with a full time job as well I’ve been kept very busy thankfully. I think once the lockdown restrictions are lifted, it will be the perfect time for people to reevaluate their daily lives and set goals for themselves, regardless of how big or small those goals are to work towards bettering themselves. Even basic exercise like walking can do a lot for the mind and people should be focused on looking after both their mental and physical health. Speaking out when they need help and not being such a closed book will help everyone to become more resilient and able to overcome these difficult times. Personally I have suffered from mental health problems in the past and making those small adjustments, cutting out negativity and taking steps in the right direction really helped to pull me out of that hole that I was in and get me to where I am now.”

The Irish Mixed Martial Arts Association would like to sincerely thank Nathan for his ongoing support and contributions to the Irish MMA community, and wish him and wish him the very best of luck and skill as he continues to climb through the professional ranks and work hard to achieve his goals.