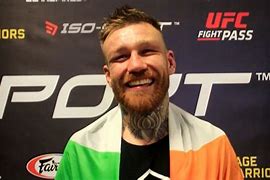 Philip was first introduced to MMA at 18 years old when his fathers friend brought him to try out a class at SBGI, he recalls “I was quite overweight as a child, I never really excelled at team or field sports. I had watched the UFC on TV, and thought it was something I might be good at. I used to call it cage fighting and my ambition from day one was to make it to the UFC. Walking into the gym for the first time I started to get a bit anxious and nervous, but I started to relax after I experienced the family vibe of the gym and saw that everyone was looking out for each other. It wasn’t just a bunch of people trying to knock each other’s heads off, it was about learning new skills and learning how to control yourself in the process. Since day one I’ve trained under John Kavanagh with the original crew like Conor McGregor and Cathal Pendred, and I’ve never looked back since.”

Speaking of what led him to open SBG Portarlington Philip claimed “I was training flat out, but there was no real pathway for fighters at the time or many opportunities for amateur fighters, I only had one amateur fight before turning pro. I realised that the only sports available for young people in my hometown of Portarlington were field sports, and I wanted to provide people with the opportunities that I had to travel to get. I had devoted my life to MMA ever since I started the sport and it was a dream of mine to open up my own club. With the help of my wife and our family we opened SBG Portarlington in 2017. I found the transition from fighter to coach to be surprisingly difficult. I had never really thought about how to coach or explain techniques to other people. I knew how to do the techniques, but I had to learn how to break it down and explain it step by step for beginners. Getting to see the transformations of our students at SBG Portarlington has been the best part of my whole MMA journey to be honest. Being able to see the ways people have transformed their lives, both kids and adults who came through the door struggling with weight problems or anxiety issues and watching them better themselves and become fitter and more confident. It was something that hadn’t even crossed my mind before we opened the gym, I was more focused on producing champion fighters but the real highlight has been watching people, the kids especially transform into determined, confident young people.”

Discussing the difficulties that come from a career in Martial Arts Philip expressed “Fighting professionally in MMA is very tough, both mentally and physically. Keeping on top of everything can become almost like a pressure cooker when you add in a countdown to the day you’ll be locked in a cage and have to fight another person. Fight camps are tough, they’re mentally draining and you have to have everything planned out or you’re heading for disaster.”

In 2019 Philip joined the IMMAA youth coaching panel and travelled to Rome, Italy to coach the Irish cadet MMA team at the first ever IMMAF Cadet MMA World Championships. He claimed “After experiencing the IMMAF MMA championships I was so disappointed that that opportunity didn’t exist for me when I was starting out. It’s a brilliant, well run organisation that gives invaluable experience to amateur fighters. Getting to coach the athletes from clubs all over Ireland and see everyone helping each other out was inspirational. Any club rivalry completely disappeared and everyone came together as Team Ireland. It was great to see that a small country like Ireland can medal on that scene and it shows our standard as a country, it was a very eye-opening experience.”

When asked about which fighters he was inspired by Philip answered “My favourite fighters were the Diaz Brothers. I loved that they were fearless, they weren’t athletes, they were fighters. I really respected them in the way they came from nothing and worked their way up. They didn’t care about any media and I related to them in that way. I’ve never been big into doing interviews and I’m not the type of fighter that you’ll see plastered all over instagram trying to pretend to be something I’m not. As my career progressed I looked up to my own teammates a lot too. The original SBG fight team, they all know who they are. We all banded together and put in a lot of blood sweat and tears into those years of training. Sometimes I wish I could go back in time to those days and relive them all over again.”

Revealing the ways in which MMA has benefitted his life Philip claimed “MMA changed my life completely at a time when I was going down the wrong paths in life. It’s given me endless opportunities, it’s my livelihood and I wouldn’t be who I am today without MMA. Everyone I know and everything I do revolves around martial arts so basically it gave me a new lease of life.”

Explaining how he has coped during the lockdowns Philip stated “It’s been a big change and I’m doing what I can. I haven’t been able to train with the lads in Dublin but it’s given me the opportunity to focus on other areas such as flexibility and mobility. You just have to take whatever positives you can from it and just continue to plan, work hard and move forward.”

Addressing his plans for the future Philip revealed “I’m currently on a four fight contract with Bellator, I’m focused on winning those fights and reopening the doors of SBG Portarlington. We’ve been working a lot on our promotion GAMA and I’m very proud to have been able to help novice fighters progress onto the amateur ranks. We’re about to enter into the amateur scene now too and are looking forward to creating new opportunities for fighters and contributing towards the future of Irish MMA.”

The Irish Mixed Martial Arts Association would like to extend our sincerest gratitude and appreciation to Philip for his ongoing support of the association and wish him and his team at SBG Portarlington the very best of skill and luck and they strive to accomplish their goals and contribute towards the success and progression of Irish MMA as a whole.