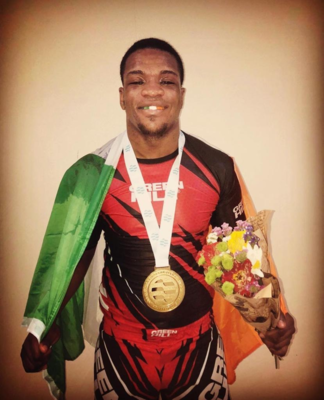 Q. How did you get involved in MMA?

A. I was getting in trouble a lot in school. I got a really long suspension from school, around 30 days and when I came back to school I didn’t know what I wanted to do. They were keeping an eye on me everywhere I went, acting as if I had been in prison or something. I used to go to the computer room at break time and search up Muhammed Ali on youtube, not because I wanted to be like him but because I thought what he did was so cool. I was in sixth year with only 3 months left of school and questioning what is there for me in the future. I was thinking about it while I was walking home one day and for some reason I decided I needed to go into spar. There was a guy in there wearing MMA shorts so I walked up to him and asked “Do you do UFC?” He laughed at me and said “It’s called MMA son. We train every day at 7:30pm, you should come and try it.” That turned out to be coach Deano. I asked my dad that day if I could start MMA and he was dead against it. He said it was for lunatics who fight like crazy but I decided to try it out. I was so scared walking into the gym for the first time, even though I was quite big, around 90 kgs at the time it was still scary because I thought these guys were going to be beasts who would try to tear me apart. I got stuck in with the training and Alex was the first person I sparred with so it was all very chilled and controlled.

Q. Tell me about your first MMA fight.

A. I had a few novice fights early on but my first amateur fight was against Brian Draper. At the novice tournaments there’s around 4 fights going on at the same time so nobodys paying too much attention to you but this was in a cage in front of a crowd. I was like ‘Oh my days, am I actually doing this’ but in a good way, not a stressful way, it was awesome. It was a great fight and he’s a great fighter. We’ve had two wars, I have nothing but respect for him and I’m looking forward to watching his next fight.

Q. What was it like competing at the IMMAFs?

A. The IMMAFs are very different to fighting in Ireland. I’ve been to three IMMAF tournaments now and most of my fights have been at the IMMAFs. I won Gold at the 2018 Europeans  and Silver at the 2018 Worlds and 2019 Europeans. The first day is the opening ceremony and there was even a fireworks show in Bahrain for the opening of the World championships. The next day the fights start and it’s a really crazy experience getting to see how differently fighters from all around the world fight, their fight IQ is absolutely amazing, it’s just mad. When it was time for me to fight it hit me like ‘I’m really about to go in and fight for my country, and that’s a different feeling, it’s a great feeling.

Q. Was it strange to be on the same team as fighters from rival clubs?

A. I don’t feel any rivalry with the other fighters, for me it doesn’t matter what club you’re with, if you’re in the cage with me then you’re my rival but other than that we can train together, and visit each other’s gyms but there’s no rivalry there. After my first loss at the IMMAFs there were a lot of people from other teams that supported me.

Q.What has been the best part of your MMA journey so far?

A. Just finding MMA is a highlight for me, joining CMAC and getting to be a part of this new family. The team that I have, has pushed me to win these medals and it’s very much a team effort. It’s the club itself that made me. If I had joined any other club I don’t think I would be as motivated. There’s a certain way you have to motivate me and my coaches have found the right way to do that.

Q. Is there anyone you would like to thank for supporting you in your journey?

A. The number one is Jesus, because I don’t know how Deano happened to be in spar that day when I decided to go in, even though I didn’t have any money to buy anything. All of my coaches and training partners at CMAC as well of course. I don’t know how they put up with me sometimes. They’re always there for me and always willing to help with anything. I’d obviously thank my family as well for letting me go training and my friends for all their support. I’d also like to thank my opponents as well, it’s not easy for them to get into the cage either and I appreciate their sacrifices and the challenges they gave me. I’d also thank myself for all the hard work. I can be very lazy but I just love MMA so much that it’s made me push myself.

Q. Were there any obstacles that you had to overcome throughout your MMA journey?

A. I had to overcome pride and ego. I had to learn from all my losses and drop my ego. You learn and grow from every fight. The other obstacle was trying to convince other people that I have a chance in this sport. I think that can be a big one for any fighters. At first when you tell people you’re gonna make it in MMA nobodys going to believe you, but you’ve got to keep training and pushing yourself and then they’ll believe. I think another obstacle that I’ve had to fight, and I’m still fighting with now is food.

Q. How has MMA benefited your life?

A. I’m much calmer. Ever since I started MMA I don’t like to see people fighting on the streets. Whenever I go out with the guys and things start to get a bit heated I don’t get caught up in it. I’m much more controlled now and more of a peacemaker. I don’t like to waste time, I Try to do something everyday that will benefit me. I’m much more focused and confident in myself too.

Q. How has the Covid outbreak affected your training?

A. The lockdowns definitely made me rethink my training. Not being able to fight or train in the gym plays with your head but it’s just another barrier to overcome and another reason to push yourself harder. At the end of the day it’s down to you, it’s not your coach or your teammates who need to make you work, it’s you. It can be difficult but I keep on going and never stop. I shadowbox every day and look for new ways to improve and push myself.

Q. What does the future hold in store for you?

A. UFC champ. That’s the main goal always. But for now I’m focused on getting as many fights in as I can. I’m working on it but the future is always going to include that UFC title belt. My dream fight would be Khabib, even though I’m a heavyweight and he’s retired. I don’t think he’ll return to UFC, he doesn’t need to. He’s done it all and earned his rest but I would have loved the opportunity to fight him.